In my opinion, this set is pretty good (mainly because of Hawkeye and Hulk). I don’t really like the Iron Man at all and the Loki is just OK. Hawkeye and Hulk are definitely my favorite of the set.

To search eBay for these figures:

Today we are going to be doing a Walmart Exclusive Comic Collection Review.

The figures are repacks but they aren’t too bad of repacks. Well aside from the Hulk. 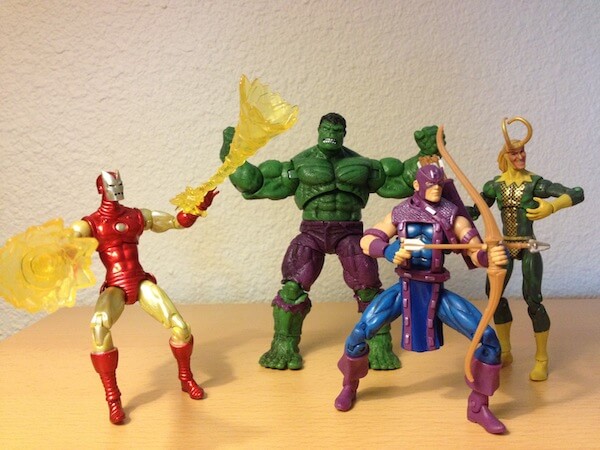 We are going to see a Target Exclusive Avengers 8 pack coming soon. I hope that it is going to be a good one because I hate Walmart with a passion. If they didnt get exclusive action figures then I am pretty sure that I would never step foot in Walmart.

Lets take a look at the packaging. It is pretty decent, just like the rest of the Avengers line of packaging. Nice window display.

Let’s start this Walmart Exclusive Comic Collection Review with Iron Man. He is a terrible figure. I doubt that anyone could possibly be buying this comic collection just for the Iron Man. The great thing about this classic Iron Man is that he comes with not only 1 but 2 energy blaster effects.

Loki is a repack from the Frost Giant Gigantic Battles set that was also exclusive to Walmart. I would say that this figure is decent but not great. Though he is the only comic version of Loki that we have got in 3.75″ size. If you were one who missed out on the Loki last year then you could used this chance to secure one finally.

Up next we have Hawkeye. He was a repack from the Secret Wars comic pack. He was a hard to find figure even though he was not an exclusive to any store. This figure has great articulation and comes with his bow, arrow, and quiver. This figure became amazing as soon as I was able to get him out of the ridiculous packaging. It took me about 10 minuets to get all 4 of the figures out.

Then we see the superstar figure of the pack. The Hulk. This figure is amazing. Love the sculpt and articulation. He has a ball hinged neck, shoulders, elbows, torso, hips, knees, wrists, and swivel biceps. This figure is great thought I would prefer if the ankle articulation would be a little bit better. He has 2 Hulk smashing fists as any Hulk figure should have.

In my opinion, this set is pretty good(mainly because of Hawkeye and Hulk). I don’t really like the Iron Man at all but the Loki is just ok. Hawkeye and Hulk are my favorite of the set.

UPDATE: eBay is your best best to score these figures. Click this link to: Find the Walmart Avengers Comic Collection on eBay.

What do you think about the Walmart Exclusive Comic Collection Review?