A while back, we got a selection of Batman: Animated Series action figures shipped to us from DC Collectibles. And, after doing the review for them, we had so much fun that we made an animated stop motion short to show them off a little.

So when we got an email with an updated, full release schedule for all of DC Collectibles upcoming Batman: Animated Series action figures, and well as New Batman Adventures and DC Icons action figures too, we were pretty excited. So, let’s get to it!

Next month, we’ll be getting a 6-inch Batman and Robin figure 2 pack, complete with a bat signal, as well as a Deluxe Batmobile (the batmobile is a roomy 24 inches long). You can pick up your Batman / Robin / Bat-Signal set up at Entertainment Earth for $59.99, and the Deluxe Batmobile set as well, for $139.99. Keep in mind that the Batmobile comes with the Batman, Robin, and the Batsignal as well for that price.

Just in time to help spread the Thanksgiving cheer, we’re getting 6-inch action figures for Harvey Bullock, Ventriloquist and Scarface, Talia Al Ghul, The Joker, Clayface, Firefly, and the Anti-Fire Suit Batman, all of who come with cool accessories as well.

Pre-order Ventriloquist and Scarface at Entertainment Earth for $23.99

Pre-order The Joker at Entertainment Earth for $23.99

Pre-order Clayface at Entertainment Earth for $34.99

Pre-order Firefly at Entertainment Earth for $23.99 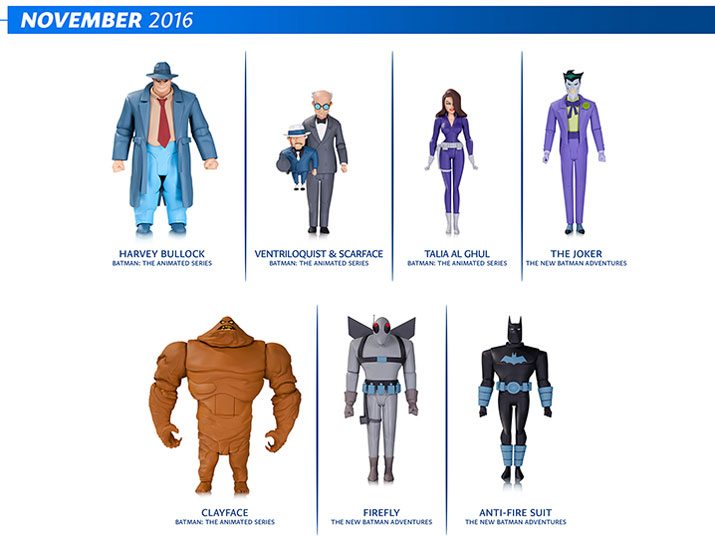 If you’re looking for the perfect present for the Batfan in your life, how about the Batwing? Or the awesome Christmas with the Joker action figure, complete with his very own tree! You can pick up the 36-inch long, 25-inch wide Batwing (which fits 2 figures, no less) over at Entertainment Earth for $144.99. The six-inch Joker figure is available as well for $23.99.

February will see the arrival of the “Girls Night Out” 5 pack of inch figures, including Livewire, Poison Ivy, Supergirl, Batgirl, and Harley Quinn. You can pre-order a set over at Entertainment Earth for $69.99.

Finally, in March of 2017, we’ll be getting a Legends of the Dark Knight 3-pack, with Batman, Robin, and the Mutant Leader. We’re also getting the Batman Expressions Pack (which comes with a Batman figure) so you can put Batman in just about any situation with the right expression, and the Riddler and Catwoman from New Batman Adventures. You can preorder the Legends 3-pack for $55.99, the Batman Expressions Pack for $39.99, the Riddler for $23.99, and Catwoman for $23.99.

Phew! And there you go. Personally, I can’t wait for November. Bullock, the Joker and Clayface are MINE!  MINE I TELL YOU! MWUAHAHAHAHAHAHA! *Ahem* Sorry.