Square Enix makes some pretty nice figures. And every so often, they come up with some really cool versions or alternates for traditional characters. Such is the case with their new “Rogues Gallery Series.” The line of figures will reimagine how Batman would look when combined with his most iconic foes. The Joker and Two-Face were announced as the first combos for this new line, and Square Enix has now revealed official photos and some details for the Two-Face Batman action figure. And this is one character you’d definitely not want to run into in a dark alley. Or a well-lit one. Or anywhere, really.

As with the traditional Two-Face character, the figure is half normal and half disfigured. The normal Batman half looks like a traditional Play Arts Batman, while the other half looks like a nightmare. On the Two-Face side, the jaw, teeth, and eye are exposed, you can see exposed musculature up and down his body. And, in a very cool touch, his armor and cape are similarly warped and degraded. Seriously, this figure looks amazing.

The figure will be approximately 11.4 inches (29 cm) tall, and will come with several interchangeable hands for both the normal and damaged sides, an alternate portrait, a grappling gun, and a Two-Faced Batarang. 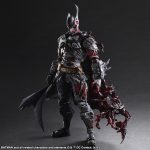 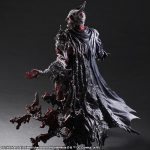 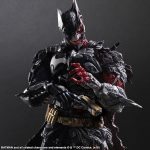 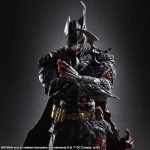 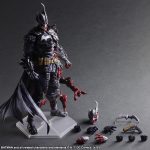 Right now, the Two-Face Batman action figure is up for pre-order on Square Enix’s official store. You can also pre-order it on Entertainment Earth for the same price. It’s currently listed at $199.99, and has an expected shipping date of December 2016.

As mentioned, the Batman / Joker mash-up will be the next figure in this series.  There are no official details or photos of the figure yet, but if it’s as inventive and awesome as Two-Face Batman, we’re definitely in for a treat.