Guess what day it is? Sunday – A.K.A. Toy News roundup day! Though you should know that this isn’t going to be just any Toy News Roundup, it’s going to be the Toy Fair 2014 edition. Here we round-up all of the most important toy news of the week (which includes a lot of stuff from Toy Fair 2014) from our site, and also link you to any toy news that we didn’t cover. Let’s see what was revealed in New York this week, shall we?

THREEZERO ROBOCOP 2014, THE WALKING DEAD AND GAME OF THRONES
The week before Toy Fair was a pretty big one, as it was Wonder Festival in Japan. At this festival Threezero showed off some of their upcoming and already released figures. This was the first time that the public was treated to the full 1/6 scale figure of Tyrion Lannister from Game of Thrones.

MAFEX STAR WARS COMING
Medicom was also at Wonder Festival and they had a nice display of their MAFEX Amazing Spider-Man 2 figure. In this display Medicom placed a placard of their upcoming releases which included The Dark Knight, The Dark Knight Rises and MAFEX Star Wars.

HOT TOYS THE WOLVERINE
The Hot Toys The Wolverine sixth scale figure was released in China a couple of weeks ago sod Hot Toys and Bloggers have presented us with some final product photos. The figure has just started shipping from Sideshow Collectibles (I should have mine tomorrow), so if you want him your better order soon before he’s gone!

FUNKO GAME OF THRONES LEGACY
Right before Toy Fair 2014 Funko’s first Legacy Collection started to hit Barns and Noble stores around the US. After that happened Funko officially released the information and images about the figures. Check out all of the details about Funko’s Game of Thrones Legacy Collection figures here.

HASBRO’S CAPTAIN AMERICA: THE WINTER SOLDIER TOYS
Captain America is going to be returning to the big screen on April 4, 2014 in his second stand alone film, and Hasbro has a ton of toys hitting retail now based on that movie. Check out their full Captain America: The Winter Soldier 2014 toys lineup here.

THE WINTER SOLDIER SELECT FIGURES AND MINIMATES
During the last couple of weeks nearly all of the Captain America: The Winter Soldier merchandise has hit the internet, including Diamond Select Toys’ Marvel Select Captain America (stealth uniform) and Minimates. Look for them both to hit stores by April 4th.

GUARDIANS OF THE GALAXY MARVEL LEGENDS
Hasbro’s Guardians of the Galaxy Marvel Legends have finally been given the OK to come out of hiding. It looks like the lineup is going to contain the 5 movie based Guardians, as well as a couple of comics based characters.

HASBRO TEAMS UP WITH 3D SYSTEMS
Hasbro and 3D Systems have announced that they are going to be teaming up to co-develop, co-venture and deliver new immersive, creative play experiences powered by 3D printing for children and collectors later this year.

MAGIC: THE GATHERING LEGACY AND POP!
Toy Fair was a hit this year for Funko. They revealed a bunch of new Pop! and Legacy figures, including their Magic: The Gathering product. Both of their Magic: The Gathering Legacy and Pop! figures are going to have the same characters made – Jace Beleren, Garruk Wildspeaker, Chandra Nalaar, Liliana Vess, Ajani Goldmane and Nissa Revane.

NECA 1/4 SCALE
We have known for some time that NECA had plans to create a 1/4 scale Arkham Origins Batman, but what we didn’t know is that NECA also has plans to make a Heath Ledger 1/4 scale Joker from The Dark Knight. 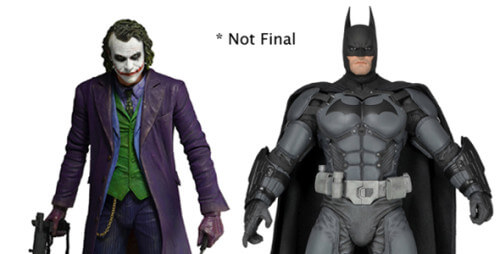 BIG BANG THEORY
Bif Bang Pow revealed a couple of Big Bang Theory items at Toy Fair 2014. First, they have their ReAction style 3.75″ action figures – then they had some Minimates as well.

STAR WARS BLACK SERIES 6 INCH IN 2014
The first wave of Star Wars Black Series 6 inch figures should be shipping now, but what about the figures for the rest of the year? In wave 2 you can look forward to Anakin Skywalker (EP3), Chewbacca (EP4) and the Clone Trooper (EP4). Wave 3 will contain Darth Vader (EP5), Luky Skywalker (EP5), and another Sandtrooper, but this time with a black shoulder cauldron. That’s not all though. Hasbro has also announced two deluxe releases of Jabba the Hutt and the Speeder Bike Scout with bike.

ALIENS SERIES 3
NECA‘s 3rd series of their #1 selling Alien action figures is set to include Kane in Nostromo Spacesuit from the 1979 Alien film and comes in special 35th Anniversary packaging, Bishop from the 1986 Aliens film and features likeness of actor Lance Henriksen and finally the long-awaited Dog Alien from the 1992 Alien 3 film.

PREDATORS SERIES 12
Predators Series 12 might even surprise the biggest Predator fans, as NECA is introducing their first ever Predator action figures from Dark Horse’s Bad Blood comic book, along with a new and improved Elder Predator from Predator 2.

THREEA DOCTOR DOOM
ThreeA’s Invincible Iron Man sixth scale figure has just recently went up for pre-order, but who wants to buy into a new line without seeeing other figures? At Toy Fair 2014 ThreeA showed off the Doctor Doom prototype. It’s surely different, but I think it’s going to be something to be desired.

HE’S BACK!
He said he would be back, but who would have thought he would come back as a Hot Toys figure? This is Hot Toys 2nd attempt at the Battle Damaged T-800 Terminator sixth scale figure and it looks like Hot Toys has made some much needed improvements over their first attempt.

FUNKO AND HIKARI VINYL
Apart from Funko’s debut of many new Legacy and Pop! figures at Toy Fair, they also announced a brand new toy line, Hikari Japanese Vinyl Figures. Many hot licenses will be getting the Hikari treatment this year.

MATTEL AT TOY FAIR 2014
Mattel at Toy Fair 2014 could potentially mean disappointment, but this year I think they pulled it together and are going to have a great 2014. They revealed a new MOTUC Sub, 3.75″ Batman 7-pack, DC Universe Super Powers figures, a DC Universe Total Heroes exclusive, more MOTUC and even some MOTU Minis.

SIMPSONS GUEST STARS SERIES 2
NECA is going to be introducing 8 new celebrities to be part of their Simpsons Guest Star Series 2 action figures, including Pete, John, and Roger from The Who, Mark Hamill, Britney Spears, Lucy Lawless, Tony Hawk, plus a brand-new version of Maggie Simpson.

1990 MOVIE TMNT
TMNT was hot at Toy Fair this year. So hot that Playmates Toys has revealed some new Classic Collection 1990 Movie Figures. The figures aren’t 100% accurate, but I think TMNT fans should be happy with the announcement.

NECA GODZILLA
NECA has announced that 1985 and 1994 Godzilla figures are going to make up series 1 of their ‘Classic Series’. Each figure stands about 6 inches tall and features all of the detail like they had in Godzilla 1985 and Godzilla vs. SpaceGodzilla. 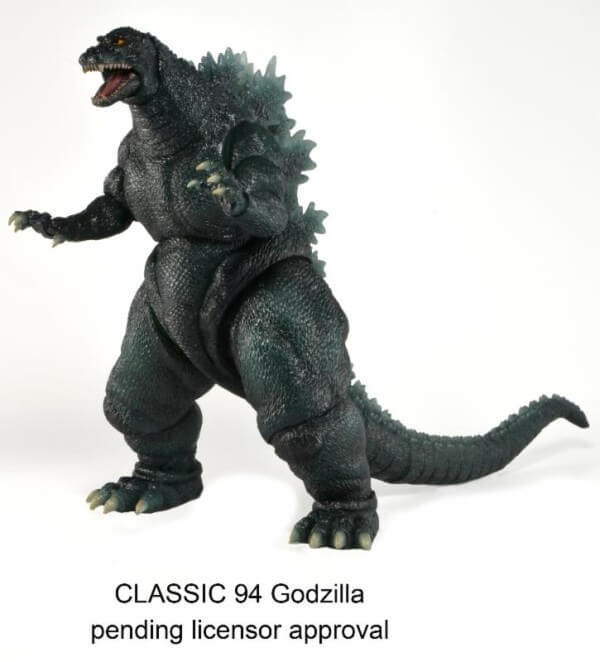 G.I. JOE 50TH ANNIVERSARY LINE
G.I. Joe turns 50 this year and Hasbro is going to have a Toys “R” Us exclusive G.I. Joe toy line to celebrate. Look for the new figures to start hitting in March.

DELUXE ROBOCOP
Brought back by popular demand, the future of law enforcement is about to get the ‘deluxe treatment’! Robocop is sporting a brand new look, what NECA is calling the Deluxe Robocop 3 action figure.

24 INCH KENNER ALIEN
A lot of companies are doing something special for the Alien 35th anniversary, including Gentle Giant. They have finally announced their 24 inch Kenner Alien action figure, which is actually based on the original 18 inch Kenner Alien. 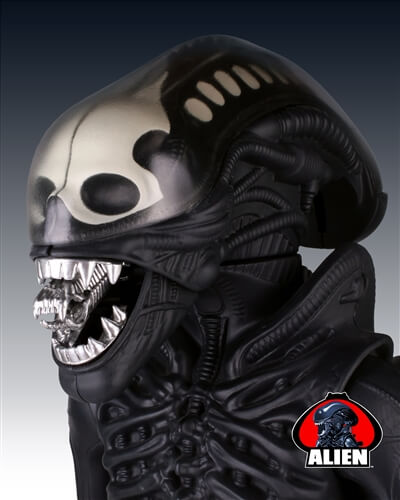 NECA TOY FAIR 2014 PRESS RELEASE
As Toy Fair was coming to a close NECA issued their Toy Fair 2014 Press Release, which outlines some of NECA’s upcoming products – some of which weren’t even displayed at Toy Fair. Hint: RIPLEY IS COMING

DC COLLECTIBLES MAY 2014 SOLICITS
The DC Collectibles May 2014 Solicits were released this past week. This month DCC has solicit a ton of new products, many of which were seen for the fist time at Toy Fair 2014.

KOTOBUKIYA ROCKET RACCOON ARTFX+
Hasbro and Gentle Giant weren’t the only companies to reveal Guardians of the Galaxy merchandise this past week, Kotobukiya has also revealed their Rocket Raccoon ARTFX+ statue.

GEONOSIS BATTLE DROIDS
If you are a fan of droids in the Star Wars movies, you are going to want to check out Sideshow Collectibles new Infantry Battle Droid and Battle Droid Commander figure sets.

TONY STARK’S CAR RACING SUITS
If you have been itching to get you hands on a 1/6 scale Car Racing Suit like the one that Tony Stark wears in Iron Man 2, itch no more. Super Duck and Verycool Toys have just finished their suits, each of them featuring something a little bit different.

ACID RAIN
This week our site sponsor Big Bad Toy Store has put up a new pre-order for some 3.75″ Acid Ran Figures. You can also buy small vehicles that transform. They are really worth checking out, even if you don’t collect 3.75″ figures.