Today is Sunday and it’s time for another weekly edition of the Toy News Roundup. Here we round-up all of the most important toy news of the week from our site, and also link you to any toy news that we didn’t cover. Let’s see what the big toy news was this week, shall we?

HOT TOYS INTERVIEW
The fine folks over at One Sixth Republic were able to get an interview with Hot Toys. In the interview they discuss some upcoming/cancelled figures. Read OSR’s Hot Toys Interview here.

BATMAN 75 YEARS (VIDEO)
Batman’s 75th anniversary is still going strong thanks to everyone at DC Comics. They have released a new video that shows a ton of action figures that DC Collectibles made through the years, including figures from their early DC Direct days.

THREEZERO’S ATLAS TITAN GETS PAINTED
This week, Threezero has finally presented collectors with a painted prototype of their upcoming Atlas Titan from the hit video game Titanfall. This preview also gives you a pretty good look at the 6″ pilot that is going to be coming with it.

NECA DIVERGENT
NECA’s line of Divergent movie figures have now received official images. They each stand about 6.75″ tall and should be available this June (assuming that the DVD release date doesn’t get delayed).

I AM DENNIS RODMAN
Storm Collectibles, a brand new sixth scale manufacturer, has presented their first 12″ figure. They have coined it to be the ‘I Am Dennis Rodman’ sixth scale figure and it’s currently available for pre-order.

ASSASSIN’S CREED SAGA SERIES 3
McFarlane Toys is at it again, this time with the announcement of Assassin’s Creed Saga Series 3. The lineup is set to include Altair Ibn-La’ahad (the protagonist of the first game), Ezio Auditore Da Firenze, Ah -Tabai (Edward Kenway’s  mentor  from Assassin’s Creed: Black Flag) and even an unknown figure. Who could it be?

PREVIEWS EXCLUSIVE DEATHSTROKE
Diamond Comics is going to be getting another pretty good exclusive this year, a Previews Exclusive Funko Pop! Deathstroke vinyl figure. He’s going to be available in both regular and metallic color ways.

NEW MOTUC BIOS
This week Intergalactic Skeletor, Flogg, and Extendar had their bios revealed. Of course, the He-Fans exploded with rage about everything they could think of. You know, the norm after anything Masters of the Universe is revealed by Mattel.

NECA’S 1/4 SCALE BATMAN ARKHAM ORIGINS
NECA’s quarter scale Batman Arkham Origins figure has just started shipping to retailers from the NECA warehouse. If you missed the chance to pre-order this hot figure, NECA is going to be doing a rare restock this July. Don’t miss it this time or you will be sorry! 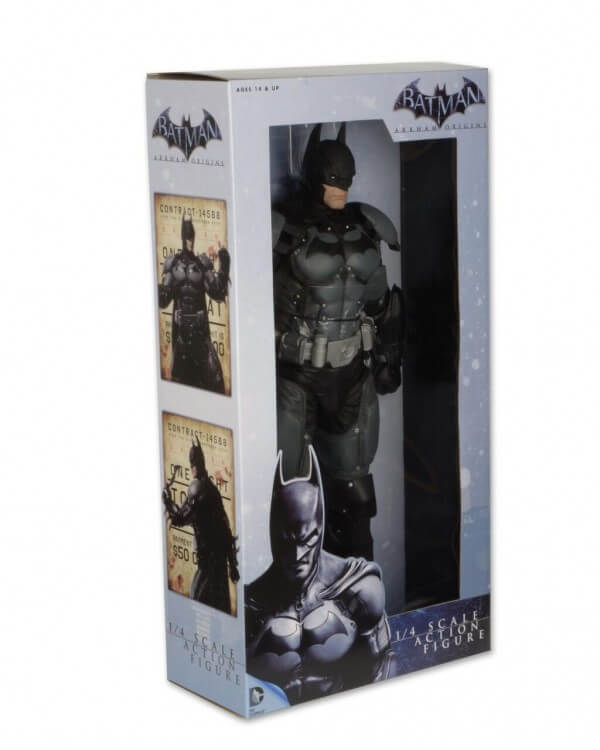 TOY NOTCH LOST PLANET
You may or may not have seen Toy Notch’s Lost Planet figures in the past few weeks. If you haven’t be sure to check them out. They are 4 inch figures that were created specifically for the collectors market.

THREEZERO TAKES ON DEAD SPACE 3
Shown a couple weeks ago in a Toy News Roundup, Threezero has now officially announced that they are going to be taking on the Dead Space 3 license. The prototype could have been seen at the 2014 Thailand Toy Expo.

ULTIMATE ’66 BATMAN CRIME FIGHTING ACCESSORY PACK
Figures Toy Company, one of the current industry leaders in reto Mego style figures, has presented a 25-piece “crime fighting accessory pack”, which will outfit Batman and Robin with much of what is seen in the 1966 Batman movie, as well as the equally popular TV series that starred Adam West and Burt Ward.

HOT TOYS TONTO
The Lone Ranger didn’t too to hot at the box office. In fact, it ended up loosing money, but that didn’t stop Hot Toys from going through with their Tonto sixth scale figure! Check out some final product photos at the link provided.

MATTEL SDCC 2014
Mattel has started to slowly reveal their SDCC 2014 exclusives. This week, they revealed DCUC Doomsday and MOTUC Hordak as San Diego Comic-Con 2014 Exclusives. Fans were disappointed to say the least.

HIYA TOYS ALIENS COLONIAL MARINES
If you are into 4″ scale action figures, Hiya Toys has something for you. They are going to be making figures based on the Aliens: Colonial Marines game. They have started off with several of the Aliens and hopes to get to the human characters later on down the line.

THREEZERO AT THE THAILAND TOY EXPO
This weekend is the 2014 Thailand Toy Expo and you can bet that Threezero was in attendance to show off some of their new prototypes. At the show they showed off the Atlas Titan (Titanfall), Isaac Clarke (Dead Space 3), and Tyrion Lannister (Game of Thrones) prototypes.

MINIMATES TAKE OVER THE COVER OF AMAZING SPIDER-MAN #1
Ever since 2003 when the first series of Marvel Minimates was released, Diamond Select Toys has been giving all of your favorite characters the Minimate treatment. It’s only fitting that DST’s most produced Minimates character would become a variant cover for Amazing Spider-Man #1.

LIFE-SIZE BOBA FETT
Sideshow has taken one of the Galaxy’s most popular characters and made him into an incredible life-size figure. The Boba Fett Life-Size figure stands 6.5 feet tall and is currently available for pre-order.

FIGMA AVENGERS CAPTAIN AMERICA
Figma has been killing it with their recent The Avengers releases. Their latest release is going to be the Figma Captain America, which is equally as awesome at their other releases.

FUNKO POP! STAR WARS SERIES 6
If you thought that Funko’s previous Star Wars series’ have been epic, wait until you see the Funko Pop! Series 6. It comes complete with a super-sized 6″ Wampa!

HOT TOYS IRON MAN 3 BUST SERIES 2
Hot Toys has continued to release more Iron Man suits that had milesecconds of screen time in Iron Man 3. Case and point would be the Hot Toys Iron Man 3 Bust Series 2, which features some really goofy looking Iron Man suits that I can’t even recall from the movie!

DEADLY FOES OF SPIDER-MAN MINIMATES
This week, Luke’s Toy Store has teamed up with Diamond Select Toys to offer the Deadly Foes of Spider-Man Marvel Minimates as a LTS exclusive.

STAR WARS BLACK SERIES SDCC 2014 EXCLUSIVE
Hasbro got in on the Star Wars Day celebrations a day early with the announcement of their SDCC 2014 Exclusive Star Wars Black Series Jabba The Hutt. He’s going to come with Salacious Crumb and his hookah, making the ultimate Black Series display (if you were able to get the SDCC 2013 Boba Fett and Han Solo).

ORI TOY’S ACID RAIN LINE
Ori Toy’s brand new Acid Rain line has gone up for pre-order and some of the figures are even in stock now at BBTS. This is another line that would fit in perfectly with G.I. Joes, but will set you back nearly double what a G.I. Joe would cost you.

SIDESHOW AND STAR WARS DAY
Today is Star Wars Day (as if you didn’t already know) and Sideshow Collectibles has been celebrating hard. They have already revealed a Deluxe R2-D2 sixth scale figure, as well as a Life-Size Yoda figure. Both are up for pre-order now!

FUNKO ADDS BREAKING BAD
Funko has a ton of licenses, but they just got one of the most fan demanded license since the show concluded: Breaking Bad. From Brian (Funko’s CEO) himself via the Funko forums:

“We may have some happy campers as these are being rushed into production as we speak !!!
A huge line up is planned including a Winnebago Pop Ride!!”

ENTERTAINMENT EARTH STAR WARS DAY SALE
Entertainment Earth is currently having a huge Star Wars Day sale. You can save up to 40%, even on Black Series figures! Most of the items are only on sale for today only, so check it out quick!

NEW STAR WARS FROM FUNKO
Funko has announced that they have made a few limited edition Star Wars figures for Journeys and they are wearing VANS! To get a figure, purchase some shoes here.