This year I decided to make one list compiling all the lines that I collected last year. Though this year I’ll be doing individual lists for top 10 Marvel Legends, top 10 NECA figures etc as I know I’ll get a lot this year and this year’s going to be incredibly exciting for collectible figures! Anyway on with the list: 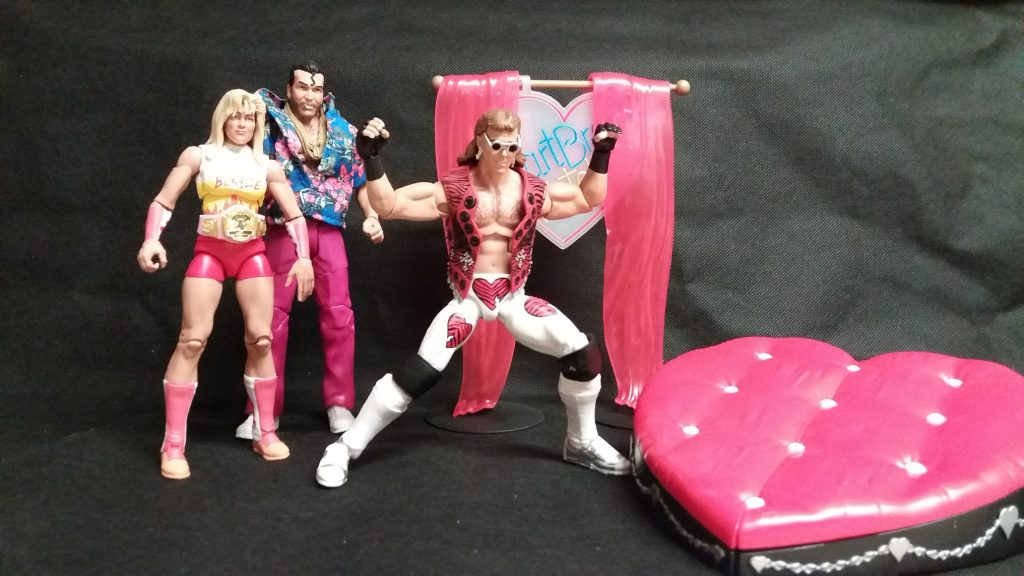 When I was in the United States last year I was very fortunate to come across these figures in Walmart. I had no knowledge of this series until I found them in store. The only figure that I didn’t pick up from this series was Doink the Clown because I couldn’t find him on the store shelves.

This series is absolutely fantastic as you get to build parts of Shawn Michael’s Heartbreak Hotel interview set and you get some fantastic figures. The Razor Ramone is a very unique figure as we’ve never gotten one from a promo before and I love that shirt!

The Alundra Blaze makes her appearance in the line for the first time and comes with a women’s championship belt. The Shawn Michaels in this series is my favorite Shawn figure as I know this attire is very iconic and Mattel have executed it perfectly. The paint, sculpt and articulation are great for Mattel WWE Elite figures. 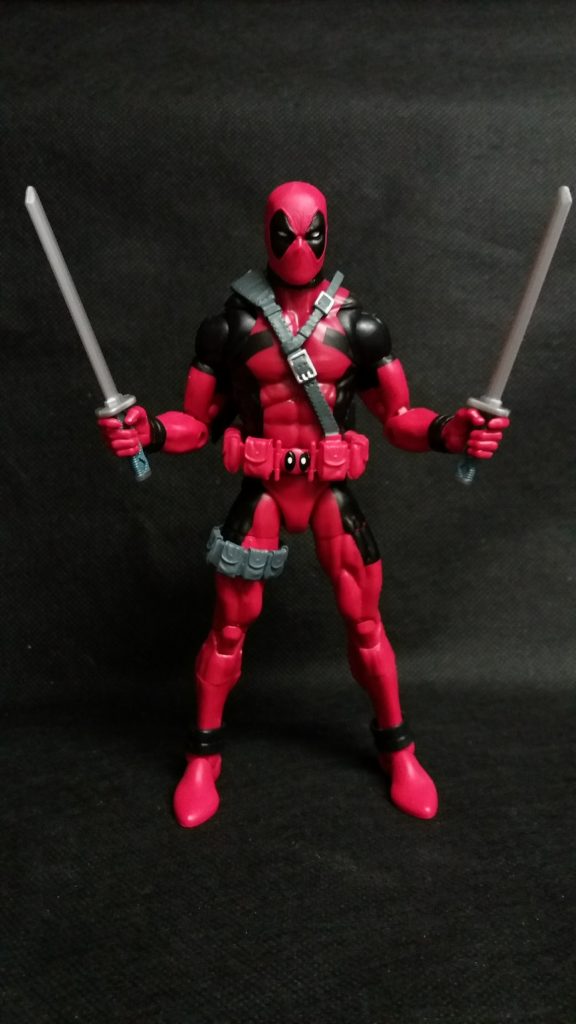 I was quite surprised to find that this Deadpool is one of my favorite figures released last year. I didn’t think of it too much till I got it in hand. I got into Deadpool in the early 2000s as a lot of Deadpool comics were reprinted in the Wolverine Vs Deadpool comic books in the UK.

His look was very similar to this, so you could say the nostalgia made me put it in my top 10. He’s quite smaller than the other Deadpool figures that Hasbro have released recently which makes him rather unique as well as the Rob Liefeld look to the costume.

He’s light on accessories but it’s still a fantastic figure. The paint job is very clean and the articulation is fantastic. Especially the butterfly joints in the shoulders. 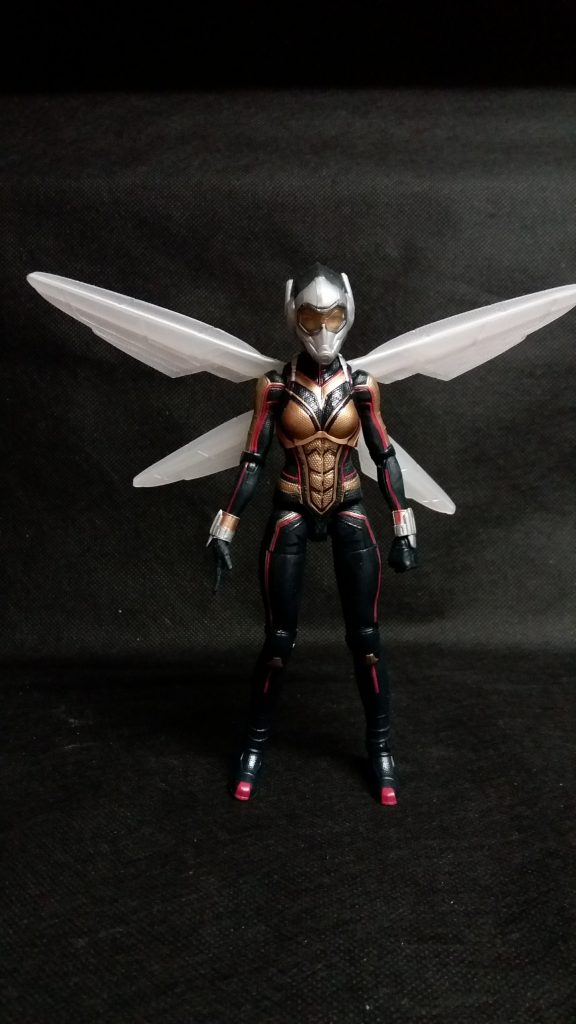 In my opinion, this one of the most underrated Marvel Legends released last year. There’s no doubt about that the photoreal tech has really revolutionized the MCU Marvel Legends. The likeness to Evangeline Lilly is absolutely fantastic.

The sculpt and paint detail are second to none, it’s almost S.H Figuarts quality. The articulation is great too for a female Marvel Legends figure. Hasbro included a number of accessories for Wasp including an interchangeable unmasked head, interchangeable hands, and wing backpack. 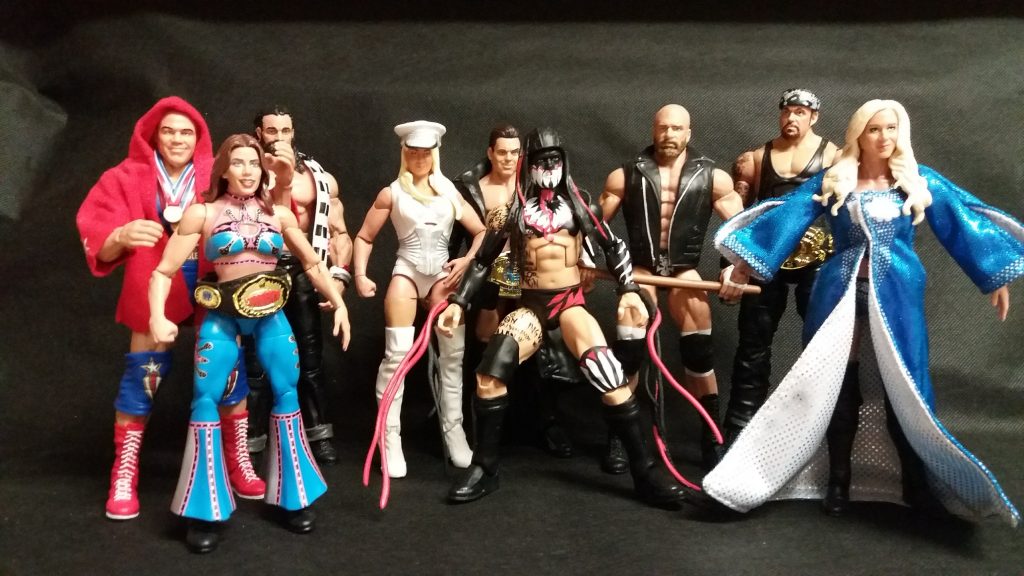 This year Mattel introduced Real FX to their WWE figures and most prominently in their Elite line. Also this year they debuted the new art stand dioramas which are a big improvement over the build a cardboard diorama.

The Photoreal has greatly improved the quality of the figures much as it has done for Hasbro. I always love soft good cloaks and jackets and Charlotte Flair’s coat is simply incredible, it’s well tailored and full of detail. I do love soft goods as it doesn’t inhibit the articulation.

I was very happy to get this Demon Finn Balor and it’s the best figure of this character to date, the detail is outstanding especially in the body paint and the eye on his back! I adore the Mickie James figure the likeness is great and the attire looks fantastic as well and the belt she comes with is just the icing on the cake.

Overall 2018 has been a great year for WWE Elite figures with a great selection of old and new wrestlers and 2019 looks even better! 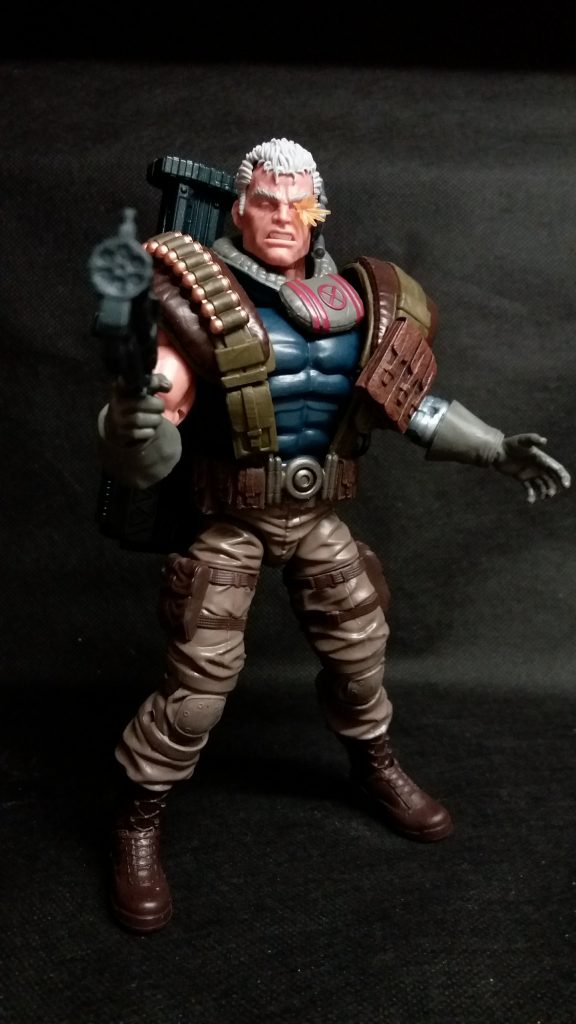 2018 has been a fantastic year for Marvel Legends fans their’s no doubt about it with a great character selection and many hitting that 90’s nostalgia sweet spot. When I was a kid I was a massive fan of the X-Men animated series you can bet I’ve wanted to get my hands on the ones they’ve released this year though sadly I haven’t got them all yet.

Though I have to say my favorite Marvel Legends figure this year is Cable. This figure is incredible and looks so 90’s with the big shoulder pads and big guns and covered with pouches and I love it! I know this isn’t based on the X-Men series but on Rob Liefeld’s artwork but it looks pretty close.

The articulation is great for such a bulky figure, the detailing is excellent especially in the head and the inclusion of three guns is great two of which can be stored on his back and belt holster. This figure looks so good in your X-Men 90’s line-up! 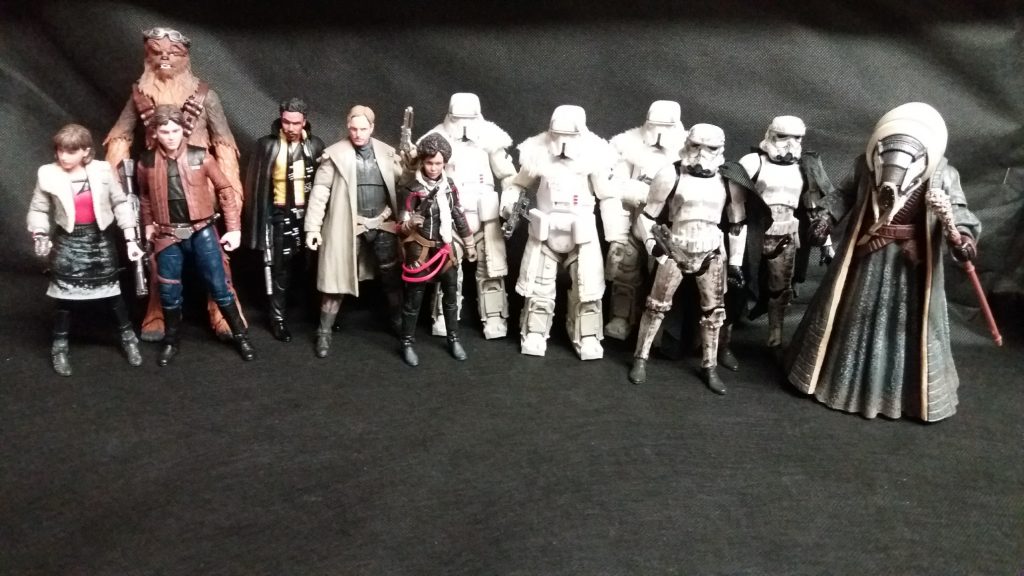 I make no shakes about it I’m a big fan of Star Wars: A Solo Story so you can imagine my excitement picking up the Black Series figures from the film. I can honestly say I wasn’t disappointed at all. The photoreal looks excellent on these figures making these figures look exactly like their big screen counterparts.

What helps is that I really loved the costume design in Solo as the characters have fantastic costume designs such as Beckett, Qi’ra, Lando, and Val. I have to say the Chewbacca that they released for the Solo line is my favorite Chewie figure it looks so good and looks more unique compared to the other Chewie’s that we have gotten from Hasbro.

I loved the look of the Range Trooper when Hasbro unveiled the figure of it and so far I have three and I have every intention of getting more of them along with the Mimban and Patrol troopers.

I haven’t completed the line-up yet as I’m still missing L3, Rio and The Patrol Trooper which I’ll be surely picking up this year. Of course, they’ll be more figure from Solo such as Mudtrooper Han and Dryden. Hopefully, they’ll be more such as an Older Qi’ra and younger Han to match up with their counterparts that they’ve already released. 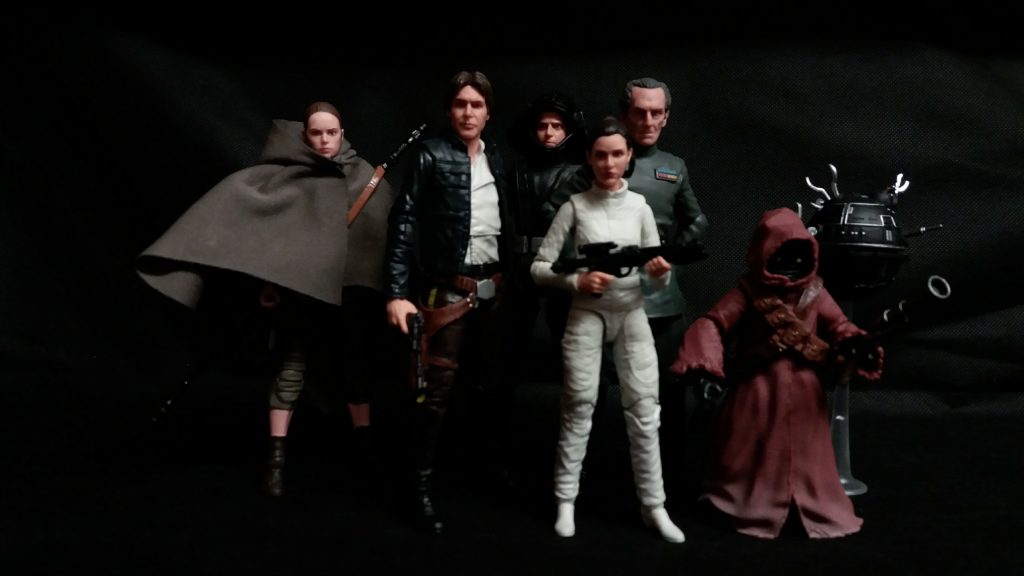 I know this may sound a bit of a cheat so hear me out, I have separated the Solo figures from the main line as they are from a film whereas these figures are from the other films in the saga. There’s no doubt that photoreal has changed the game for mass market action figures and is some firm competition for the Japanese import companies. Especially at the $20 price point.

I’ve been really excited to see Hasbro release characters from the original trilogy and they are simply incredible, the likenesses to Carrie Fisher, Harrison Ford, and Peter Cushing are undeniable. I love having them on display especially the Bespin Han, I love it. Also, the Island Journey Rey is a big step up from the first Rey figure released back in 2015.

I’m still missing a number of Black Series from 2018, which I’ll be picking up in the near future. Why I have ranked the Black Series as high as I have is because of how far they’ve come in the last year and things can only get better from here! 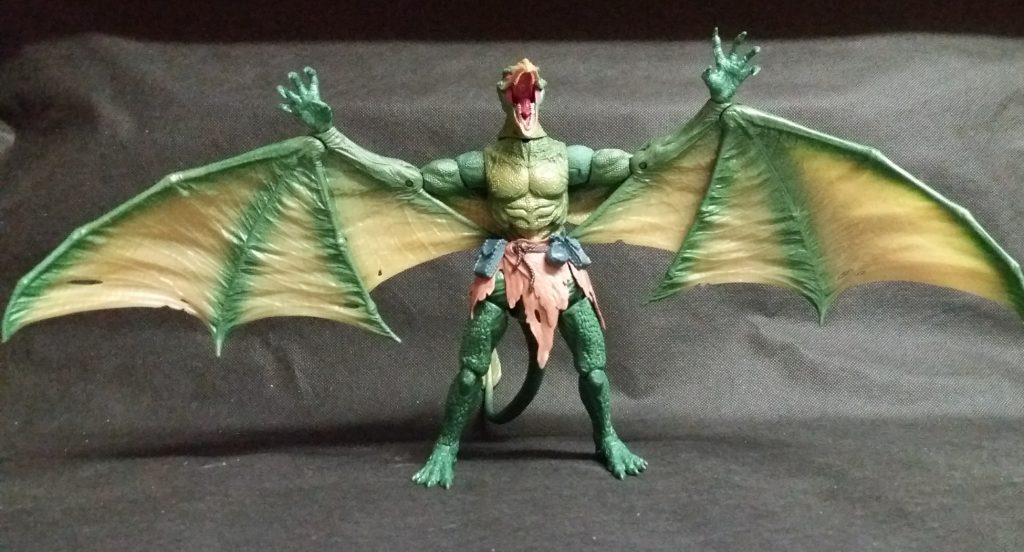 The only BAF that I was able to complete last year, which came out last year was Sauron from the second Deadpool wave. As you can see this figure is very imposing and looks absolutely fantastic.

The whole wave is very unique and fantastic with some brilliant figures, though Sauron outshines them all. The figure was very easy to put together and there’s no loose joints or anything. The detail in the sculpt is fantastic as you can see all the tiny scales all over his body.

He’s definitely a lot taller than your average Marvel Legend figure and I absolutely love the semi-translucent wings and the wingspan of them. I know quite a lot of people and reviewers have talked about how great this figure is and it’s very easy to see why it’s a fantastic figure. It’s my favorite BAF in my collection to date. 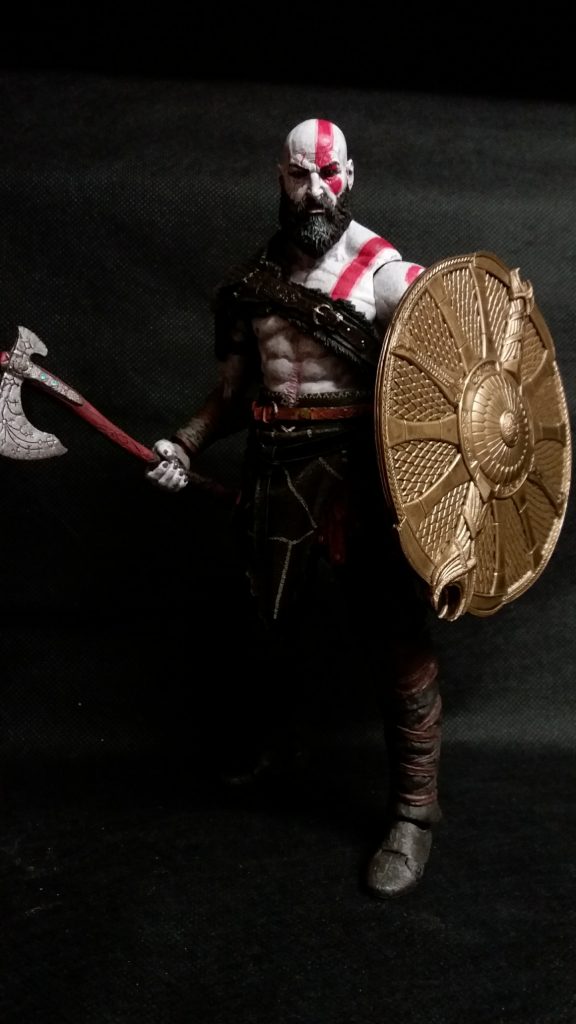 Last summer when NECA revealed that they have the God of War license by showing off this figure at SDCC I was blown away and loved the look of it immediately. The figure drooped in February of last year and I had to get one.

As I was highly anticipating the game I wanted to get this figure on my shelf and I wasn’t disappointed. Kratos is full of an incredible detail throughout the entire figure and his accessories. The amount of articulation is fantastic as well with Kratos so you can get him in plenty of poses.

Even better than this Kratos is the Ultimate Kratos and Atreus two-pack that’s coming out in a month or so time, which will contain the same awesome figure with plenty of added extras and boy!

Definitely one of the best figures released in 2018. 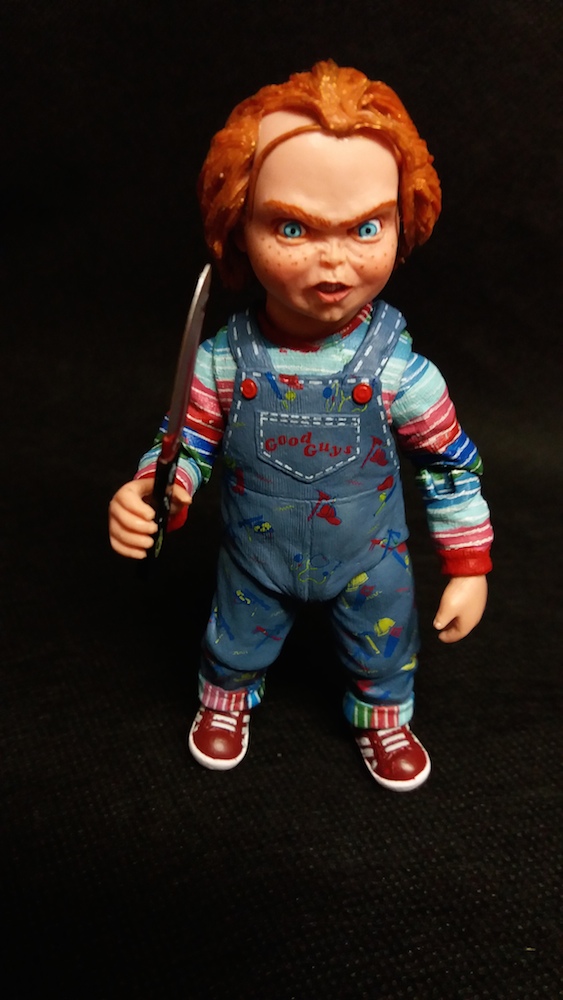 Now this one really took me by surprise. I was rather excited about Chucky with all the teasers that NECA had dropped until the figure released in the spring of this year. When I saw the final figure I knew it would be a must-have.

When I got it in hand I was astounded by the figure and all his accessories. This Chucky covers a number of the films in the series with his various alternate heads and accessories. This figure is absolutely outstanding and I can’t find a single error or problem with this figure it’s incredible.

If you want to know more of my thoughts on this figure check out my review of Chucky on the website:  https://www.actionfigurefury.com/neca-ultimate-childs-play-chucky/

If you haven’t got this figure and if your a fan of Chucky this is a must-have, along with the Bride of Chucky two-pack which is just hitting retail stores now.