The Leonardo action figure is absolutely worth picking up. He's got great articulation, really good paint, and an awesome sculpt. Kraang isn't as impressive, but for fans, at this price, he's worth a pick up as well.

To Order on Amazon

NOTE: These figures were provided to us by the manufacturers for review purposes. Our opinions are our own, and we speak only for ourselves, and not for the manufacturer.

I’m going to start off by admitting something. I have never seen Teenage Mutant Ninja Turtles: Out of Shadows. I was a fan of the 90’s cartoon series and have even read a few of the Mirage comics. I always choose Leonardo when playing the old side-scroller arcade game and will be a fan ’til the day I die.

But after seeing Out of the Shadow’s predecessor, I realized that the franchise was basically akin to the Transformer movies and I lost any interest in paying to see a sequel. Judging by the fact that the Rotten Tomatoes critics gave Out of the Shadows a rotten score of 38%, I figured I saved myself 8 bucks plus concessions (so, like $86). When we got the figures in, however, I could not help but get excited. While the Leo figure lacks the capital L on his belt and Kraang looks very different then his debut in the 1987 series, I figured I could get past it and check out these cool figures. 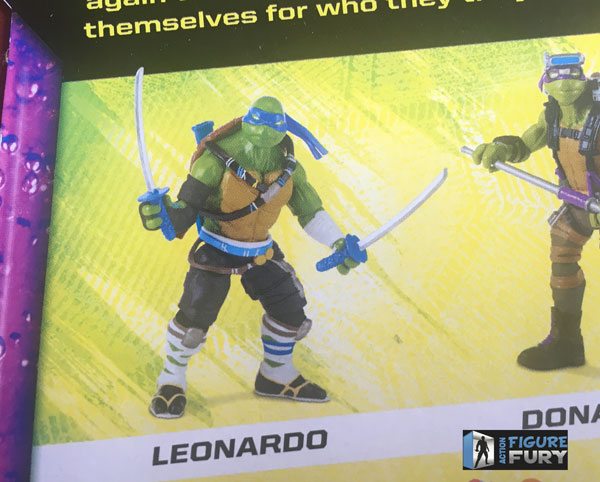 The packaging is pretty basic on these figures. Nothing to brag about and nothing to hate. Well except one thing. but I will get to that in a bit. The front of the packaging has clear plastic that lets you see the figure. The back has all the figures in the series lined up. Like I said, nothing too special. The one thing that bothers me, and I may be alone here, is that the Kraang figure shows Kraang fits perfectly in his android on the back of the package which . . . He does not. I will touch more on this later, though. On top of that, on the back of the package, it shows Leonardo’s swords with blue hilts. The figure itself has grey hilts which is nowhere near as cool. Otherwise, the packaging is fine. I am going to give the packaging a 2 out of 5 for false advertising. 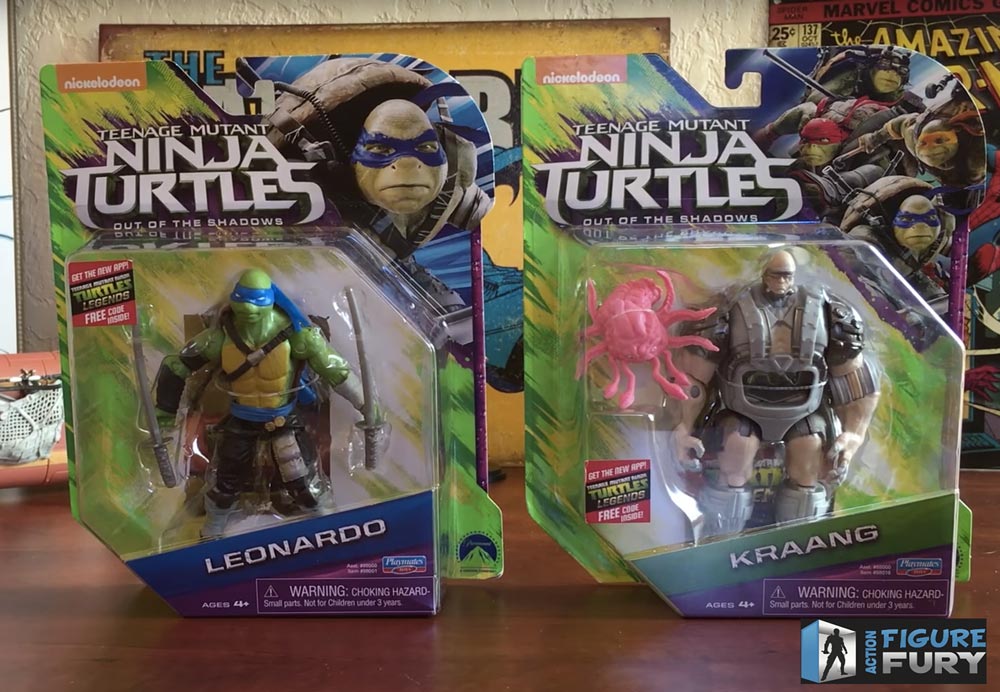 Kraang has a good sculpt though he is really just a brain with tentacles and a face. He is made entirely of a soft plastic and has good detail in both the brainy parts and the tentacle parts and looks pretty good overall. After I looked up what he looks like in the movie, I would say he resembles the cartoon series more than the movies. I’ll give Kraang a 3.5 out of 5. 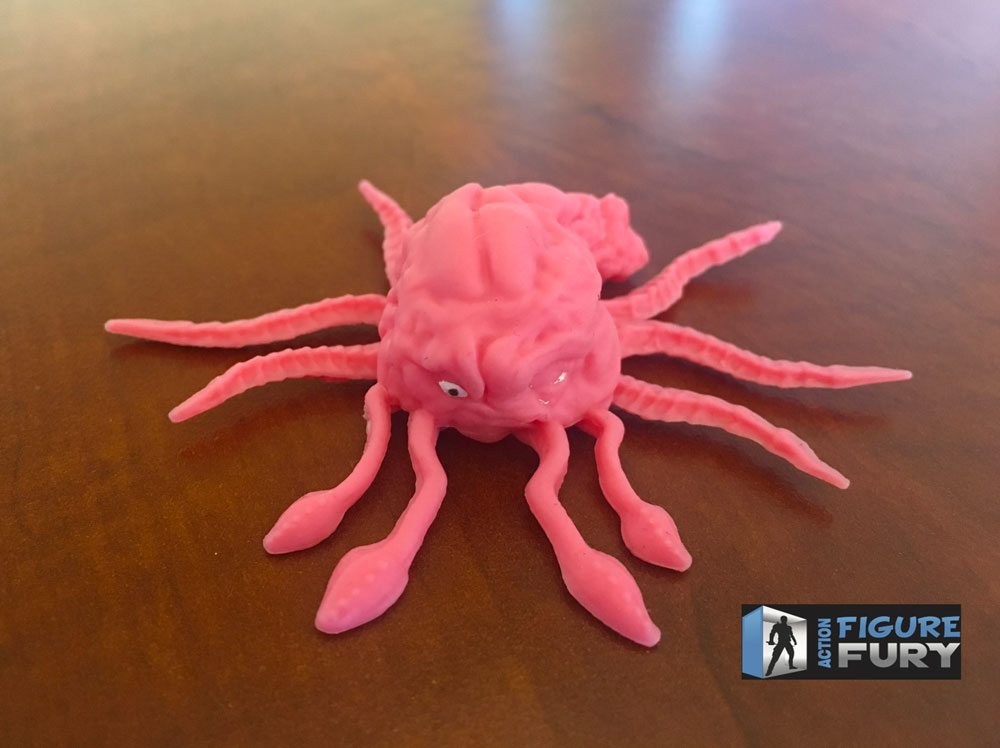 The android stands at 5 inches (12.7 cm) tall and the sculpt is average. There is good detail in all of his mechanical parts and he is over muscled which is exactly how he should look. Notable mentions are his face sculpt and his fingers. Both have good details. I would give it a 2.5 out of 5.

Leo stands at 4.5 inches (11.4 cm) and his sculpt is very good. His skin is all textured and it looks and feels great. His shell has awesome detail and I love that the tassels on his face mask are made of soft plastic. You can’t really position them but they look great! His legs have a wrap around them and you can see his skin under the wrap which was very cool! I have no real complaints when it comes to his sculpt so an easy 4.5 out of 5 on his sculpt.

Kraang’s paint is just in his eyes. The pink color of his . . . Skin? Brain? … the pink color is in the plastic so it’s not really paint but it looks great. His eyes are painted on and as I said earlier, his left eye came off when I tried to put him in his android which was very disappointing. I would give the paint a 2 out of 5 because of the eye thing.

The paint on the android is average. There is not really anything wrong with the paint other than some minor spillover where some of the skin paint meets the metal but nothing too visible. One positive note is that the face paint is very clean. The metal Visor does not spill onto the face. Also, the dark metal is generally very clean when meeting the lighter silver metal. I would give his paint a 2.5 out of 5.

The paint on Leo was very well done. There is some light spill over with the light tan paint on his sandals but otherwise, it is all very clean. His Blue face mask is very bright with no spill onto his green face which would have been very obvious so very well done there. One of the coolest parts of his paint is his legs. As I mentioned before, you can see his skin under the leg wrap and they managed to paint his skin green without spilling onto the grey wrap. I am going to go ahead and give the paint for Leo a solid 4.5 out of 5. Very well done!

There is no real articulation for Kraang. As I said before he is made of a soft plastic so if you manage to get him inside his android you could position his tentacles to come out in different ways but other than that there is really nothing to speak about. 2.5 out of 5

The android’s head can rotate 360° but his head is very stiff and his bulky shoulders make it a little harder to manage. His shoulders can easily rotate 360° and his right elbow both rotate 360° and bend to a 90° angle forward and back. His left elbow, however, can not rotate at all and can only be bent to a 90° forward angle due to the big gear they placed in his elbow.

He does not have a wrist joint on either arm. This causes some problems because his left hand is a little weirdly placed. If you position the joint so you get natural looking articulation, his hand/wrist looks like he is holding them in an odd way. Without the wrist joint, this can only be fixed by rotating the elbow joint. That makes it dos if you bend the elbow, he looks like he hyperextended his elbow. His right hand does not have this problem.

His legs have ball joints at the hip as well as in the knees. This gives the figure 360° rotation in those joints. His hip allows the legs to bend back around 45° and forward almost 90°. His knees can not bend forward but can bend back just short of 90°.

I am very happy that they decided to put ball joints in the shoulders, hip, knees and one arm. I would have liked to see the right elbow get a ball joint as well and I wish they either would have given the figure wrist joints or placed his left hand better. Overall I would give his articulation a 2.5 out of 5.

Leo’s head can rotate 360° very smoothly. In fact, his joint is a little loose so be careful when you are taking him out of his packaging. Like Kraang’s android, he has ball joint in his shoulders that allow for 360° rotation. They can also be bent up around 135°. Unlike the android he has ball joints in both of his elbows that allow for 360° and can be bent 90° inward. his right arm can bend back almost 90° while his left only a few degrees. Leo does have wrist joints that rotate 360°

His legs have ball joints at the hip and the knees. They rotate 360° and can bend back so his feet can almost touch his shell. His legs can bend forward 45° and with the help of his scabbards on his back he can sit down. He does not have any ankle joints.

I am super glad they put wrist joints on Leo considering he can hold his swords. His joints all have great articulation and you can get him into some pretty cool positions. I do wish he had ankle joints but I always want ankle joints. Who doesn’t? I would give his articulation a 4 out of 5.

I am not sure if you would say that the android is an accessory of Kraang or that Kraang is an accessory to the Android. All the same, since they can not be put together without looking like he was shoved in there as a form of torture. So I am just going to say that Kraang and the Android are supposed to be one piece and that he did not have any accessories.

Leonardo’s swords are the only accessories that he come with. Their sculpt is pretty good as the sword is straight and has no bends. The paint on them is fine but, as I said earlier, they were advertised as being blue in the hilt which would have been way, way cooler! They fit very well in his hands and are proportioned well with his body. I would give them a 3 out of 5.

Kraang was pretty average with some disappointments. The packing shows that you can have Kraang in his android in a way that I can’t seem to figure out. The sculpt on the Kraang and his android were pretty good but the paint was average and the articulation for the android had some weird flaws like the right arms articulation. Overall I am going to give his figure a 2.5 out of five.

Leo, on the other hand, was pretty awesome. although his package showed his swords having blue hilts when they are actually grey, his sculpt, paint, and articulation were fantastic especially for a figure for this price. I thoroughly suggest getting him as he looks great and can be positioned in some fun ways. I would give him a 4 out of 5. 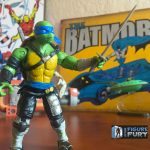 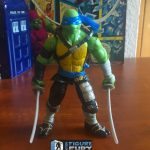 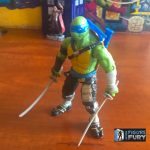 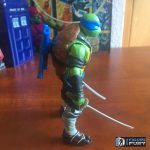 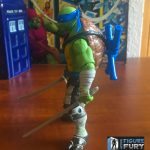 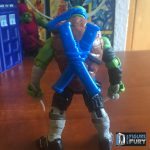 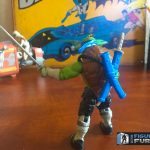 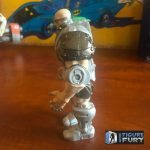 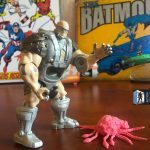 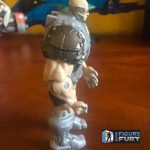 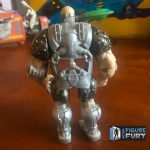 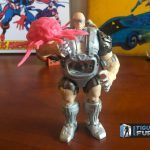 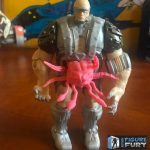 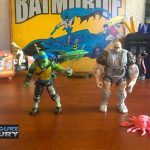 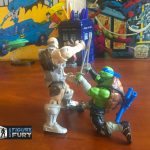 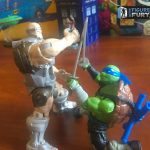 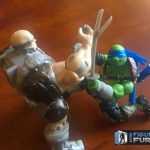 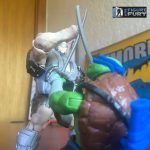 How Tall is the Leonardo Figure?

How Much Does the Leonardo Figure Weigh?

How Tall in the Kraang Figure?

How Much Does the Kraang Figure Weigh?

What Other Figures Are in the Playmates Toys TMNT Out of the Shadows Line?

Having been a closet nerd until the ripe age of 17, Christopher has "let out his inner nerd." Now at the age of 24, he enjoys avoiding long walks on the beaches so he can stay inside reading comics, watching youtube, and eating Pez from a Darth Vader dispenser.