UPDATE: This regular version of this figure is now available for pre-order through both Sideshow Collectibles and Entertainment Earth for $195.

ThreeZero is no stranger to either amazing action figures (check out their Titanfall Ogre) or Game of Thrones (with Jon Snow due out any day now, and Jamie Lannister arriving in October). So it’s no surprise that the ThreeZero Sandor Clegane action figure looks equally as amazing.

As with the other figures in their Game of Thrones line, Sandor Clegane is being done in 1/6 scale. The figure stands roughly 13 inches (33 cm) tall, and will feature an all new body developed specially for this figure. The head sculpt will feature an authentic likeness to actor Rory McCann, as he appears in the show. The figure will also have rooted hair. The figure will be clad in the Hound’s highly detailed armor, and will feature gauntlets and greaves as part of the armor. For accessories, the figure will come with a Greatsword, long sword, dagger, and katar, as well as back and waist belts with scabbards for his arsenal. In addition, he will also come with a pair of interchangeable hands.

ThreeZero will also be offering an exclusive version of the figure, which will come with The Hound’s signature helmet, as seen in the series.

The ThreeZero Sandor Clegane action figure will go up for pre-order on Thursday, August 18th, at 9 AM Hong Kong time. Hong Kong is 15 hours ahead of PST in the US, which I believe means 6:00 PM on Wednesday the 17th. 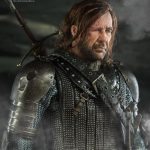 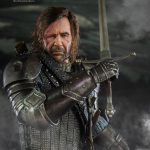 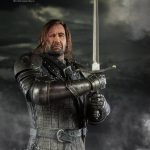 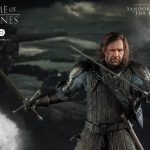 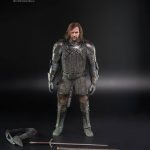 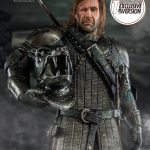 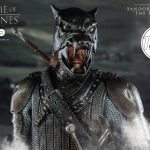 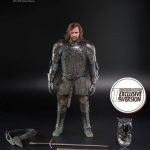 According to ThreeZero, the exclusive version will only be offered for a limited time. So, if you’re looking to add the Hound to your line-up, you should act fast.