Spider-Boy and Spider-Bot Are Here to Fight Crime

UPDATE: This awesome Spider-Boy and Spider-Bot action figure is now available for pre-order through Sideshow collectibles for $350 and Entertainment Earth for $359.99. Don’t miss out on this one!

No, no, this isn’t some weird Spider-Man Knock off. No, this is an officially licensed action figure. So, what’s up with the “boy” and the “bot”? Where’s the man?  Well, that would be a question for ThreeA. After some teasers, appearances at other shows, and a very long wait, they’ve finally revealed details and photos of their Ashley Wood ThreeA Peter Parker and Spider-Bot action figures.

Details on the ThreeA Spider-Bot and Peter Parker Action Figures

OK, first off, this is a two figure set. So you get both Spider-Bot and young Peter Parker. And second off, the reason those figures have that cool, sort of retro, almost sort of “western” but maybe not quite western, but definitely kind of an old-world feel to them? That’s Ashley Wood. (Which if you missed out on the Ashley Wood figures ThreeA announced just a bit ago, check them out as well.) I love it when they’re willing to take a chance on major, established characters and let them do something a little different (see also: Spider-Man as a Samurai).

So, what do you get with this fourth entry in the ThreeA Marvel team-up?  Well, they’re sixth scale, so Peter Parker will stand 10 inches (25.5 cm) tall, and features 32 points of articulation. Spider-Bot will be 15 inches (38 cm) tall, and feature 34 points of articulation, including fully poseable finger joints. Spider-Bot will also feature LED illuminated eyes.

Accessories wise, Peter Parker comes with 4 sets of interchangeable hands, a Robot Controller, a large cloth backpack, and a camera that has a flash, light meter, dust blower, and 4 interchangeable lenses (Standard Zoom, Prime, Telephoto, and Kit Lens). That’s right, this figure is so awesome that even the accessories have accessories. 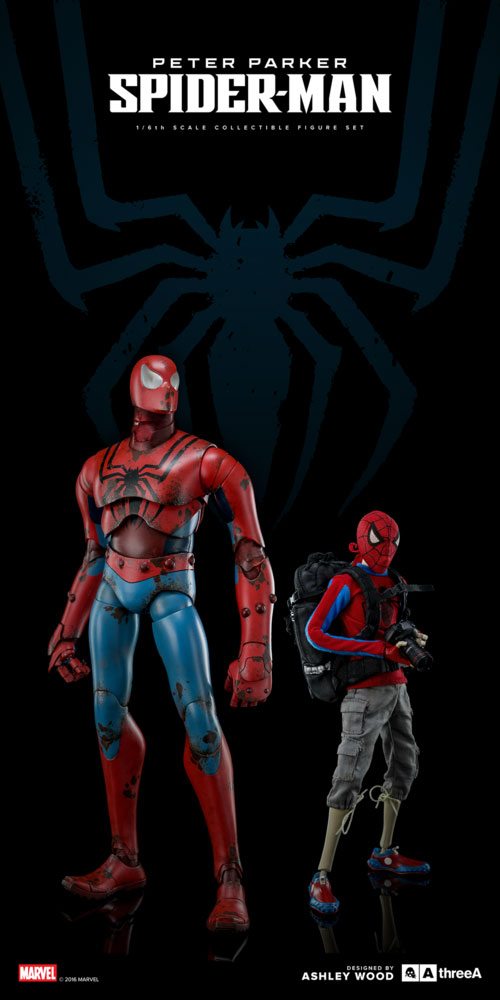 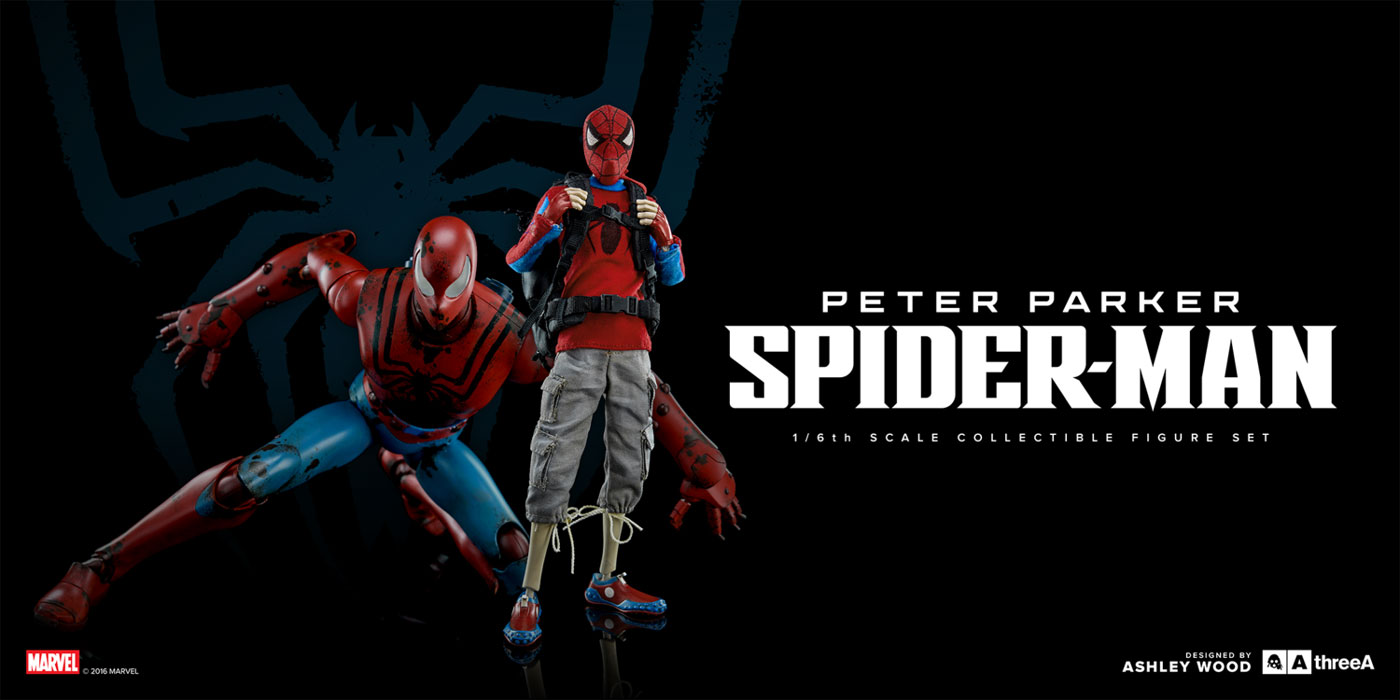 The figure will also come in two versions: a classic red and blue costumed version for general retail, and an exclusive Black Costumed “Stealth” version. 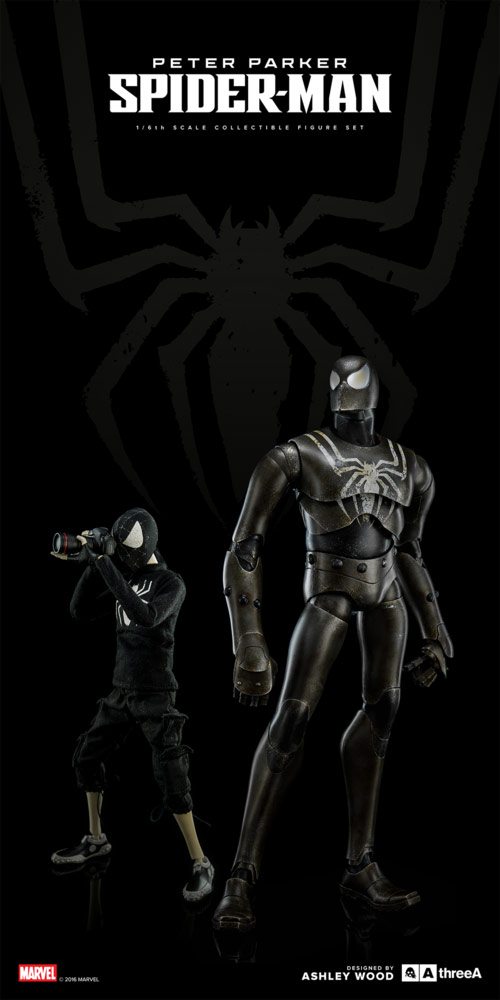 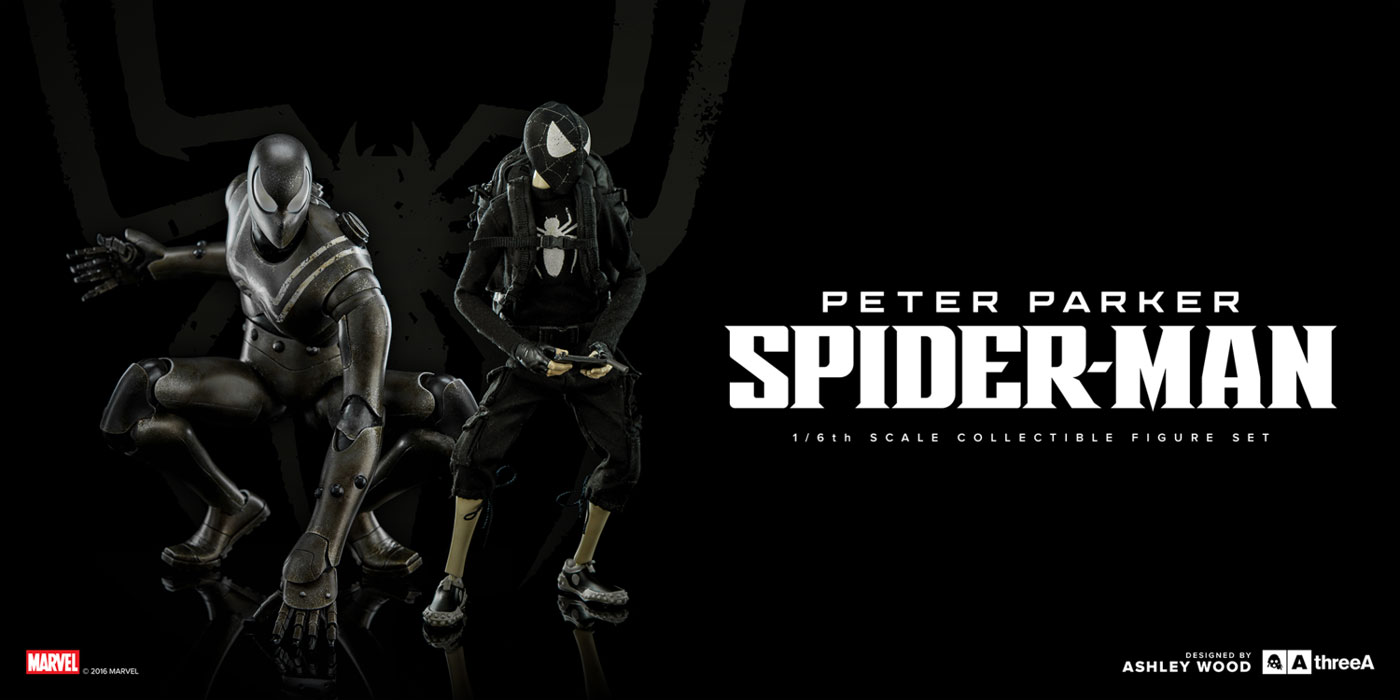 The exclusive “Stealth” version will only be available through ThreeA’s Bambaland webstore, while the classic version will be available at other retailers. The pre-order period starts worldwide on July 29th, so be sure to check back then if you’re interested in pre-ordering a figure. Which, why wouldn’t you be? These ThreeA Peter Parker and Spider-Bot action figures look amazing!