Hey, it’s been a while!  I kind of had a busy month and a half… but I’m back!  Okay, so He-Man’s been back for a while now, dunno if you heard about it.  Lots and lots of He-Man.  Over a hundred He-Mans, in fact.  And they are all EXPENSIVE.  I myself have surprisingly fewer than one might assume, since I cherry pick and my opinions piggyback off what I’ve seen from other people’s collections (If I’m gonna drop $30-$40 on a figure, I had better know it’s good first).  So… in the interests of justice and righteousness and the American Way, let us ask ourselves:  Of the figures that have been released… who’s best?  What’s MY personal Top 10 Masters Of The Universe Classics Figures?

DISCLAIMER:  As I said before, I don’t actually own all of these guys for direct photography.  So rather than a mishmash of stock photos versus my own, I’m pretty much just gonna use stock pictures for everything.  I hope that’s not disappointing!  Anyway, on with the list:

These particular figures really aren’t the BEST in the line, but I’d be remiss not to mention them, because they started everything – He-Man’s parts get used on pretty much everybody, Skeletor’s legs and forearms are the most common bad guy parts ever, Teela provided the template for all women, and Beast-Man gave us our basic “beastly” furry parts.  So, hats off to those guys!  They’re not on the list, but you’ve gotta recognize them!

What’s this, a new character?  Yes, yes it is.  Castle Grayskllman was the winning entry in a “Create a Character” contest for the new Masters of the Universe Classics line, and what a winner he is!  The anthropromorphic spirit of Castle Grayskull fits in with this line so well that it’s hard to remember sometimes that he isn’t one of the original figures!  But seriously, look at this dude – forget that he’s a “new” guy, and look at him.  There are minor issues (like his fangs being blunt), but those fade when you see the whole.  It really became clear to me when I had some housework done, and my Castle Grayskullman got covered in drywall dust… and looked awesome for it!  like he had been locked away in a forgotten basement of the castle, waiting for his chance to wake up…

Controversy time!  Battleground Evil-Lyn tends to get a lot of flak for not really being a 200X Evil-Lyn design, merely using her head from the new cartoon on her old body.  But what they fail to realize is… she’s not yellow.  At all.  In fact, the new head and better coloration work so well with this figure that you almost don’t realize how much of her is reused.  If you want just one Evil-Lyn, go for this lady.  You won’t be disappointed.

Controversy?  Well, no, not really.  Battleground Teela is based on some of her earliest comic artwork, before they had really nailed down what she was supposed to look like.  And… well… she’s hot.  But seriously, this is one of their best female figures.  Barbarian chainmail bikini aside (and why wouldn’t you want to look at it?), this wa a really good effort on a concept piece – I just wish she had a different name and persona, like Vikor or Demo-Man.

One of the biggest hits so far this year was Ram-Man – an oversides specially-priced figure (like Gygor the giant ape, only not quite as huge), Ram-Man presented a unique challenge for Mattel – how were they going to make him and keep a decent price point without shrinking him?  So they delayed until 2013, which probably earned them a lot of subscribers.  Although Ram-Man lacks his old-timey spring feature, he more tham makes up for it with articulated knees!  His helmetless head is also a fantastic addition, and something we didn’t even realize we neded until we saw it.

Trap Jaw fulfills two categories of awesomeness – he’s really the definitive toy of his character, but he’s also provided some of the most-reused parts in the line’s history (his legs).  Trap-Jaw has always been an interesting design – dramatically technological in a fantasy world – and it’s nice to see him return, swappable weapon hands and all.

Yet another new guy fills up this list – as of this writing, Snake Face is the most recent figure, although Octavia should be landing any day now.  Snake Face is just awesome.  Every detail about his sculpt recalls the vintage toy, yet somehow makes it cool.  A big deal to me is how they constructed those red snakes out of flexible rubber, not brittle plastic – many a good toy has been ruined by brittle parts (*cough* Tracker Predator *cough*), and it’s great to see Mattel take a proactive stance for durability.

Kind of similar to Battleground Teela, Vikor is a concept art character, made from Mark Taylor’s origial drawings of he-Man and Skeletor.  Demo-Man, the concept Skeletor, is a figure that I personally like more, but my tastes are weird, and Vikor just rocks.  He IS Conan the Barbarian in every way, comes with a veritable arsenal, and is only inhibited at all by his heavy cloak.  Vikor’s face just seems to hold more detail than the average MOTUC figure, and yet he still fits right in with the rest of the line – but seriously, I can’t get over how this guy is a better Conan toy than any of the actual Conans on the market!

Poor Fisto.  One of the best mergers between vintage and 200X designs, and he was shortpacked!  Sort of – Fisto was under-produced due to a factory error, so not every subscriber got one.  He’s not RARE, he’s just… pricey.  But the important thing about Fisto isn’t his rarity, it’s his amazing, amazing design.  Mattel really succeeded in turning a second-stringer hero into a major toy icon, and Fisto just brims with quality.  A lot of the modern-design stuff wasn’t even necessary – but hey, there’s his extra head.  And his sword.  This normal dude with a deformed hand somehow manages to stand out in a toy line filled with cyborg skunks and vampire pigs, and that’s just amazing.

And since I’m such a nice guy, the final two will have my special photography! 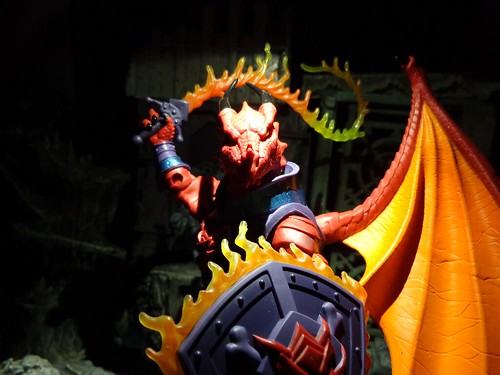 Draego-Man was designed and sculpted entirely by the Four Horsemen, the artist team who has put together all of our MOTUC figures.  Draego-Man was their pet project, and kind of important – after all, an artist’s pet can turn out pretty badly (sorry, Spector), so the effort they put into this guy was very important.

And wow, it shows.  It really does.  You could hate He-Man and still love this toy!  Sure, his designh just barely fits within the MOTUC aesthetic, but it’s insanely forgivable – I can’t believe how awesome he is!  Of course, due to budgetary troubles they had to drop most of his weapons… only to rerelease them in a weapons pack, and they are pretty easy to find.  So with that in mind, Draego-Man is pretty much one of the best toys of last year, to say nothing about how he ranks within MOTUC. 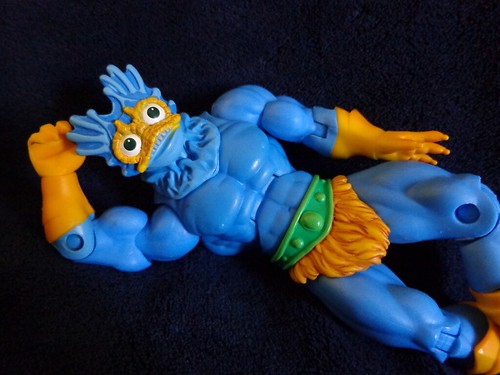 This is what happens when I can’t find an official product picture.

And there we go.  In my opinion, the absolute best Masters of the Universe Classics figure is one of the earlier ones.  I know I’m not alone in this (just check out the He-Man.org forums), but even though Mer-Man is mostly cobbled together with re-used parts (everything but his head, really), he’s perfect in his simplicity, his two heads recall the toy, the box art, the 200X design, and even the vintage cartoon (Toys R Us repaint only).  His accessories are perfect, his color scheme is really great (both regular and the repaint), and he’s just my favorite.  EVerything came together really well for Mer-Man, transforming him into one of the first super-fast sellouts for the line.  He got reprinted, and has shown up in other sales and compensation packages, so his price is even pretty good, another plus.

Well, there you go.  My opinion states that those ten are the best, and as we know, I am always right!  Well no, maybe not, but this list seems roughly in line with the series itself.  Hopefully the rest of 2013 will add a few more contendors to this list – I’m looking at you, Mantenna!