Mudtrooper gets a figure in the 6″ Black Series Line!

It looks that Hasbro is continuing to release figures from Solo: A Star Wars Story in the Black Series line well into next year.

At SDCC last month they showed off the actual figures for Vas and L3-37 and revealed Rio Durant, Cronos, and the Range Patrol Trooper. Last week at Unboxing Toy Con Mexico they revealed Han Solo in Mimban Gear which is essentially Han Solo in Mudtrooper armor.

As you can see the action figure consists of Han Solo’s head from the Han Solo figure which was released earlier in the line and the Mudtrooper armor and helmet which we’ve seen in the film. To me, the armor looks like an Imperial Officer outfit with armor pieces on top which is a really unique look. I love the long tattered cape and the unique blaster rifle as well. The helmet is in two pieces with the respiratory mask and the helmet with the goggles over top.

What’s great about this figure as you can put the respiratory mask on Solo and pull the goggles down from the helmet to make a completely anonymous Mudtrooper, which is great for army building. I’m not entirely sure if they’ll release a standard Mudtrooper as they really don’t need to.

I really enjoyed seeing Solo and I loved the WW1 feel to the Mimban scenes. The Mudtrooper armor really pushed that emphasis as well with it’s dark muted colors, cape and helmet. Overall I really love the space western vibe to Solo and I love that Hasbro is releasing as many figures as they can from the film as there are some truly awesome designs in the film. All the figures that they have released so far in the line have been fantastic especially with the face printing tech that they have been using on the human characters.

We’ve got all of Beckett’s crew from the film and all the main characters aside the main antagonist which I wouldn’t be surprised gets released next year too. There are only a few small gaps now in the line with characters in different outfits and a few more prominent characters.

At this moment in time, it’s completely uncertain when this figure will be released next year. 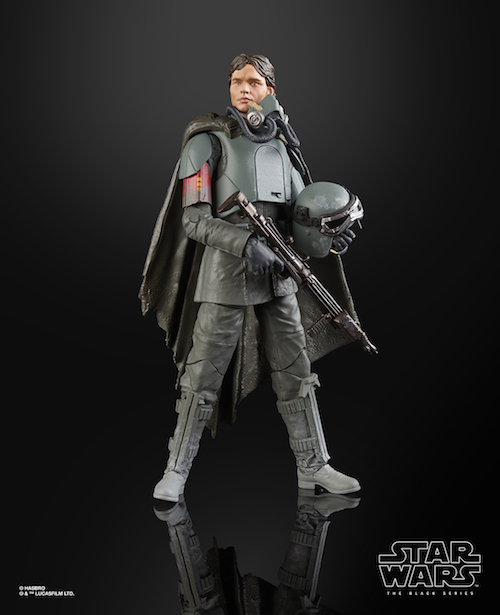