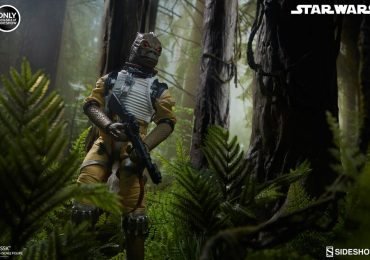 While it is never bad to see new renditions of Darth Vader and Stormtroopers, we’re always happy to see some of less known characters getting some of the love as well. Which is just one reason we’re excited for Sideshow Collectibles’ latest sixth scale Star Wars Bossk action figure. Bossk is a Trandoshan bounty hunter from the Star Wars universe, and although he might not be that famous to casual Star Wars fans (he had what, about 30 – 40 seconds of screen time in Empire Strikes Back), he is well-known to extended universe aficionados. The figure will not be 100% new, since it is an update of a 2012 figure, but it will feature a brand new head designed to be movie accurate.

He will be 12 inches (sixth scale) tall and fully articulated, wearing a specially tailored pressure suit with a flak vest and a support rig. When it comes to accessories and interchangeable parts, the figure comes with 2 sets of hands, one being the neutral hands, one left hand for supporting his rifle and one right hand for shooting. He will also include a Relby V-10 micro grenade launcher. As mentioned before, Sideshow has made a newly sculpted head, which does looks better than the old one, even though the old one wasn’t bad. The figure also includes a base for display. 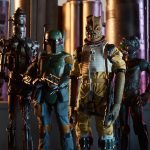 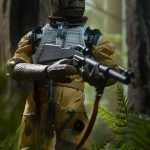 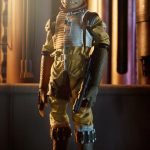 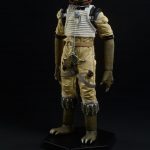 Sideshow’s Star Wars Bossk action figure is currently up for pre-order on their web store. The price is $210, and the figure has an estimated release date of sometime between June and August 2017. It’s a great looking figure, and if you have their Boba Fett, 4-LOM, and IG-88 figures, it’s almost a necessity just to complete the set. Also, keep in mind that Bossk is being limited to 2000 pieces. There is no information about any future bounty hunter figures, but let’s hope Sideshow has some in the works (please give us Black Krrsantan, Sideshow!)