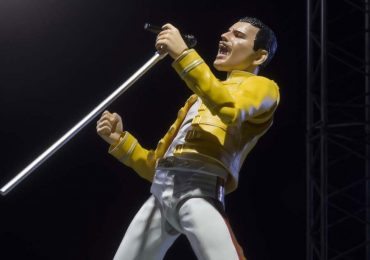 We might not know what the first thing is that pops into your mind when someone mentions the words “action figure,” but we can safely assume that it’s probably not a rock ‘n’ roll legend. Bandai’s S.H. Figuarts wishes to change that by creating a Freddie Mercury action figure, arguably one of rock music’s greatest vocalists.

The figure will stand just over 5 inches tall (about 12 cm) and will feature full articulation. This will enable you to completely recreate Queen’s famous 1986 concert from Wembley Stadium. Freddy will be wearing his yellow jacket with a white shirt and pants which he wore at the aforementioned concert. Each of his facial expressions was made using digital facial printing technology so as to recreate as many details as possible, including his iconic moustache. The figure features numerous interchangeable parts such as 6 swappable hands (for holding the microphone, relaxed hands, etc.) and 3 swappable heads. Also included are his microphone and a half-type microphone stand. The packaging is also great for collectors in that it enables them to both display it boxed in mint condition, and safely remove it without damaging the box and the figure. 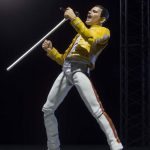 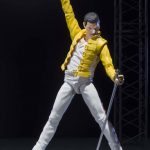 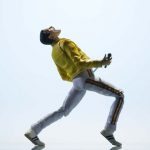 The S.H. FiguArts Freddie Mercury action figure is currently out in Japan, and is up for pre-order in the States and in Europe, with an estimated release and shipment date being sometime in May 2016 with a price of $55.99.

Freddie Mercury might not be a superhero, but definitely was a hero to millions of people worldwide, which is why his action figure is well deserved and would look great in any collection. If you have a vivid imagination, you can even pair him up with other Bandai’s figures such as Goku, Teenage Mutant Ninja Turtles, and Bruce Lee, creating some of the most interesting fights in the history of your collection.