This is a great set, with awesome attention to detail in the sculpt, and nice paint. Sadly, the vinyl stickers not really sticking take one of the set's best features, the light up computer, and nullify it. It is, however, recommended for all Bat-Fans.

Note: We were given this BtAS Batcave Set to review for the site. Our opinion is our own and does not reflect the opinion of the maker, or DC Comics in any way. This set was provided to us by the great crew over at DC Collectibles.

All in all, the Batman the Animated Series Batcave Set is really great, with one big problem.

I was very, very excited to get into this Batman the Animated Series Batcave set. Just the Batcave is enough to get me excited, but throw in Alfred, and I go catatonic. I grew up watching Batman the Animated Series, and that is partially why Mark Hamill will always be my Joker (well, that and he is AMAZING!) For similar reasons, Efrem Zimbalist Jr. will always be my Alfred. I prefer the Alfred that was a great butler, and not the ex-military, super butler of today. Finally getting a BtAS figure of Alfred is awesome. The packaging is pretty straightforward for this series. The top is a simple title and the right side is the Animated Series logo. The left side shows some photos of the of the set and the Alfred action figure set up in different ways. The front shows the whole set put together with the name of the set on the right corner. The bottom of the package is blank.

Packaging gets 3 out of 5 stars.

Alfred’s paint is fairly simple. The majority of the figure is black and white but I am still going to give it big points for the face paint. There is only one spot where I found some spilling and it is hard to notice. It is where his hair meets his face. His eyes have no spillage and I love the small line they painted for his mouth.

The Batcave’s paint, while simple, is very solid. There is only one place I saw spilling and that’s on the keyboard for the computer. It is small and not easy to see so it’s not a big deal. I am a big fan of the simple sculpt they did on this figure. The suit has tails and you can feel that the buttons on his shirt and suit are sculpted along with his bowtie. I really feel like they nailed the mark on his face sculpt. The studiously bored look on his face is perfect! The eyebrows are placed high and are a little sharp and he has a great jaw. He looks just like he did on the show.

The sculpt on the Batcave is pretty fantastic! The computer looks awesome! Probably the best part is that it lights up. On the back, the wires for the lights just add to the look. The dashboard has a little phone on it which shall be referred to as the Bat-phone from now on. You can tell it’s an old series cause the Bat-phone is wired. It also comes from the computer. I do not have Batman’s figure yet but I hope you can fit the phone in his hands. The base of the set is sculpted at the bottom to look like rocks which is fantastic. I also love the stairs off to the side. They really made sure to make enough space to really set up some awesome poses.

Alfred’s articulation is what you would expect. His head rotates 360 degrees with a solid amount of swivel. He can tilt his head up a good amount but he cannot tilt down at all. His shoulders rotate 360 degrees and can move out to be level with his shoulders. His elbows rotate, you guessed it, 360 degrees and they can bend inward to a 90-degree angle. His wrist can rotate 360 degrees and bend 90 both forward and back. He does not have any torso/hip rotation and his legs don’t have any rotation either which was pretty disappointing. His legs and move out to be almost level with his hip and his knees can bend almost 90 degrees. Hos feet can rotate 360 degrees but that’s it. You can technically tilt them a little but the joint is not really meant to so they pop out super easy if you tilt them more than a little.

Articulation gets 3 out of 5 stars. 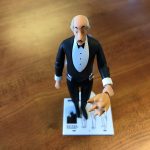 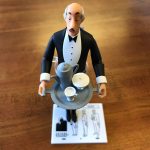 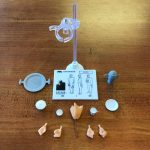 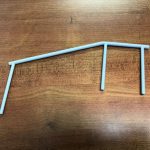 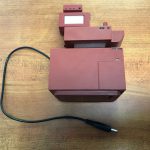 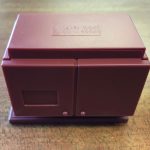 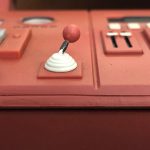 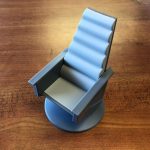 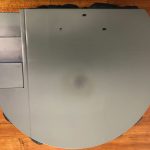 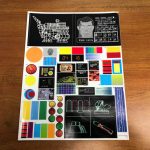 Alfred’s accessories are simple but pretty good. He comes with three pairs of hands, a stand, a feather duster, a silver tray, a teacup and plate, a mug, a sugar bowl, and a large … teapot? Water container thingy. The first pair of hands are simply open. The second are closed fists, and the third are for holding his accessories. My only issue is that the hands for holding do a terrible job. He can’t hold the feather duster by the handle. You have to let it sit with the feathers against his hand which looks odd. The tray does fit in his hands but not well. When you stack the pot and cups on it, it tends to lean back. This is Alfred we are talking about. He is a pro and would hold that tray like a boss! His stand is pretty great. This is the first figure from this set I got that has a spring. It holds him up very well. The pot, cups, sugar bowl, and tray are all pretty good. They all have simple paint and the sculpts are solid.

The Batcave has the bat-chair (I assume that’s what he calls it.), The backdrop, and the vinyl “stickers” for the computer. The chair looks pretty close to the one in the show. It also can rotate on its base though I don’t really know why you would. Maybe if you were doing a dramatic chair reveal. The backdrop is pretty awesome! The paint is fantastic and they cut it so the top looks like the edge of rocks!

OK. Now the problem. The stickers are the single worst part of the entire set. They don’t work because they are not stickers. They are vinyl. They are supposed to stick via static electricity or something like that. The point is, they don’t work. The idea was to provide collectors with more options, so the “stickers” are interchangeable. And they do give you a bunch of options which is a great idea but it’s just executed poorly. The vinyl doesn’t stick to the computer screen surfaces. You have to get a sponge or some soaked paper towels and wet the computer down before you put them on. That will last you several hours but they will fall off and roll up. It basically takes the coolest part of the whole set and ruins it. We’ve reached out to the DC Collectibles team to ask if we are missing something and if there’s a better way to attach the decals. They did respond saying that the would ask the team but we have not heard back yet. If anyone here knows how to make this work, PLEASE tell me in the comments. Or, if they do get back to us with a better/the proper way to do, we will gladly update the article.

Accessories get 2 out of 5 stars. 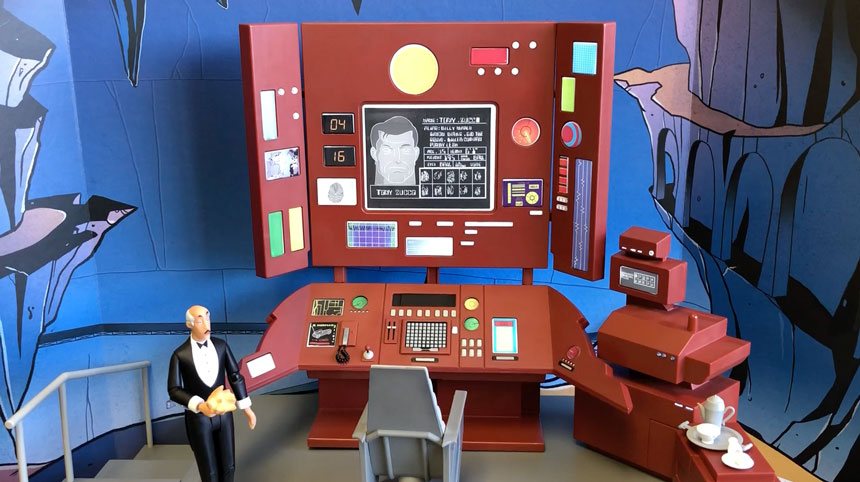 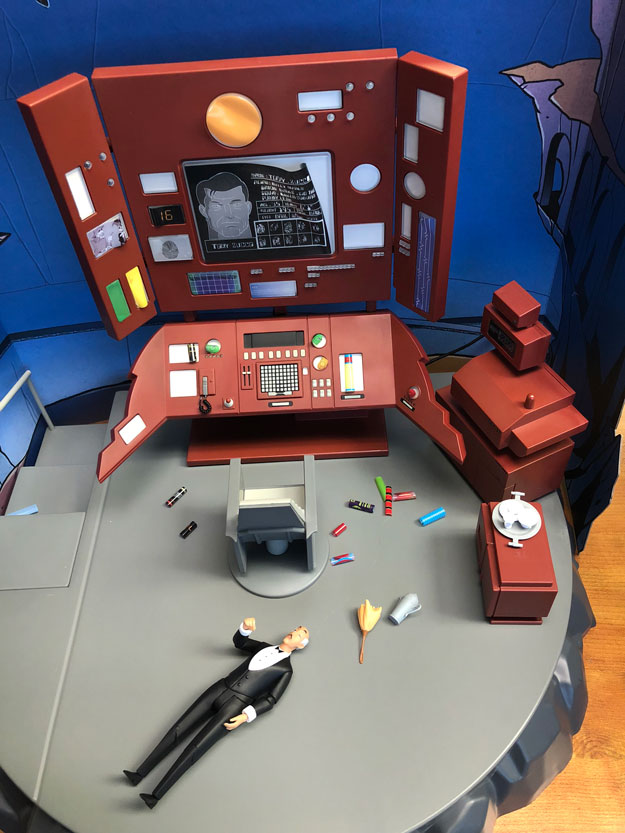 The Batman the Animated Series Batcave set overall is pretty cool. The paint and sculpt were spot on for the most part but the accessories were a letdown. I find myself unable to give it anything over 3 stars even though there are things about this set that are better than that. Between Alfred not being able to hold his accessories correctly and the “stickers” failing so horribly, I just can’t give it more than 3 stars. Maybe my expectations were set too high. Maybe I’m letting vinyl stickers get to me. All the same, I am giving it 3 stars out of 5 overall. I still believe its a set worth getting and a must have if you are collecting the series. Just remember that you are probably going to need some glue for the “Stickers” or just put it up without them.

You can pick up the BtAS Batcave Set over at the always amazing Entertainment Earth, or from the fine folks at Amazon.