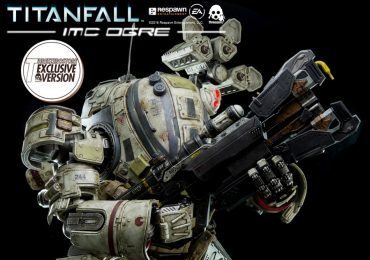 ThreeZero has just announced that manufacturing of its Titanfall IMC Ogre figure, including a pilot, has just begun. At the same time, they’ve also provided numerous new photos and information about the figure.

The Ogre will be 20 inches tall, while the pilot will be 6 inches tall, which means that you can put the pilot inside through the fully openable hatch. If you combine this fact with the even more amazing one that the figure has over 100 points of articulation, you might just realize that this may be one of the coolest collectibles we’ve seen. The articulation is so rich that all the fingers are fully articulate. Even the tri-missile launcher is articulate, and can be opened with the missiles being removable. All of these parts also boast a superb paint job. There is also a light up feature that requires 2 AAA batteries, which are not included, though you can choose whether the lights will be red or blue. Every package also includes a 40MM Cannon with detachable ammo drum. If you decide to purchase it directly from ThreeZero, you will get a small but a significant bonus – an exclusive ARC Cannon. 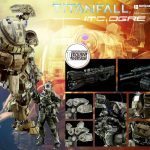 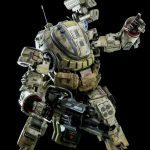 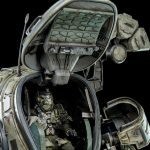 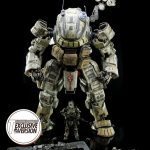 As mentioned, the figure is currently up for pre-order on ThreeZero’s store as well as Entertainment Earth and Sideshow Collectibles, though the price might dissuade many fans from purchasing. The current price is set at $420 – $450, which is nothing to sneeze at.  However, in this case, it definitely feels worth it, considering that you get a fully articulate, superbly painted, half a meter tall mech with a pilot inside, all sculpted and crafted to absolute perfection. The estimated release date for this amazing collectible is the 4th quarter of 2016, so you still have time to start saving money, or just pre-order it now and go back to playing Titanfall and waiting for it to arrive.