Public Enemy Action Figures Are Here to Fight the Power

Presspop Toys revealed something awesome at the recent SDCC 2016, and that was a brand new set of Public Enemy action figures. The iconic hip-hop group from the 1980s remains one of the most influential groups in the history of the genre, and they were recently inducted into the Rock ‘n Roll Hall of Fame.  And now, Presspop’s awesome figures are not only available to order but they’ll hopefully be shipping by the end of the month. So if you need some help to Fight the Power, don’t miss out on this set.

This action figure set features four of the central members of Public Enemy from the 1980s: Chuck D, Flavor Flav, Professor Griff, and Terminator X. The figures will vary in height, with Terminator X being the largest at 4.92 inches (12.5 cm), followed by Chuck D at 4.13 inches (10.5 cm), Flavor Flav at 4.05 inches (10.3 cm) and Professor Griff at 3.74 inches (9.5 cm). Each of the figures will feature basic articulation, in the next, shoulders, hips, elbows and knees, and be made from PVC and ABS plastic. The figures will come in an illustrated window box, perfect for putting them on display.

Both the figures and the packaging were designed by Ed Piskor, the author of the New York Times bestselling and Eisner Award-winning comic series Hip Hop Family Tree.

The Public Enemy action figures are currently available through the Presspop website, as well as through Entertainment Earth’s website for $60. Also, if you order the set through Presspop, they offer a bonus sticker set with four stickers that feature the group members as they appear on the packaging. According to Presspop, the sets should arrive in their warehouse in mid to late August, at which point they will immediately begin shipping orders to customers. 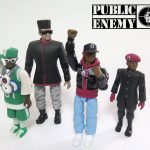 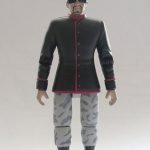 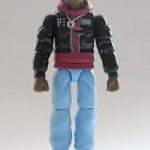 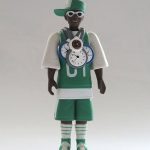 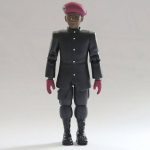 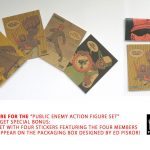