Up, Up, Down, Down, Left, Right, Left, Right, B, A, Start. If you recognize this sequence, you are a child of the original NES era of gaming in general and amazing side-scroll shoot-em-up Contra in particular. If you don’t, it’s the code that gave you 30 extra lives in Conta, a code I definitely never used because I could TOTALLY beat the game without using codes. Well, what better way to remember the early days of console gaming than with NECA’s awesome Classic Contra action figures, which are now available and shipping.

As is only proper, NECA is releasing the figures in a two-pack. After all, where would Contra Bill (the blonde one) be without Contra Lance (the dark haired one)? Dead, that’s where! The figures both stand approximately 7 inches (17.8 cm) tall, and will feature all-new head sculpts and a “pixelated” paint design. The figures appear to feature basic articulation, though NECA has officially said how much. Accessories wise, the figures come with custom designed weapons based on the look from the game, detachable blast effects for the weapon, and the infamous power-up pod from the game, with a clear display stand for the pod that gives it that “floating” effect from the game.

NECA also came through in the packaging department, presenting the figures in a window box packaging that recreates the look of the classic Contra game cartridge.

If you’re looking to snag a set of NECA Classic Contra action figures, you’ve got a few different options. You can get them from NECA’s official eBay store

and over at NECA’s Amazon store for $43.99, or you can snag them on Entertainment Earth for $39.99. NECA continues doing awesome work, especially with their classic video game inspired figures. Probably a long shot, but I’d love some Ikari Warriors figures. (Also a very hard game. Come to think of it, most NES games were.) And if that’s not enough awesome, check out these sweet photos from NECA, showing off the figures in action. 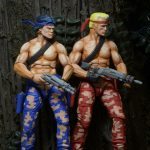 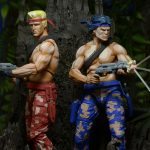 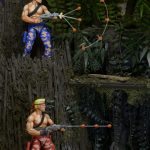 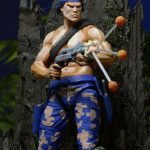 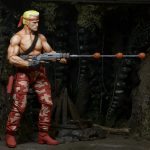 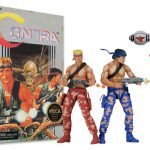