I absolutely loved this figure, and I’m glad that someone has finally decided that the fans deserve action figures for the game. The paint, sculpt, and articulation were all spot on for this figure and I loved the included accessories.

To search eBay for this figure:

I have been eagerly awaiting the Team Fortress 2 action figures from NECA for quite some time now and they are finally here and more impressive than ever. I have both of the figures but we are going to be starting things off with the NECA Team Fortress 2 Pyro Figure. If you didn’t jump on the pre-order for the Demoman and Pyro then it might be too late since most retailers are sold out already. Atomic Toy Store still has a few of each left, I’m sure they will be gone in the next few days though.

I used to play Team Fortress and Team Fortress 2 when I was going through school. I absolutely loved that game along with Counter Strike. I was so excited to hear that NECA was going to be making TF2 action figures. They have been a long time coming. What a better company to take on the task than NECA? They did an amazing job on them too. Join me for a look at the PYRO.

The packaging the Pyro comes in is pretty standard that you can expect to see come out on NECA’s office, a clamshell package. Some people hate it and some people love it. I tend to like it until that rare time I slice my finger on the sharp plastic. It didn’t happen today, but it almost did, that’s why I mention it.

On the front of the clamshell, you get the Team Fortress 2 logo from the game and the Pyro displayed nicely in the window. The figure’s name goes along the bottom and there is also some small text at the bottom reading “Ages 17+ Up” to go along with the mature game rating Team Fortress 2 has. You also may have noticed that there is a big sticker on the front alerting you that there is a bonus code inside to unlock some exclusive content. I’m not sure what the content is yet, but you do get a code to unlock something in-game. 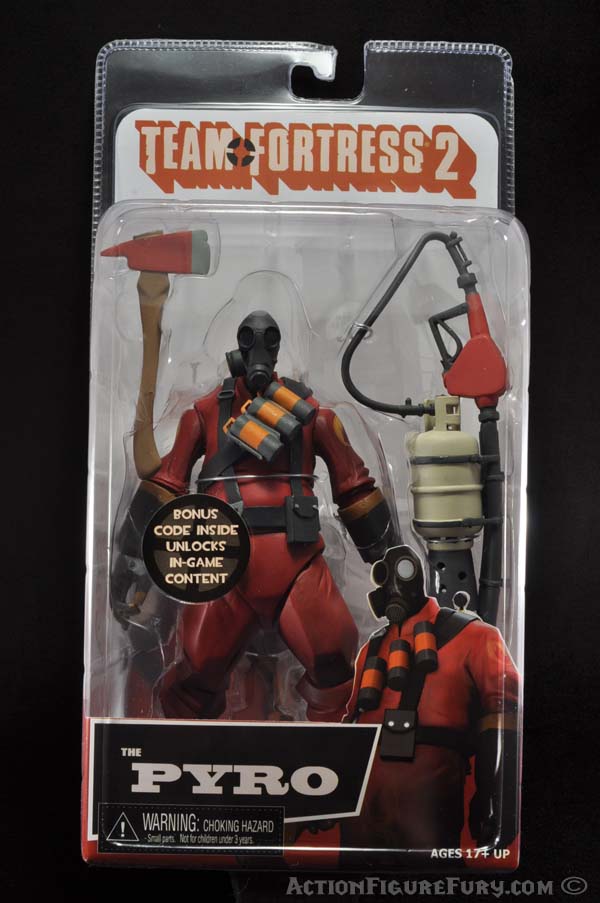 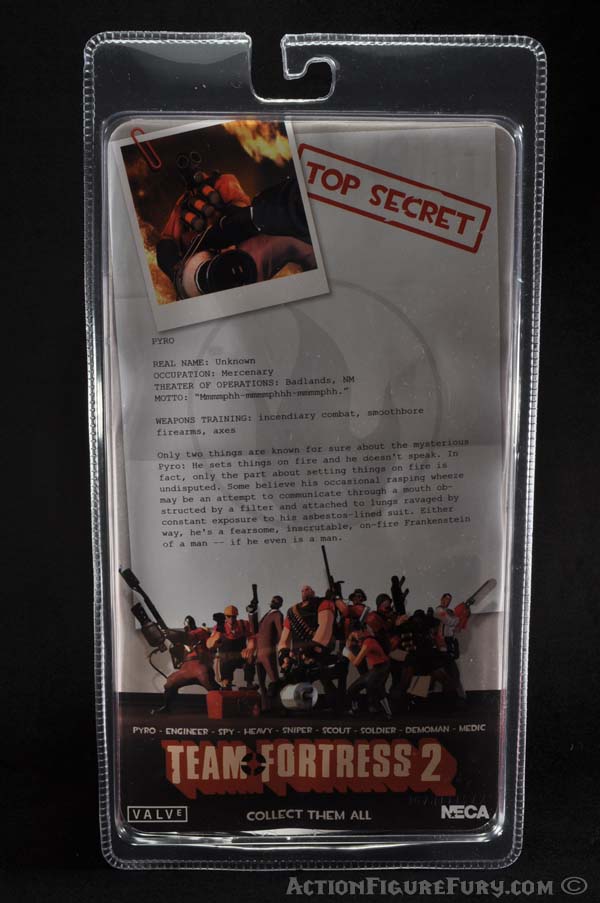 The back of the packaging is meant to represent a Top Secret file containing everyone you would want to know about the Pyro. Click on the image of the bio to learn more about him. I love the fact that the paper the file is on contains the pyro’s logo.

Along the bottom are the rest of the characters from the Team Fortress 2 RED line-up. Hopefully we hear more about the release dates soon. I’m really anxious to complete my teams and have and epic battle on my desk. 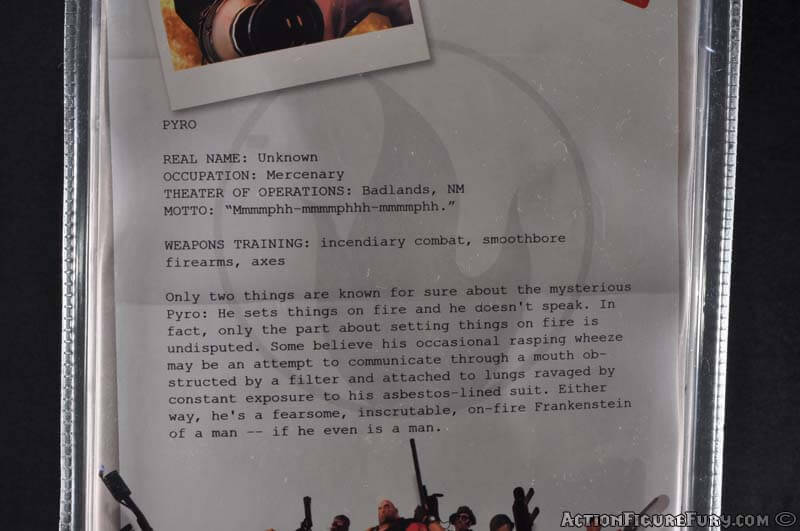 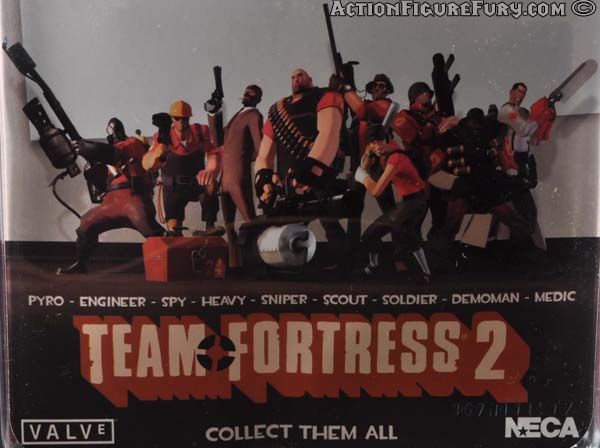 The quality of the figure is amazing. His sculpt looks exactly like he looks in the game. His RED suit was sculpted so that it has a baggy appearance, I assume like any pyro suit would have. The straps on his chest are actually sculpted separately from his body but you can’t remove them.

His hands were sculpted so that he can only hold his flame thrower on the one specific side as pictured (He can hold it on the other side but it doesn’t look right at all because of the design).

The Pyro comes with his 2 signature accessories… His flamethrower and his axe. NECA made the flame thrower out of some rubbery yet solid plastic which is a very good balance between the two. This allows for the tubes to be bendable but the flame thrower as a whole to be a solid accessory. Nicely done.

As for the axe, the Pyro can hold it best on either end of it (where the handle is fat) the best. 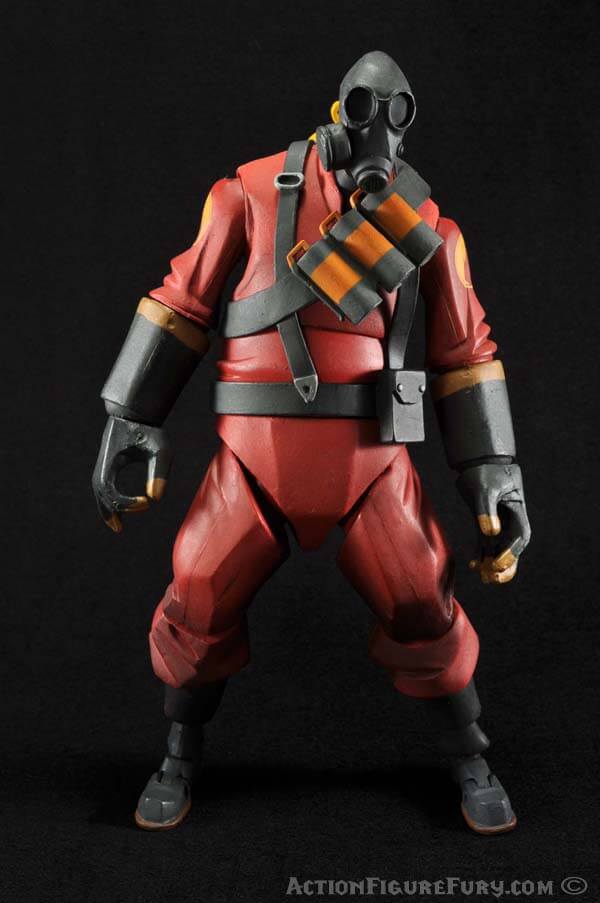 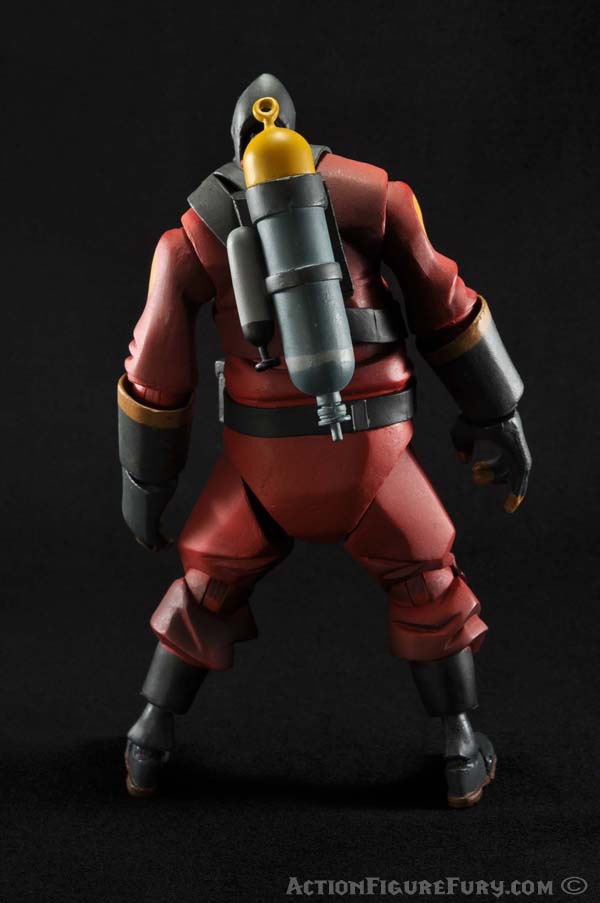 With the paint on a NECA figure I usually expect a few slip ups here and there but not with this guy. This guy is flawless. The colors are all spot on with the game and the lines are pretty straight.

One cool thing that he does have is on his knees is a black spray. It’s like he burned himself from his flame thrower. A nice little touch. 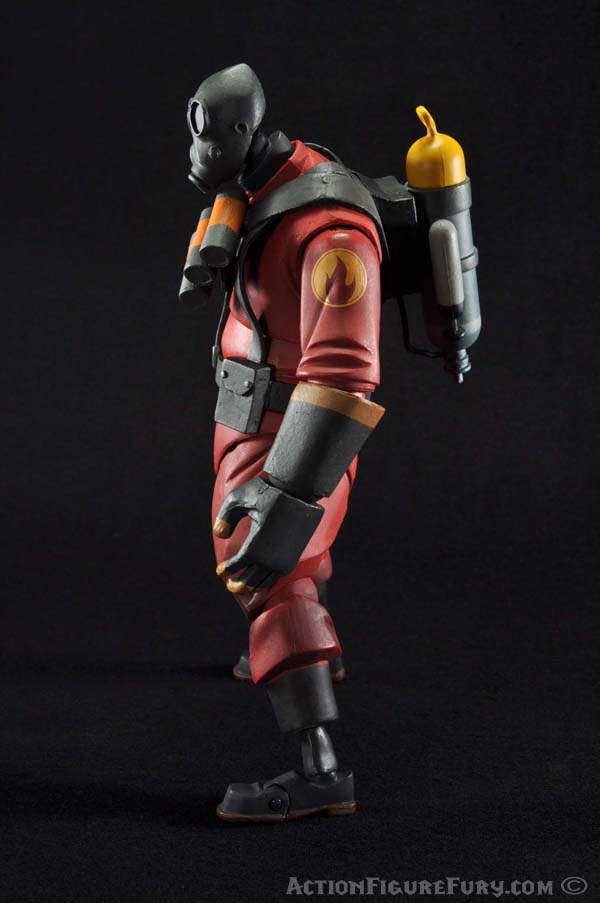 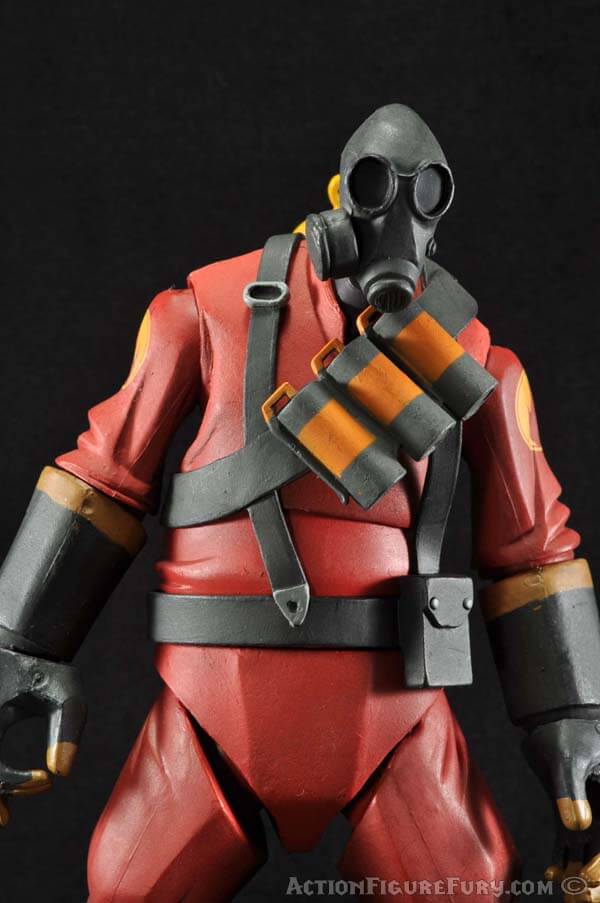 Now this guy isn’t some super deluxe articulated figure that was imported from Japan or anything like that, but he’s got his bases covered. I don’t think you would have very good articulation if you put on a big Pyro suit either. Though he has very good neck/head movement thanks to a ball joint neck with a disk hinge. He can look up and down with ease though his head doesn’t exactly turn over his shoulder. It pretty much just spins like a clock.

He has unrestricted swivel/hinge shoulders, which are function with ease. His elbows are swivel/hinge joints and will bend about 45 degrees, due to the sculpt on the gloves. Then he just has some basic swivel wrists.

He has a floating torso joint (I almost missed it) with a little bit of movement and a swivel waist.

His hips are swivel joints, though the look like they are meant to be something more and I just can’t get the joint loose. I don’t want to snap his leg off either. At any note the swivel joint works just fine and you can get him in action poses pretty well. Then he has swivel/hinge knees that will bend about 45 degrees, which is plenty. He has a swivel at the top of the boot and then a swivel/hinge right at the top of the ankle. His boots are cut in half… I love cut boots.

Even though he did have a few joint restrictions it really wasn’t a big deal. He can still get in all of his iconic Pyro poses with ease, which is really all that matters. You aren’t going to be making him do backflips and cartwheels – or are you?

One thing I would like to point out is that his ankles are a little bit thin and if you are working under hot lights (like I was for taking pictures), the soft plastic NECA used gets even softer and you will have some problems getting him to stand up. I had to pop him into the freezer a few times! 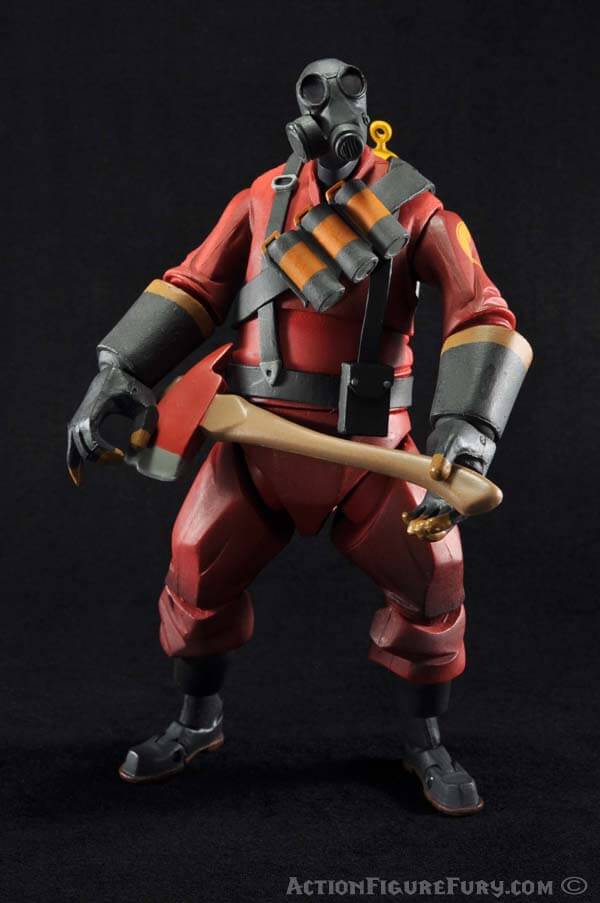 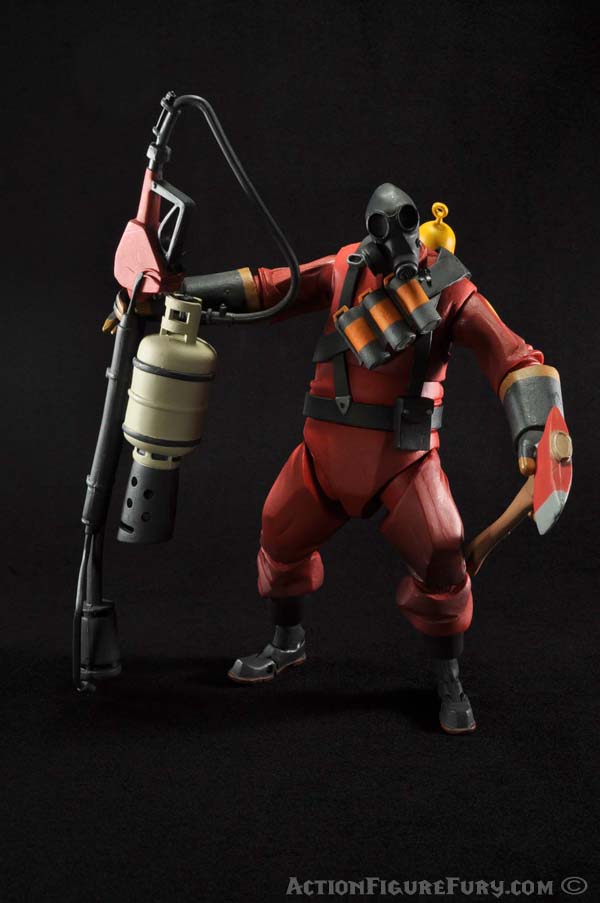 I absolutely loved this figure and I love Team Fortress 2. I’m glad that someone has finally decided that the fans deserve action figures for the game. The paint, sculpt, and articulation was all spot on for this figure. If you can still get your hands on one of these LIMITED EDITION figures then I suggest that you do. Heck, collect the whole series.

UPDATE: eBay is your best bet for finding this figure.

If you are interested in finding one of these action figures, click this link to: search eBay for this NECA Team Fortress 2 Pyro action figure. 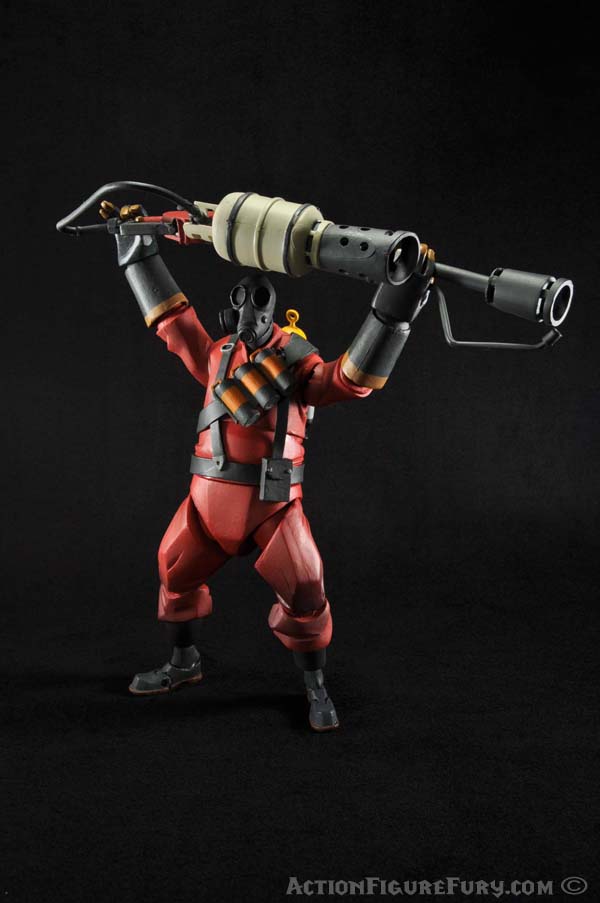 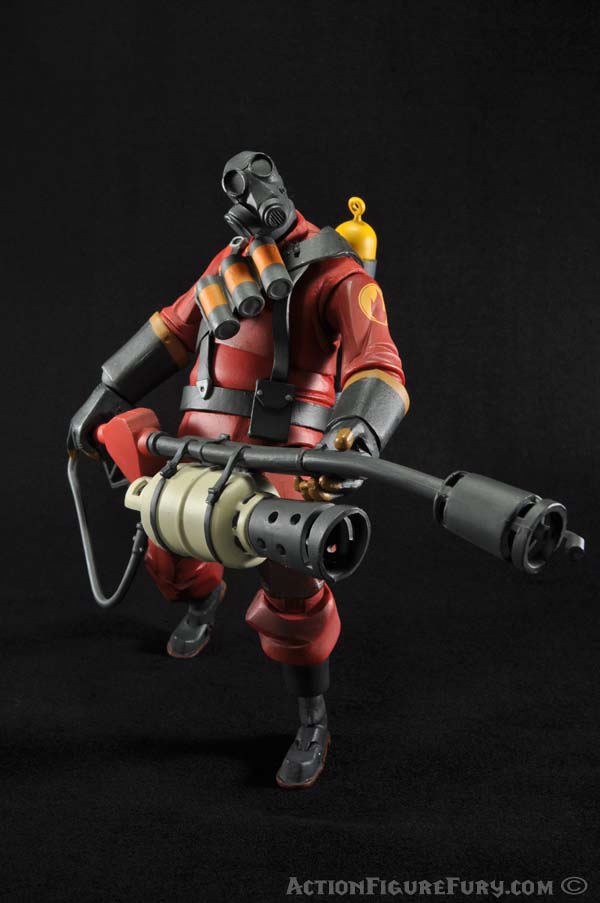 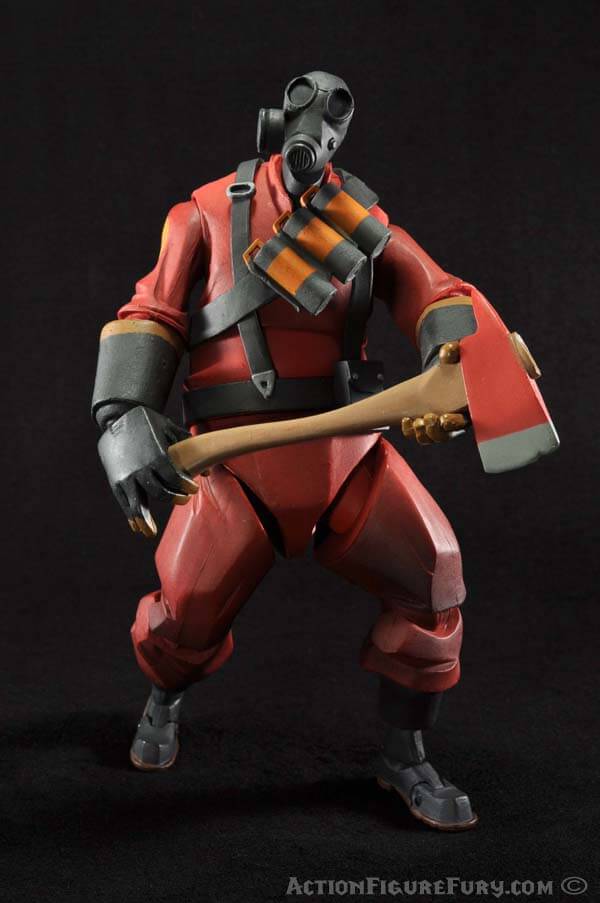 Do you have a question or comment about the NECA Team Fortress 2 Pyro Figure Review? Leave a comment below!