A couple that slays together, stays together. NECA’s terrific  Child’s Play line continues.

Earlier this year NECA released their Ultimate Chucky Figure which covered some entries in the Childs Play series. At SDCC last month NECA Revealed they are releasing a Bride of Chucky Ultimate two pack. I currently haven’t seen any of the films aside from the first one.

This set is specifically set on Bride of Chucky which is the fourth film in the series. In the set, you get Chucky and Tiffany with a wide array of accessories.

The Chucky in this set is quite different from the Ultimate Chucky which came out earlier this year. Chucky has a more stitched and patched up look. With tears and holes in his overalls and the striped top and dirt covering his clothes.

His head appears that it has been stitched & stapled together. If you look closely you can actually the staples and stitch marks in his head. The fractures and scars look great too. The facial expression on all three heads looks fantastic. With a smiling, laughing and an angry evil head.

Tiffany comes in her bridal dress which has a lot of sculpted detail in the sleeves and bodice, the skirt is a fabric skirt to not hinder her articulation. She has a necklace sculpted around her neck with her tattoo to her beloved.  Like Chucky, Tiffany comes with three heads as well including the doll head, a smiling face, and an evil smile.

I have to say the facial expressions really add personality to the figures which are great. The accessories include interchangeable arms for Tiffany so she can wear her leather jacket. Which is a really nice added touch.

The set comes with two shovels, two pistols, an ax, two knives, a bottle of champagne, turkey baster & beaker and the amulet of Dembela.  I’m sure they’ll also come with interchangeable hands and maybe some additional accessories when we get closer to the release date.

I haven’t seen Bride of Chucky, which is the fourth entry in the ongoing series. Though I have to say this set is another must have. The figures are well articulated and beautifully sculpted and come with plenty of accessories. Even though I already have the Ultimate Chucky this set is still a must-have for me.

The set is expected to be released in December this year. 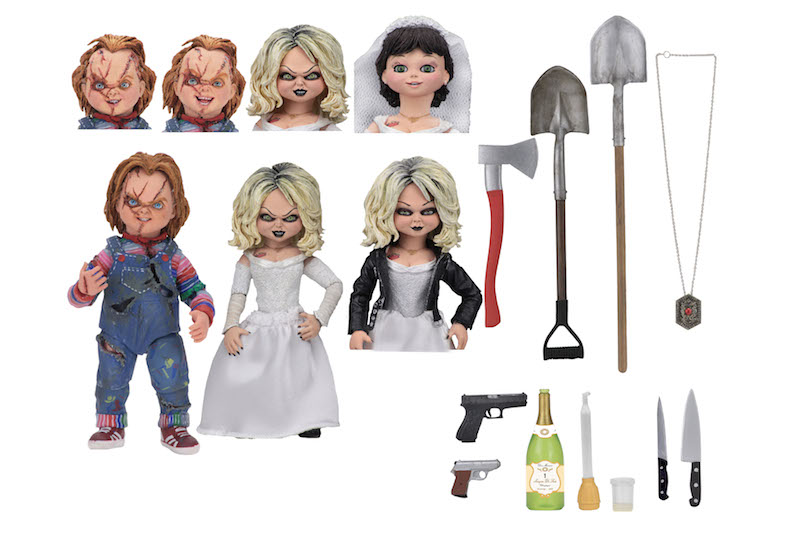