To Order This Figure on Amazon:

NECA did a great job with the Assassin’s Creed license – making figures of Altair and Ezio from Assassin’s Creed to Ezio’s final outing in Assassin’s Creed Revelations. And to date, Ezio is the only protagonist who has lasted more than one game. The figures improved as the series went on but alas they lost the license to McFarlane Toys, who are doing a pretty good job with license despite the scale differences. It would have been nice if NECA still had the license, though.

Unfortunately, I have lost the images of the packaging though I remember it very well; it was a clamshell packaging and it had the Unhooded Ebony Ezio clearly displayed inside with his accessories. At the bottom, it listed his accessories and articulation. On top it had the Assassin’s Creed logo and on the back there was an image of Ezio from the video game with a short description of Ezio in the game along with some of the other Brotherhood figures that you could get. It was hard to open as it was clamshell packaging. 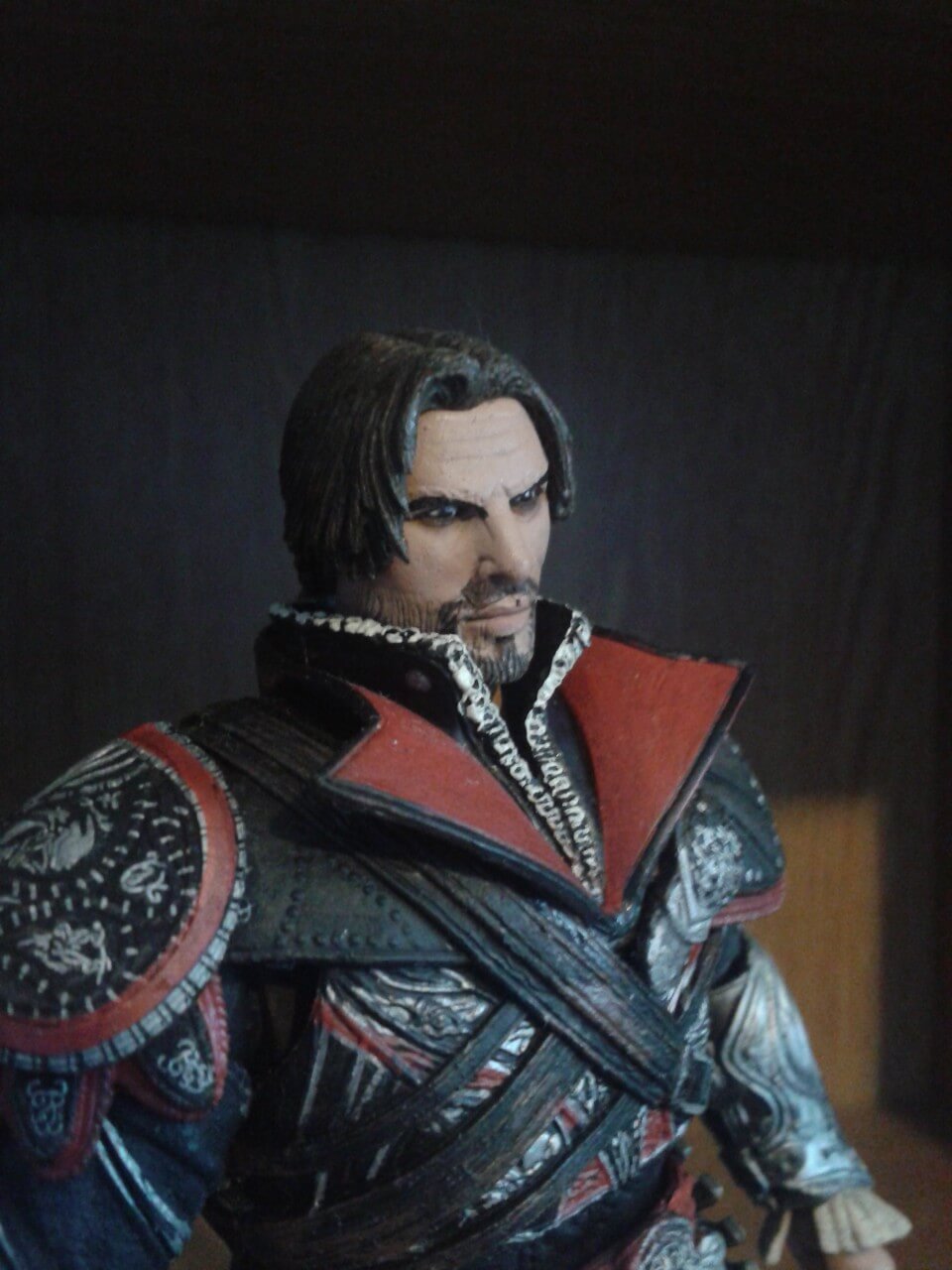 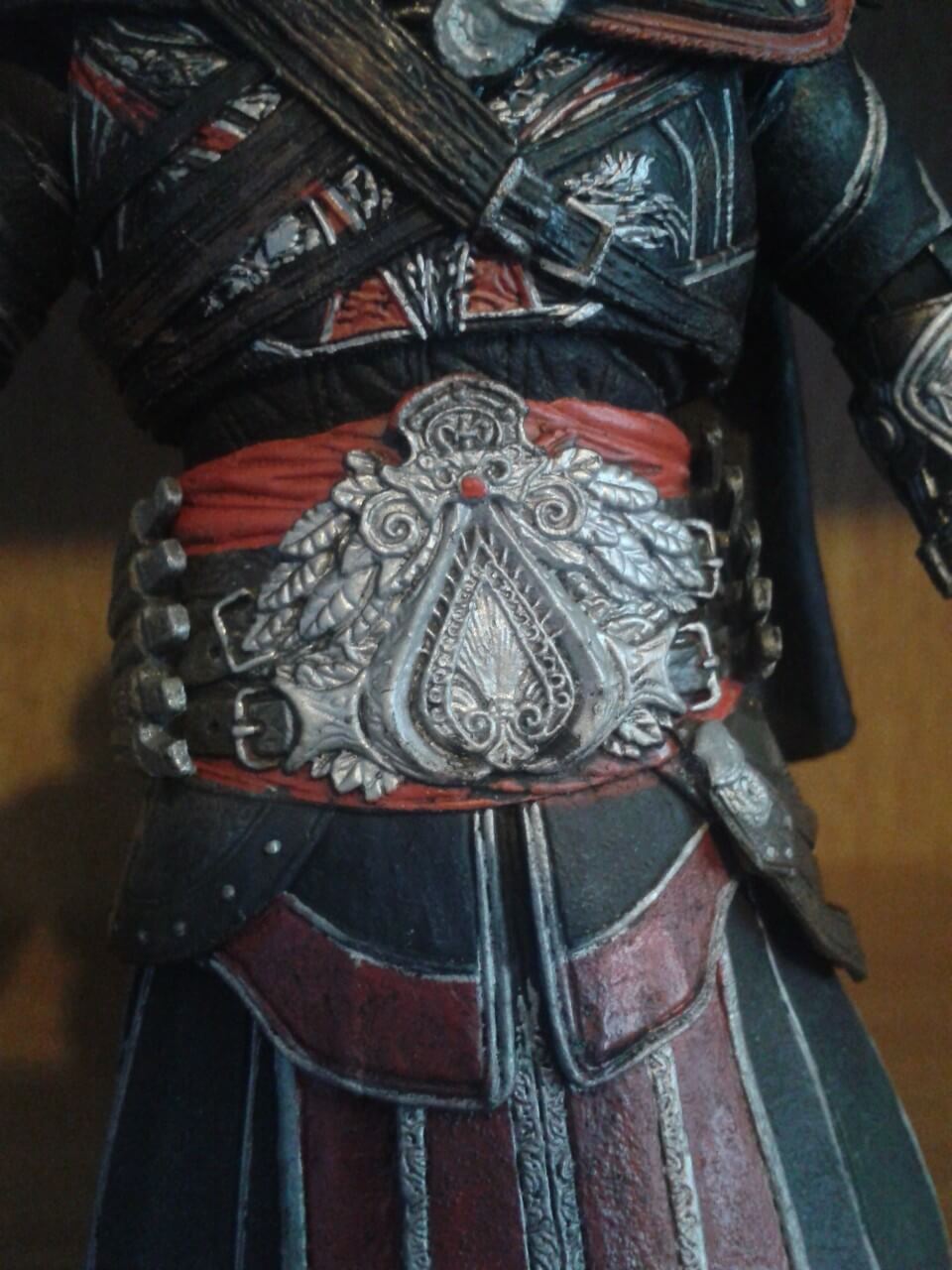 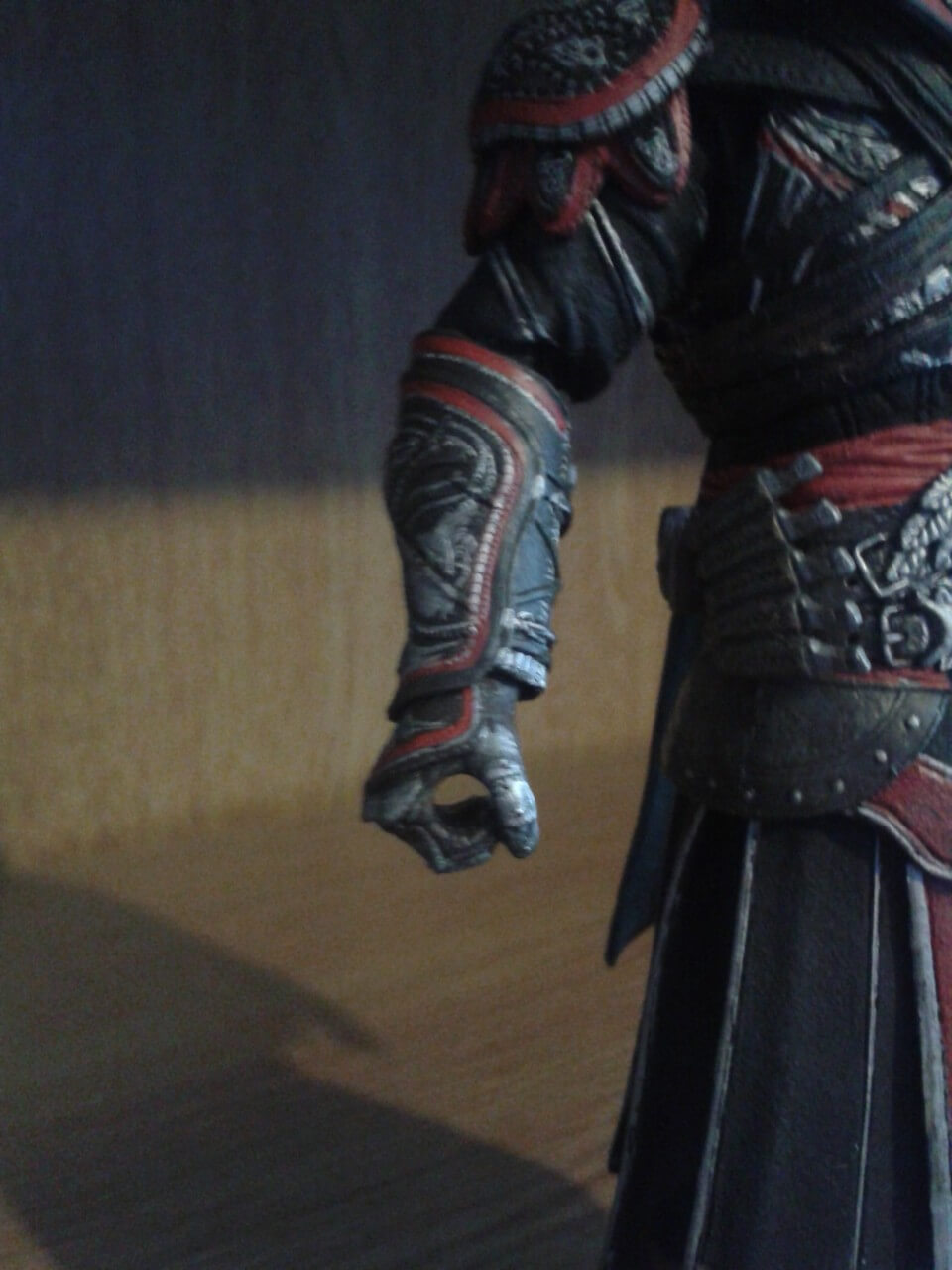 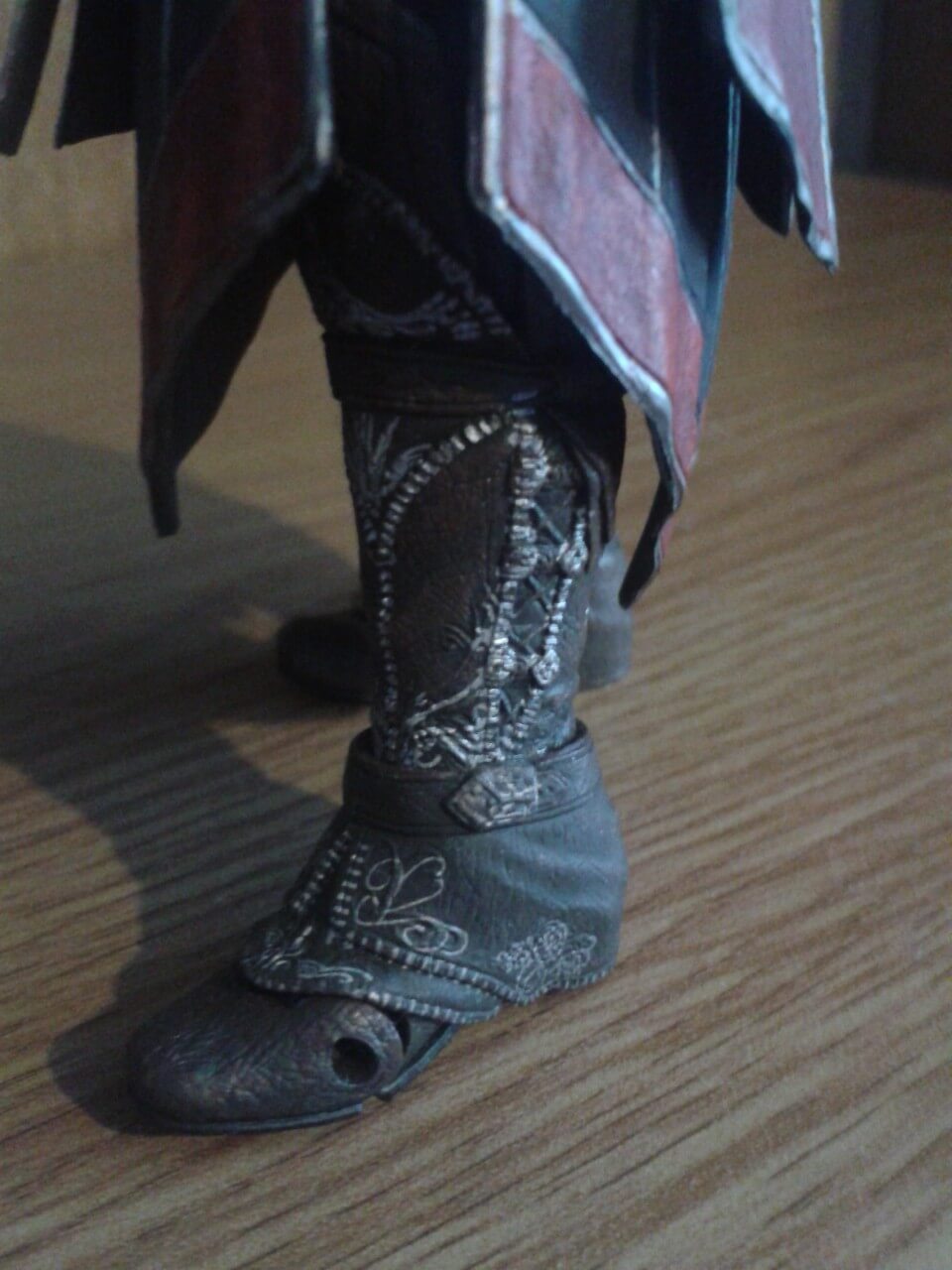 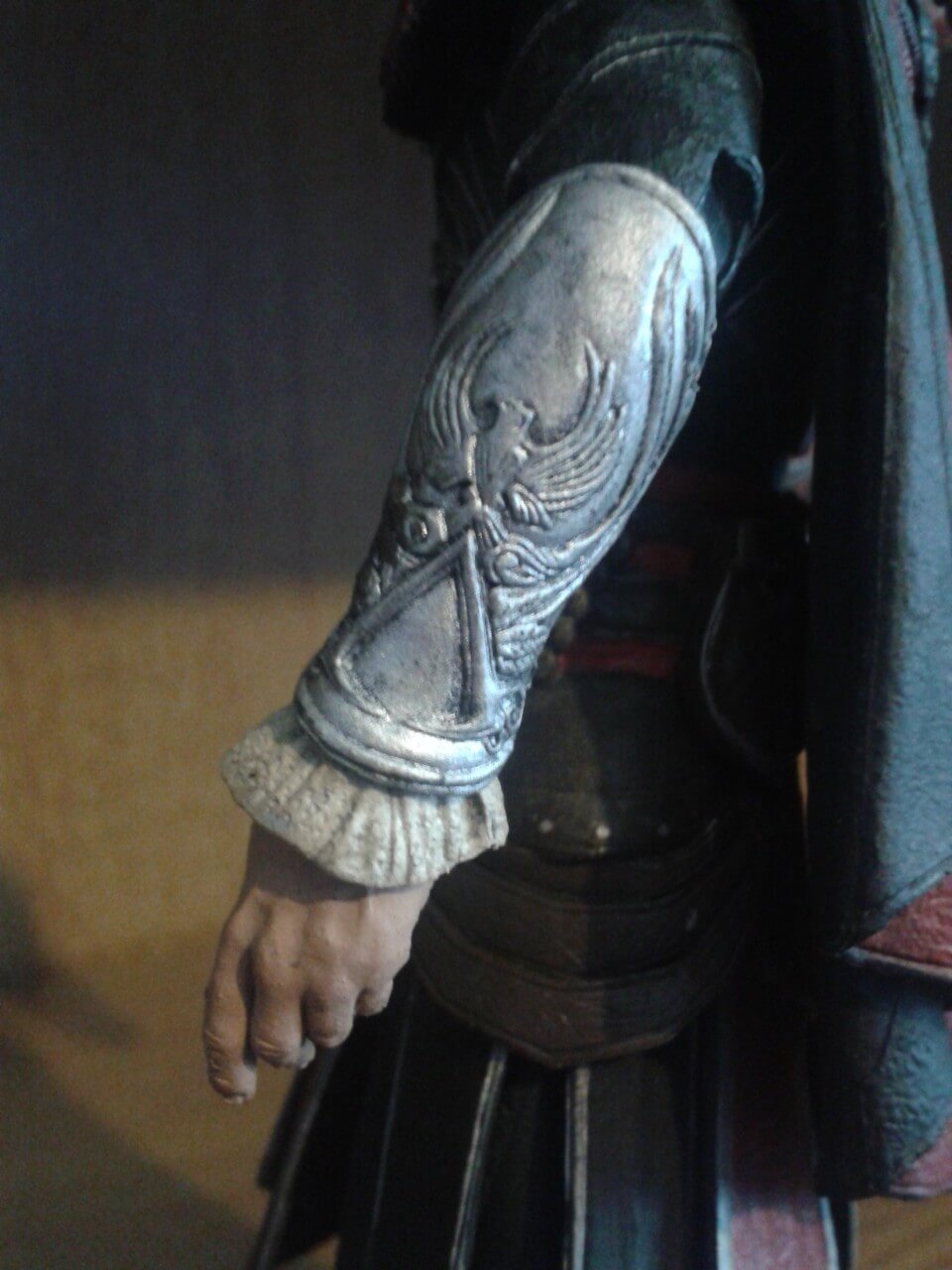 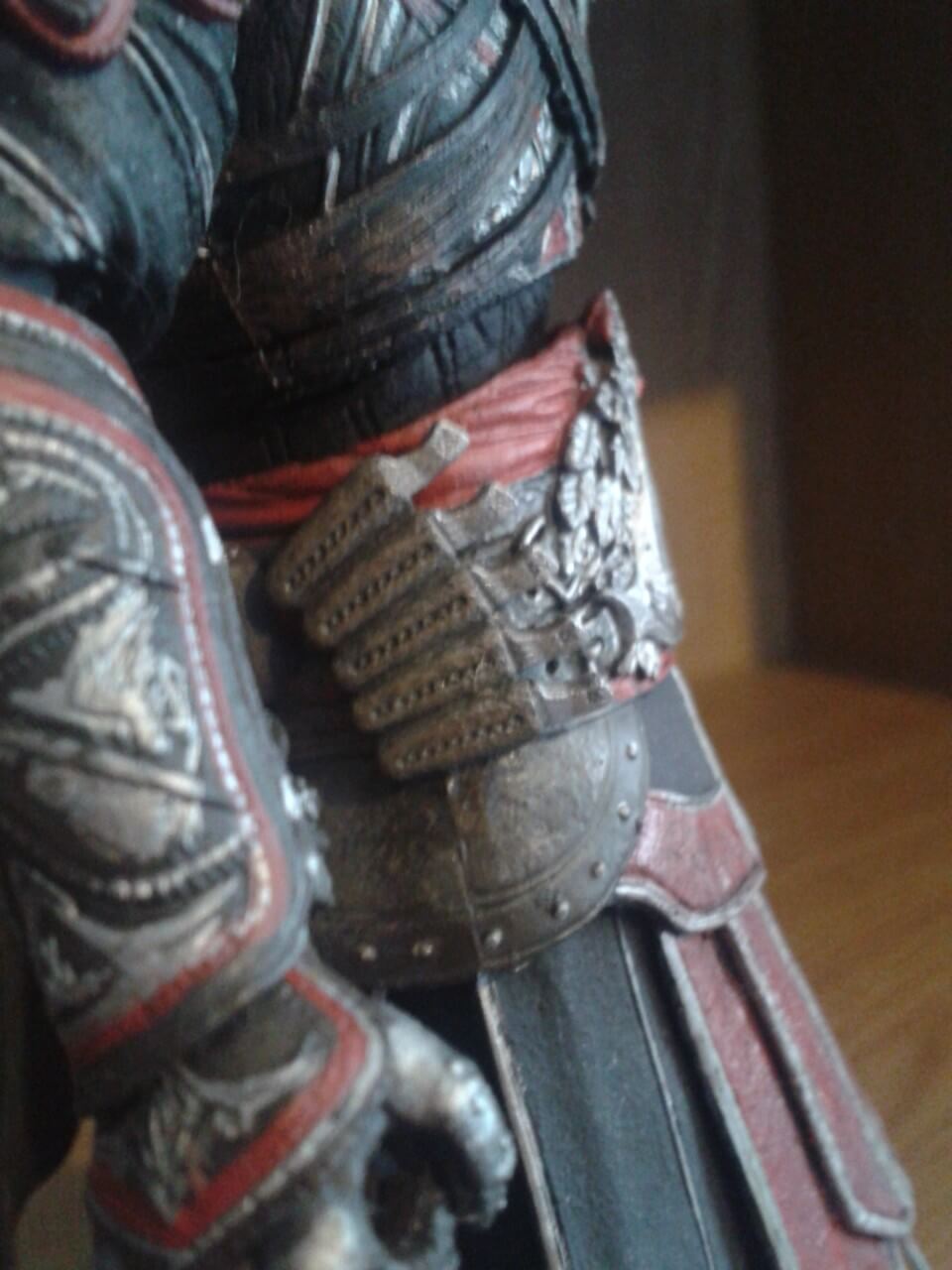 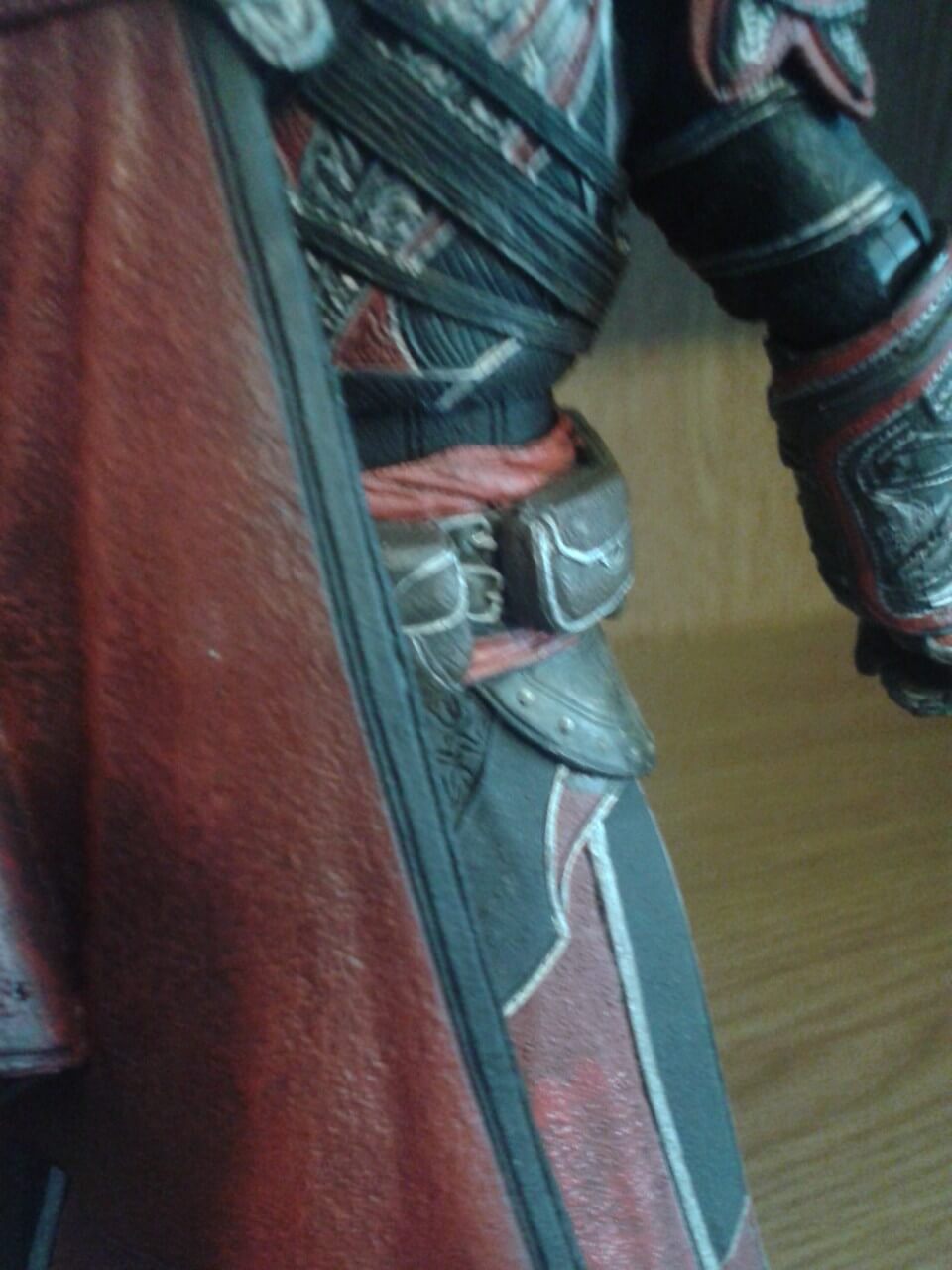 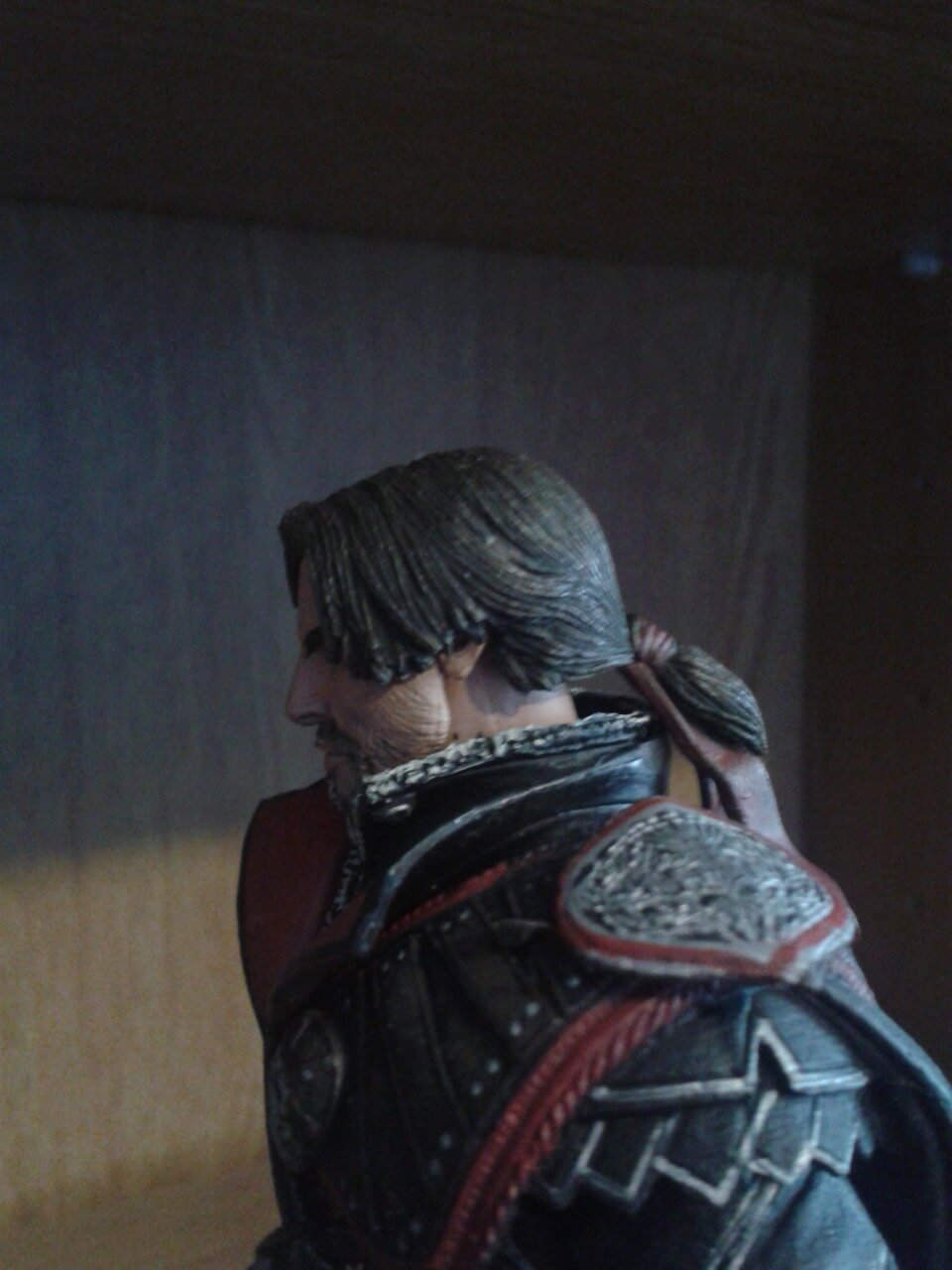 It goes without saying this is a fantastic figure the amount of detail is absolutely insane for a 7″ figure! The intricate fine detail that is on Ezio’s clothes in the game are perfectly recreated here, from his shoulder armor to his boots – it’s all there. You can clearly see all the layers in the clothing where parts overlap and it’s very well done indeed. The fabric and armor parts intertwine exceedingly well. It’s hard to tell where one part begins and ends with some pieces.

Forgive me I don’t know much about the clothing of this period.  He seems to be wearing some basic pants and shirt with a long decorative coat over the top with a chest plate, shoulder armor pieces, gauntlets from Assassins Creed 2, a thick red sash, a large belt with sheathed throwing knives, his signature shoulder cape and boots. There’s a great mix of leather and armor in his outfit. I love the various straps, rivets and the intricate detailing on his chest with the collar of his shirt peering out the top.

The belt is beautiful and you can see the Creed logo clearly implemented into and the knife handles and sheaths are very well detailed. I love how you can hang his sword on his hip like in the game with the soft plastic on the belt. There are three pouches on his belt, which are hidden on the back of the belt.  I love the gauntlets on his arms they are very well detailed and I remember them from Assassin’s Creed Two; I have not played Brotherhood yet. There’s a lot of detail in them and the hand sculpt is amazing.

The lower part of the coat and cape looks fantastic and are very well detailed with folds sculpted into the cape. The boots are my favorite; they look superb I love the intricate fine detail sculpted into them. NECA has not missed a trick on this figure.

The head sculpt looks brilliant to sat the least they have captured Ezio’s likeness very well in the figure. He’s a bit older than he was in Two and it does show, though his hairstyle is the same. I love the serious and stern expression on his face; they put a lot of detail into it especially the eyes, which look amazing. His facial hair looks fantastic and there’s a natural sculpt to the hair and the ribbon in his ponytail is a great touch.

The detail on his gauntlets where his blades pop out is fantastic and very well done. This figure is full of incredible detail.

I’m very pleased to say that the paint job is stunning with only two very small errors that being on his metal Assassin gauntlet with some paint missing and a part of one of his buckles, which is not easy to see. Other than that defect, it’s flawless. The colors that are mostly  used are different shades of red, brown, black and silver on his costume and they work very well together . I really love the different shades of red. The shirt collar is painted white and the sleeve poking out of the gauntlet is a cream color and is a great touch.

There’s no paint out-of-place on his accessories either, which I’ll go into later. Overall the sculpt and paint on this figure is incredible and flawless; I love it. 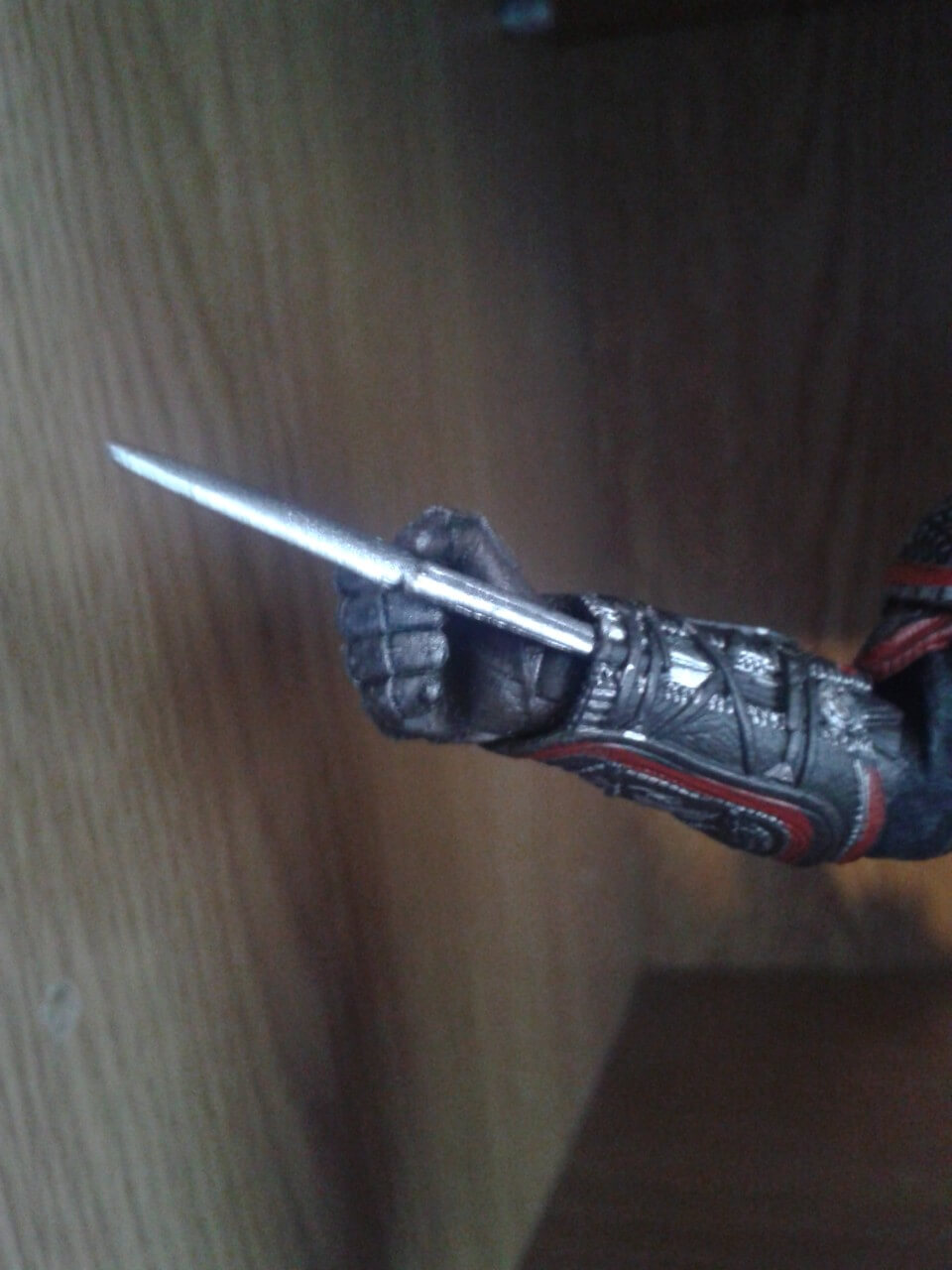 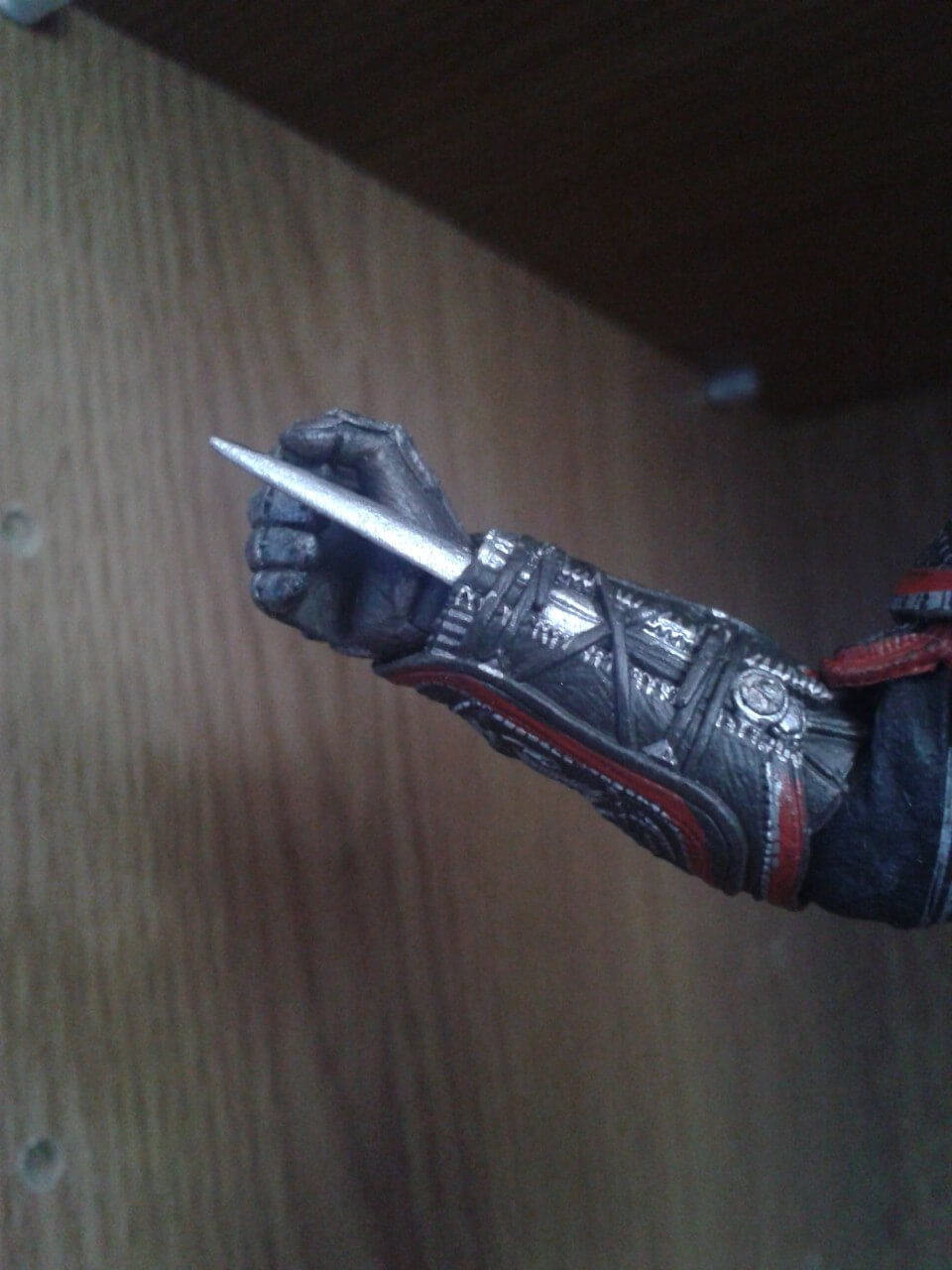 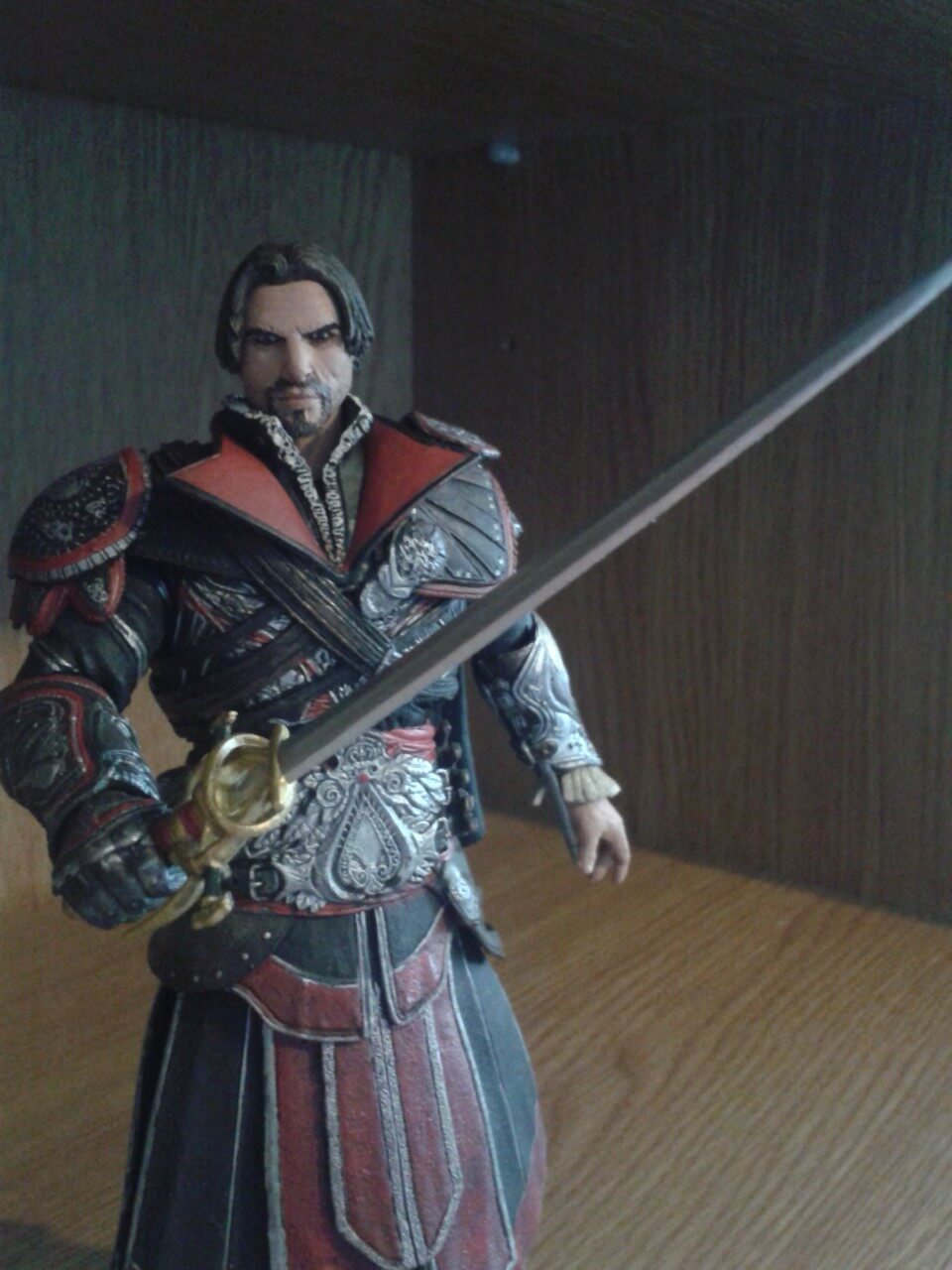 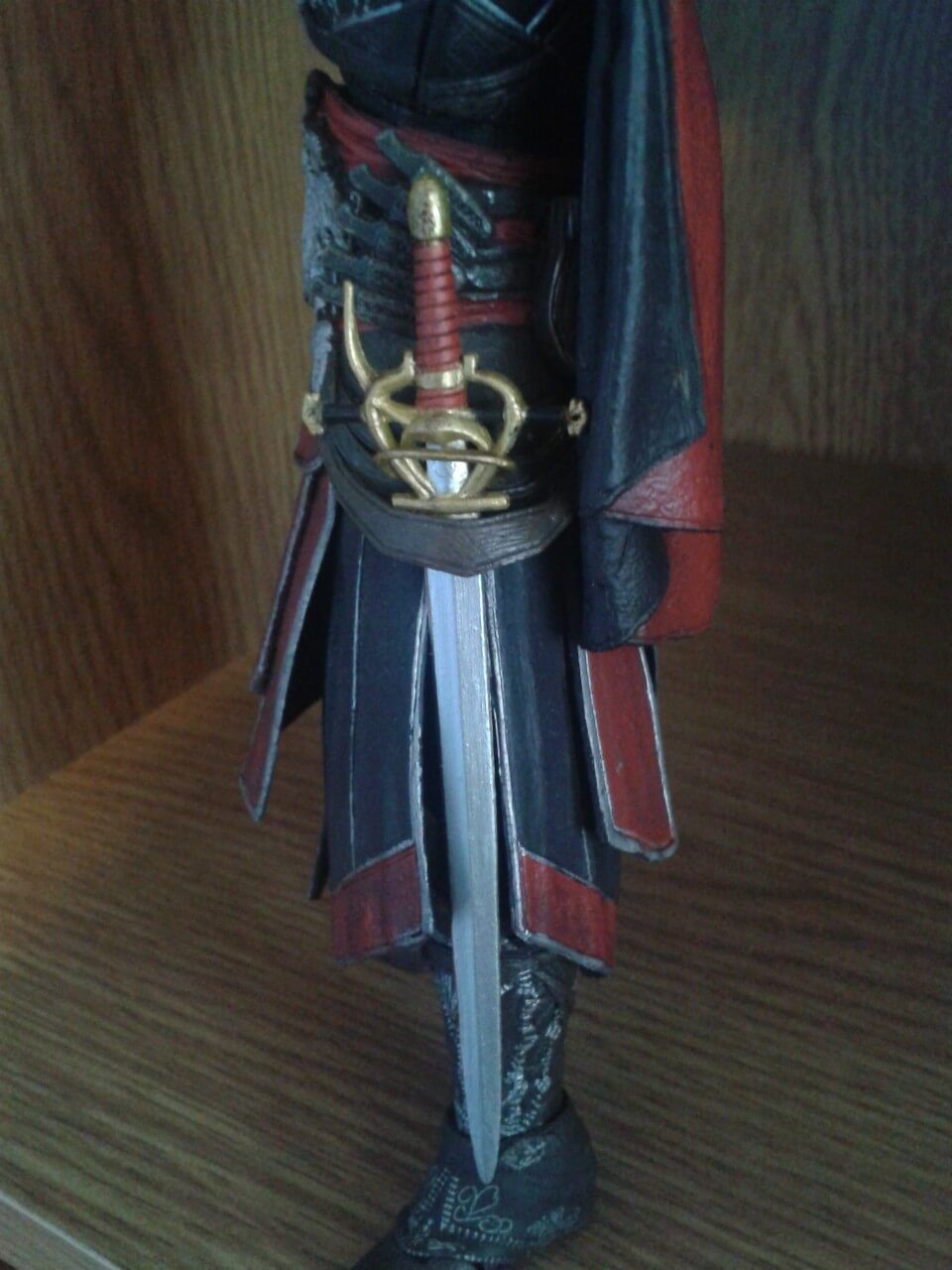 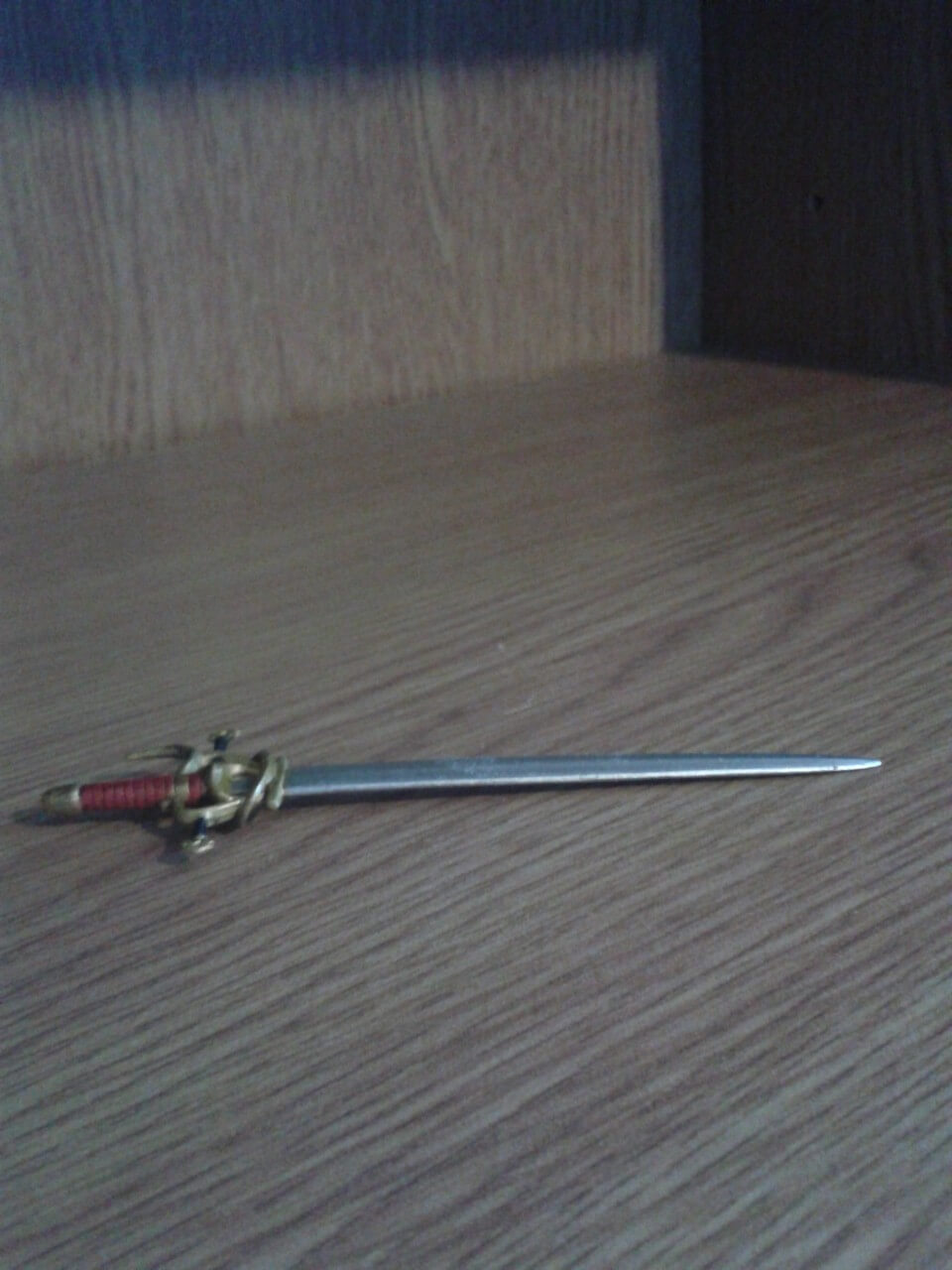 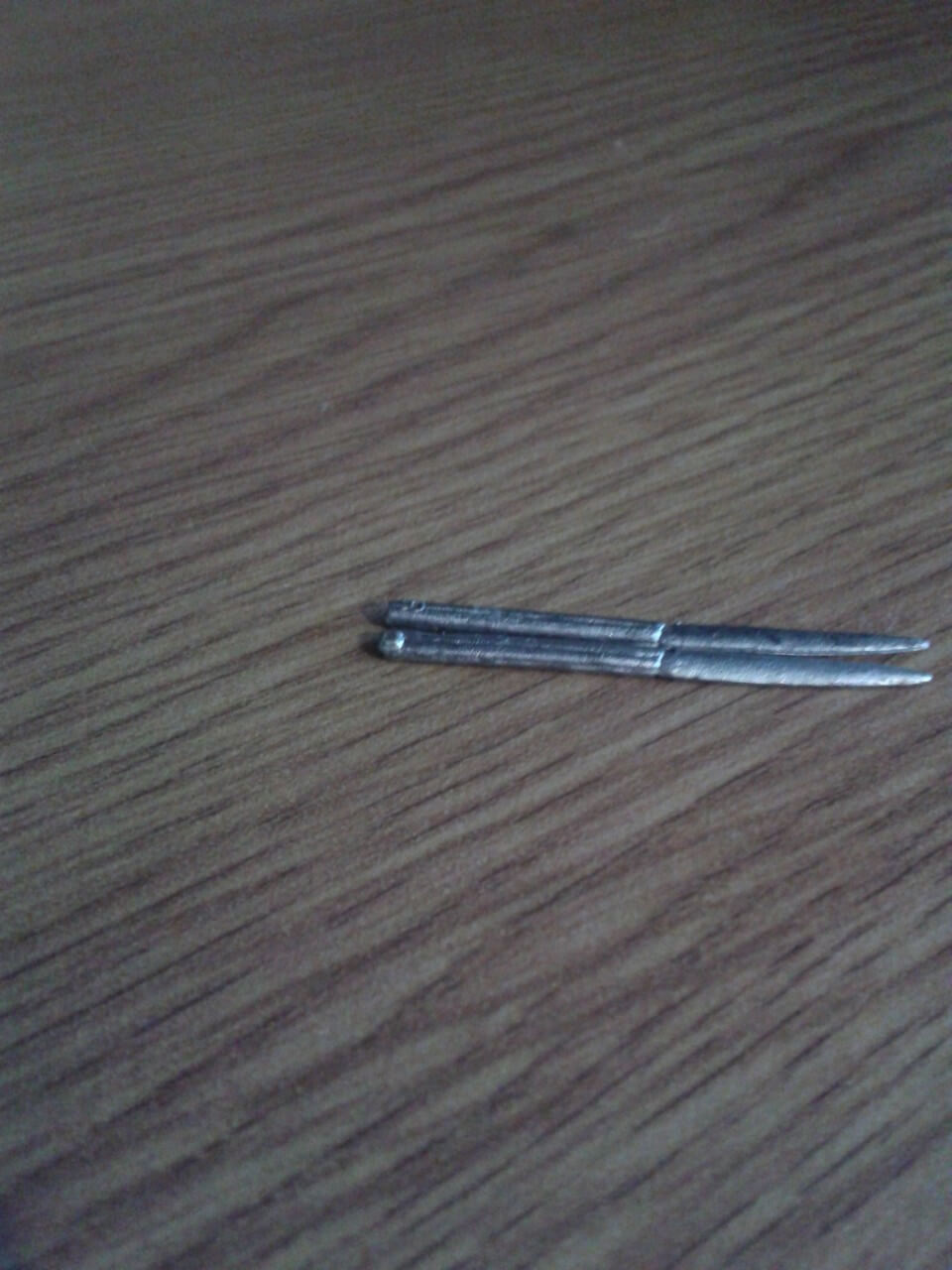 Ezio comes with three accessories, two removable wrist blades and a Captain’s Sword, which fits on his belt very well. One thing I should note as I have a little trouble removing the wrist blades as they are a bit hard to pull out and back in and they are quite fragile but they look great with the silver dry brushing on them.

The Captain’s Sword is great too. I remember it from Assassin’s Creed 2 and it’s a great looking sword, the hilt is very well detailed with gold, black and red paint. It’s rather intricate the hilt. The blade is plain silver and looks rather realistic. It fits beneath the flexible plastic part of the belt very nicely.

He also has throwing knives, though they are sculpted in their sheaths, which is a shame. There are 10 of them just like in the game.

I would have liked there to be some interchangeable hands, even though they are not needed, they would have been nice. 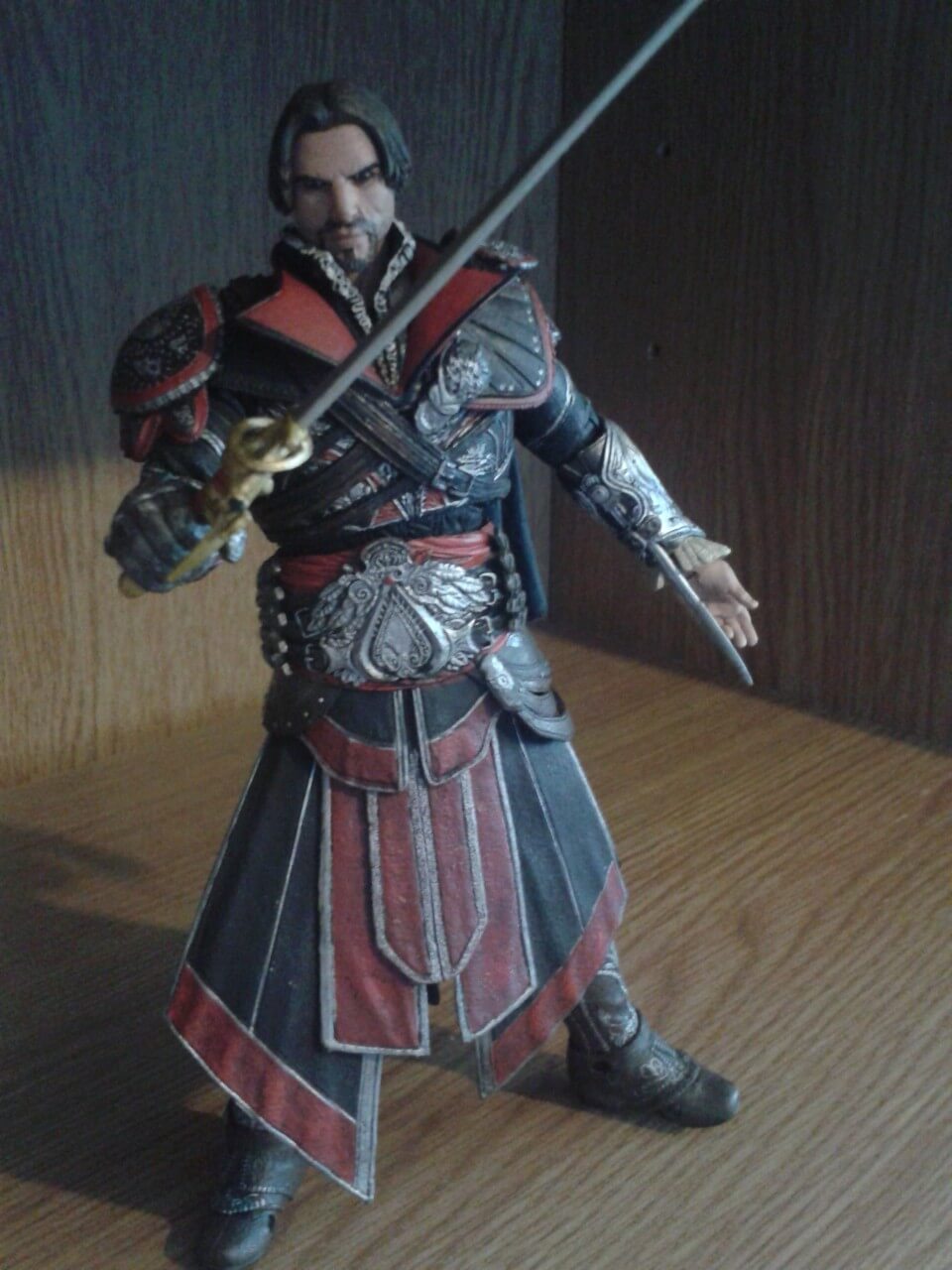 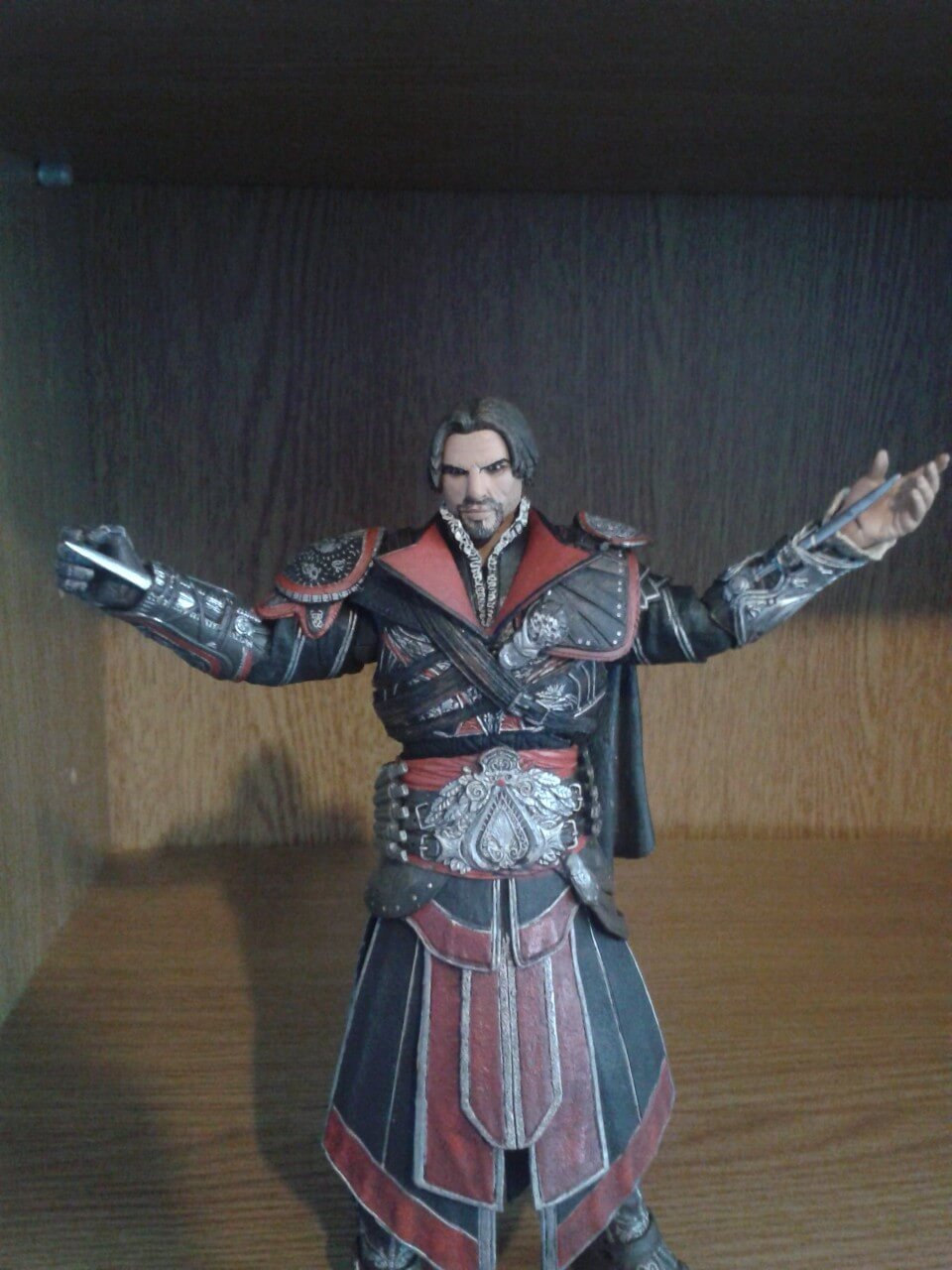 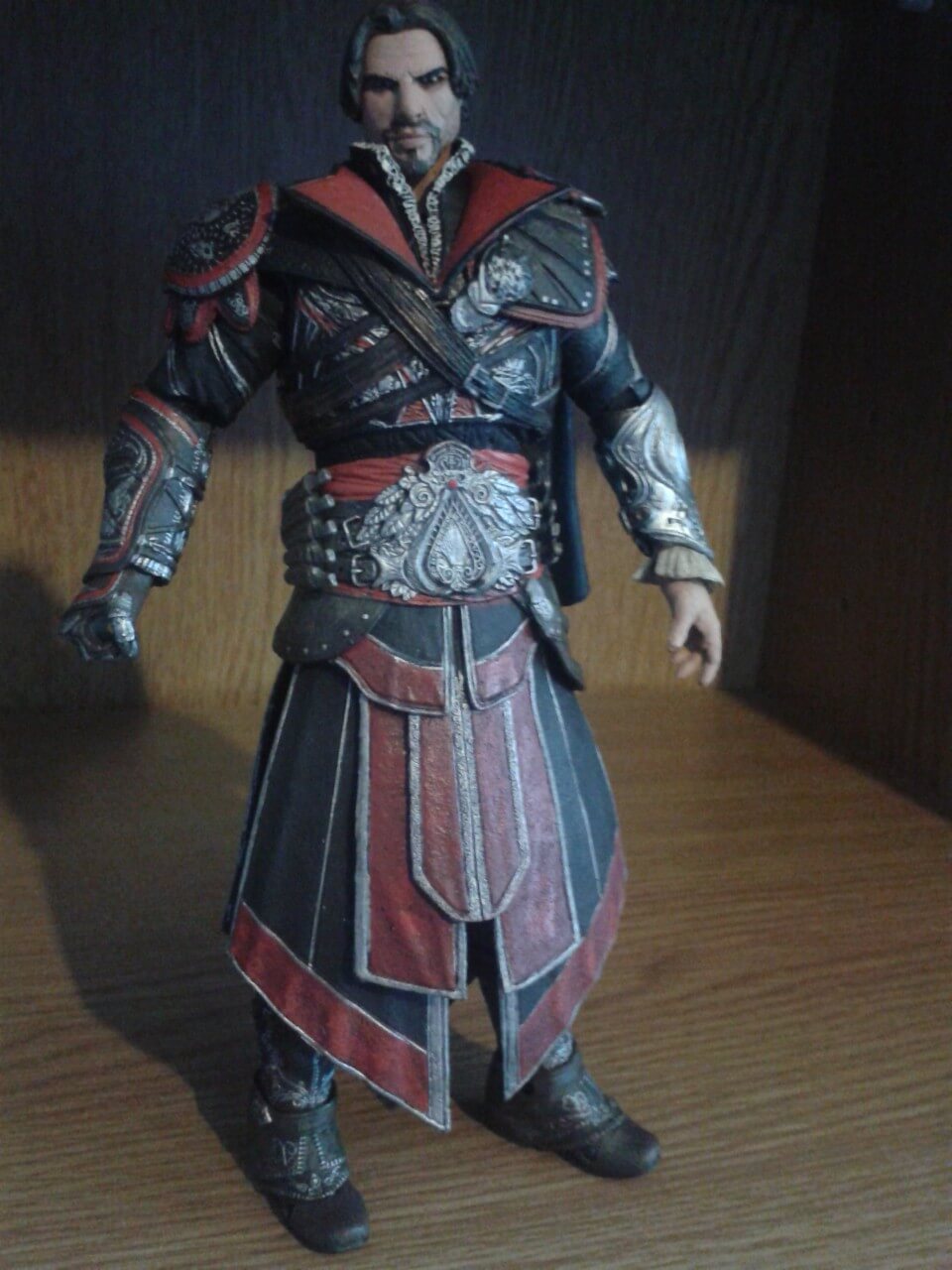 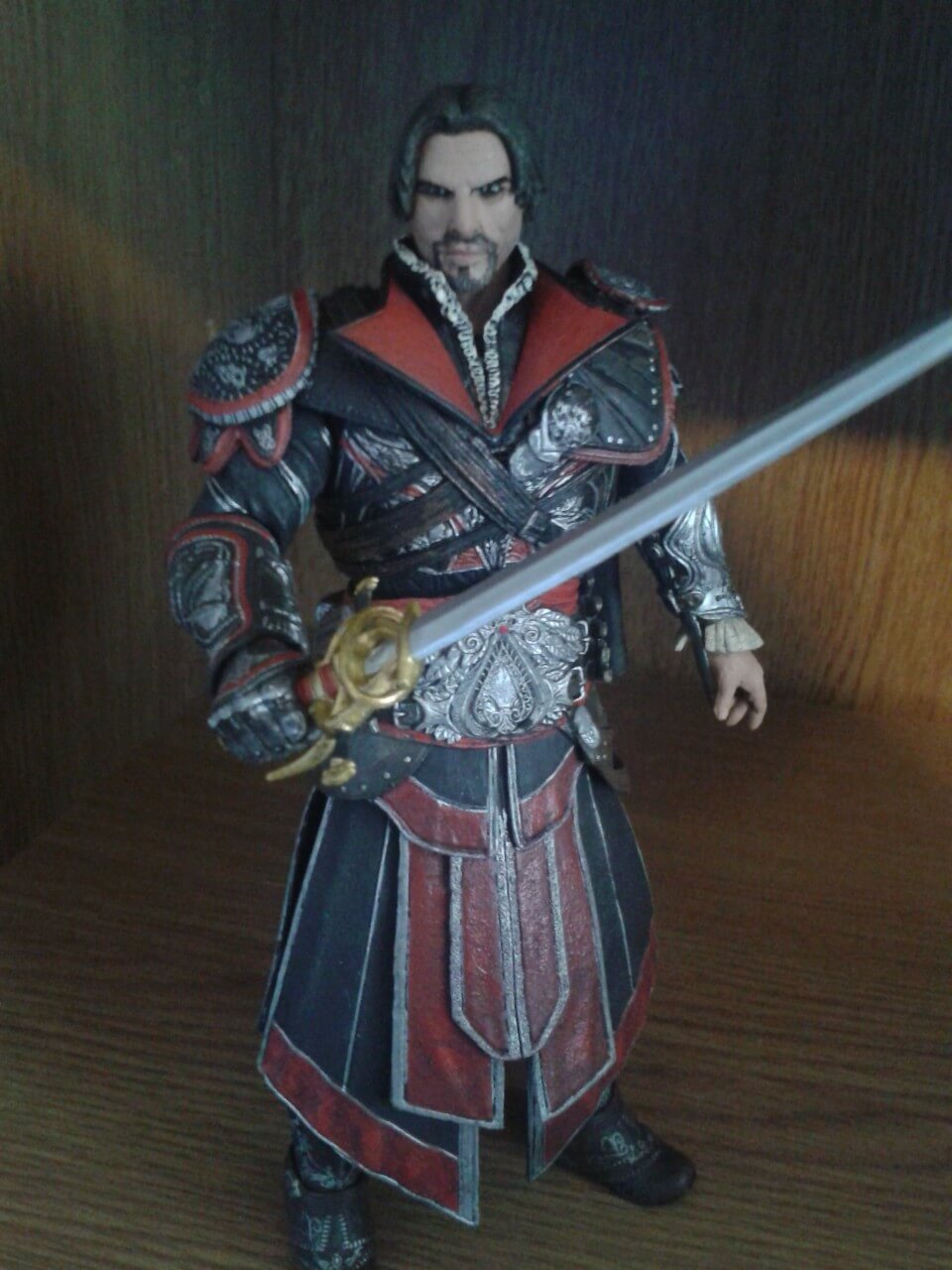 Ezio is packed with articulation I could easily say he’s one of my most articulated figures. He comes with:

Clearly this is a lot of articulation and it works very well with the figure. It’s great that the parts that cover articulation are soft plastic so they don’t hinder the articulation in any way.

Overall I have to say I am really impressed with this figure. The detail and articulation are spot on, really shows how NECA did the Assassin’s Creed figures when they had the license. He’s a bit weaker in accessories than some of the other NECA Assassin’s Creed figures but that does not make him any less interesting. I have the NECA Altair, which they did for the first game, and it was a very impressive figure, but not as good as Ezio in articulation. This really was one killer line.

Now, McFarlane have been taking over the mantle and they started very rocky but are steadily improving. I’m looking to see their version of Ezio and Altair. They will never be as good as NECA’s, but they are not too far off with the detail and range of characters. If you are an Assassin’s Creed fan and have not got an Ezio, or need this one to complete your collection, I highly recommend this figure; it’s excellent.

This figure is long sold out everywhere, so you best bet is to find him on eBay.

UPDATE: Big Bad Toy Store got more stock and still has some of these figures available.  You can also find this Ezio figure on Amazon, and you can always find your way over to eBay and search for a sweet deal on this Ezio Unhooded action figure from NECA. 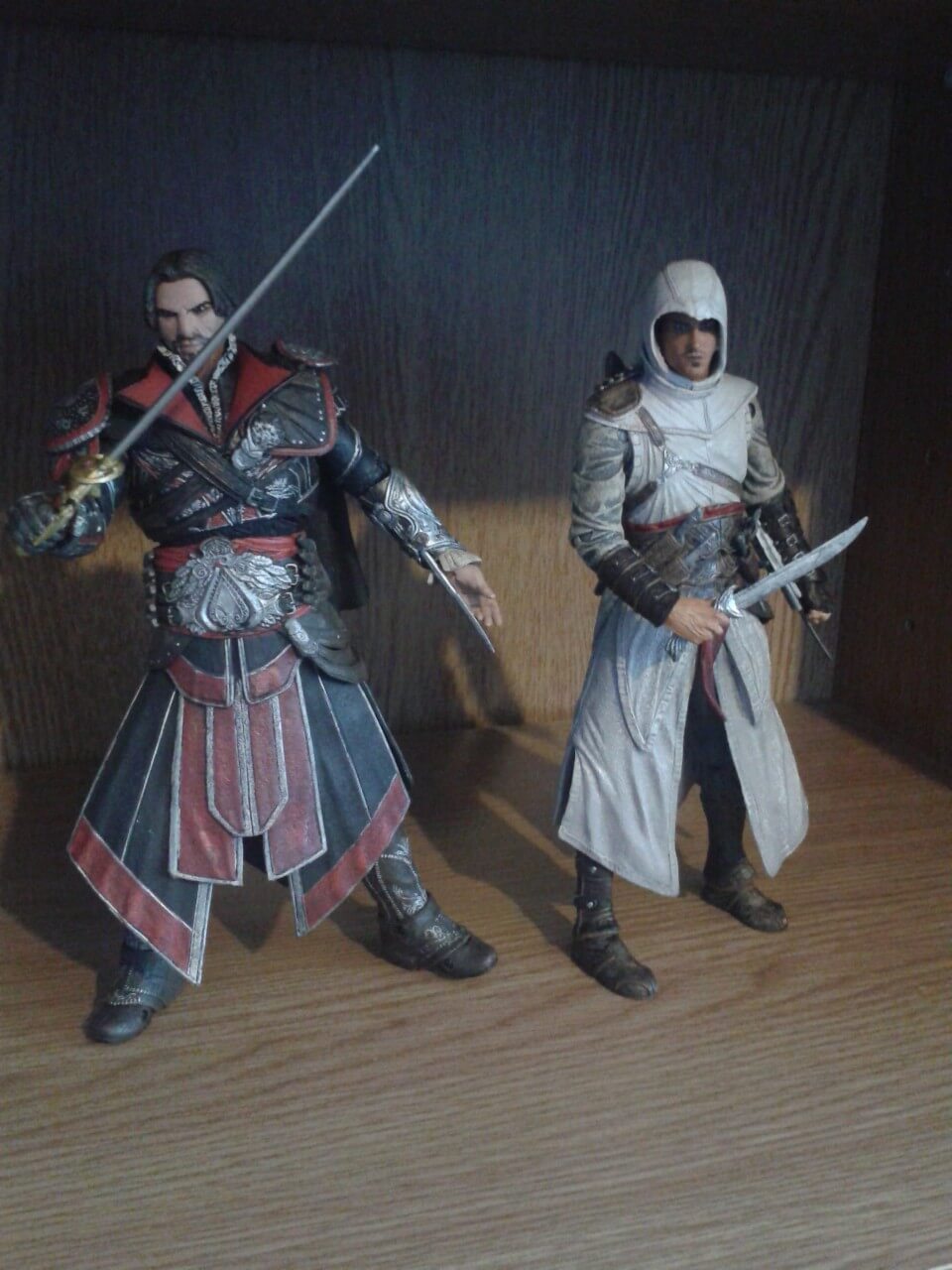 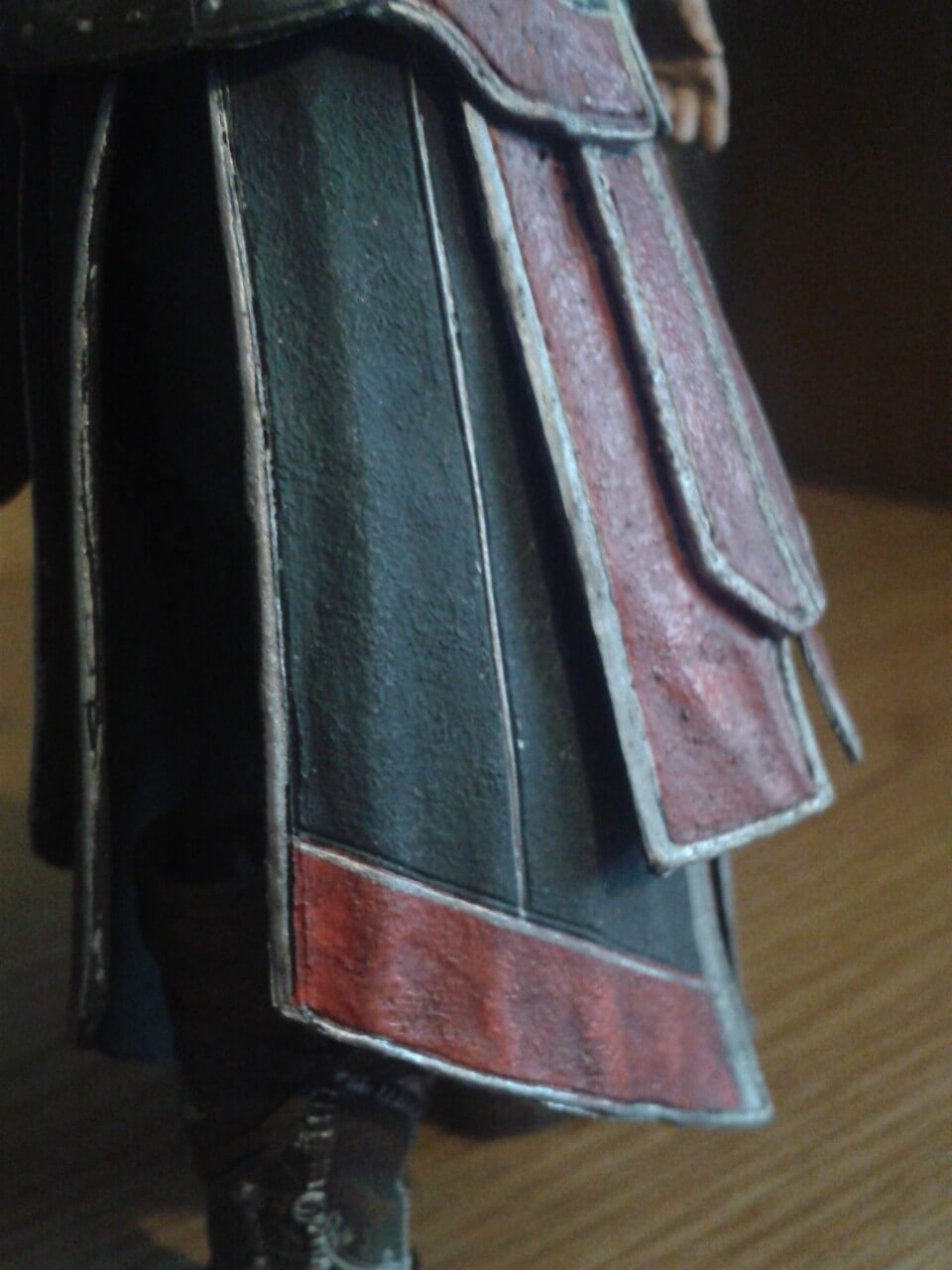 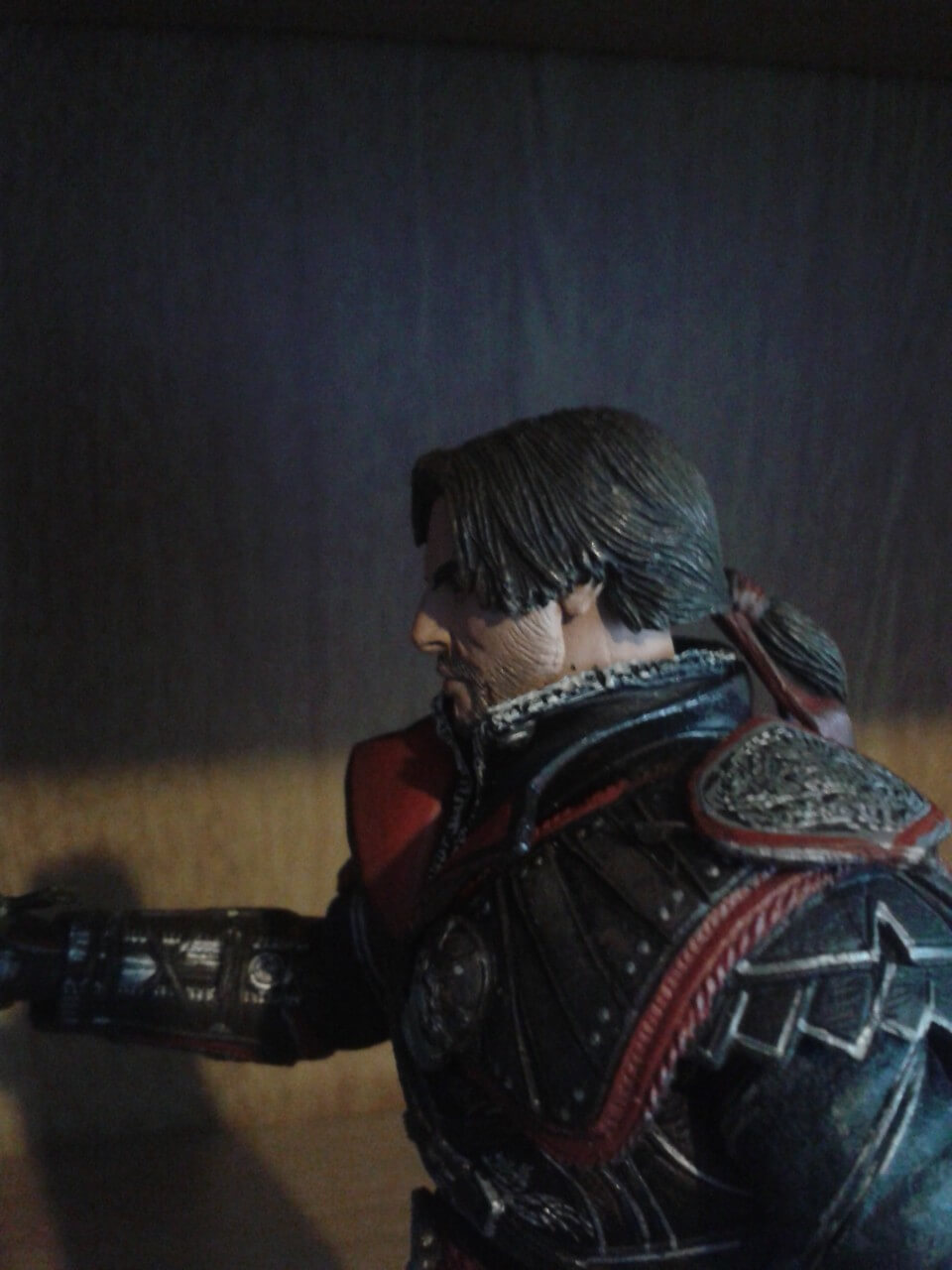 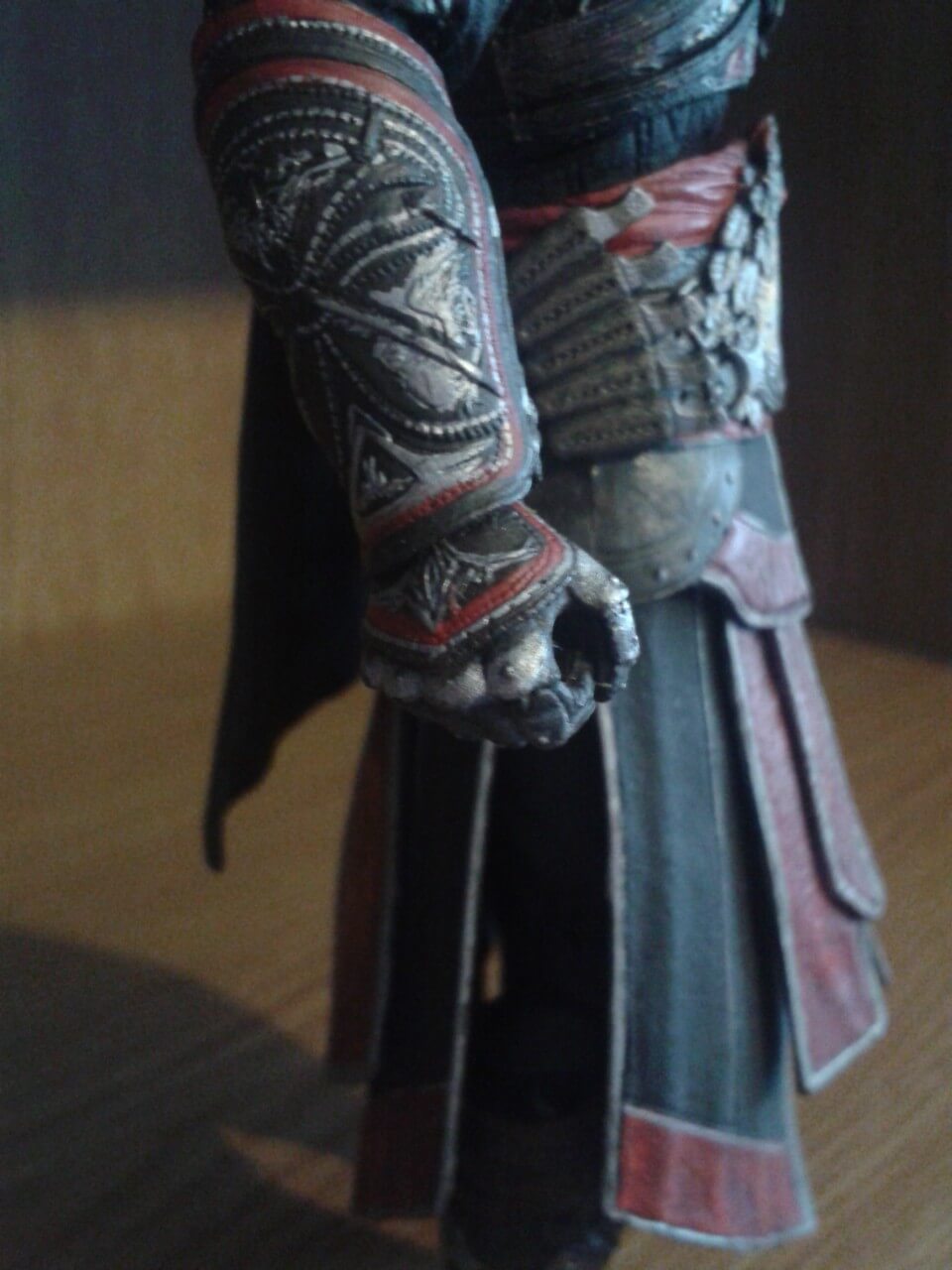 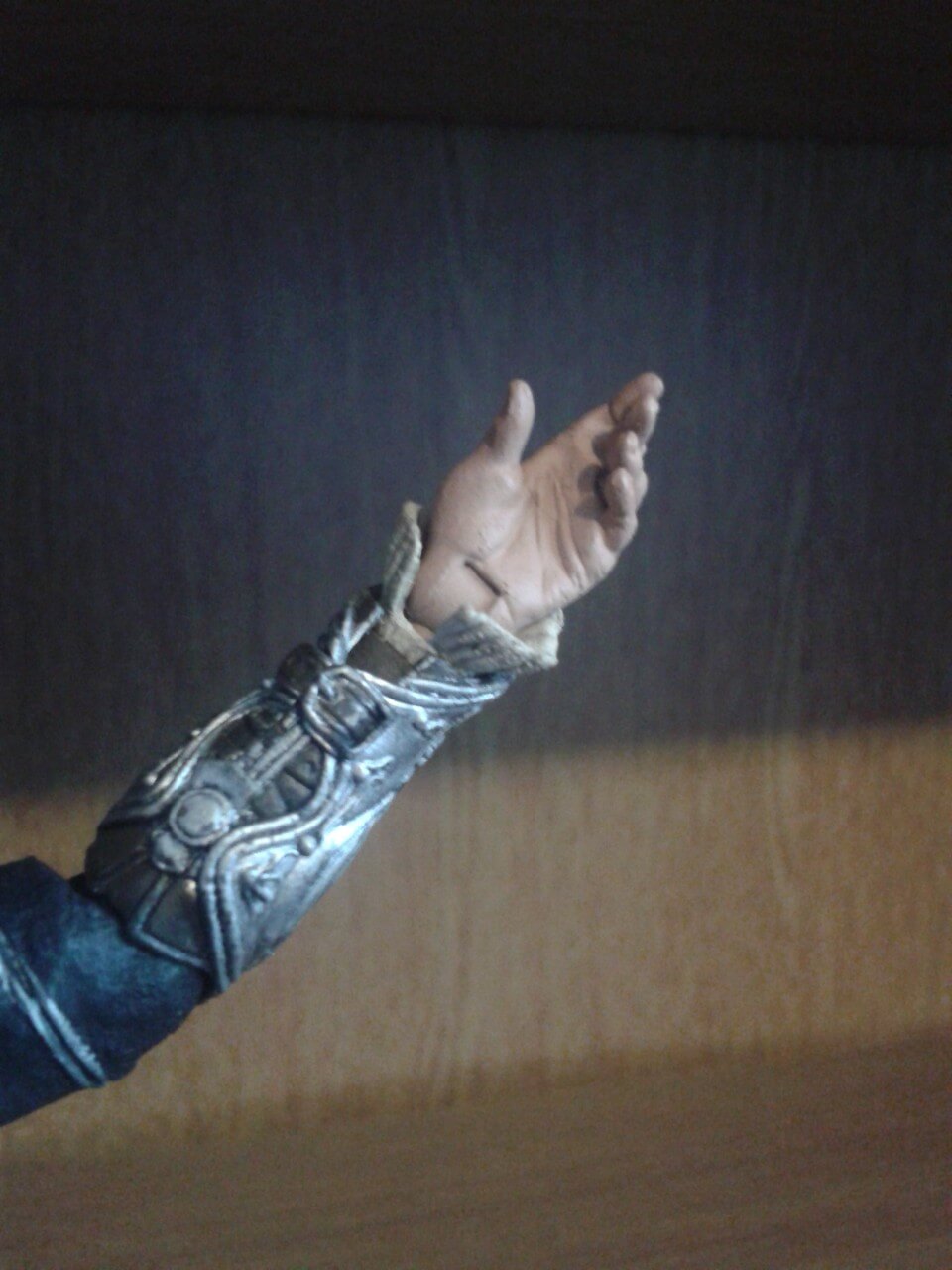