Final Chapter Jason Slashes his way into the 1/4 scale!

NECA has been dominating the 1/4 scale for a while and it doesn’t look like it’s going to change soon. NECA has been bringing the horror icons back into this scale with last years release of Dream Warriors Freddy, this year Jason Voorhees is back!

This 1/4 scale figure is based on his appearance from Friday The 13th Part 4 The Final Chapter. His costume is very similar to that of Part 3 as Final Chapter continues straight on from Part 3. I have the 7″ version which is very impressive but the 1/4 is even better as you can see really see the detail NECA put into this figure.

He’s got blood stains all over his shirt and pants as well as loads of dirt caked into his pants.  At this scale, he does look very imposing and threatening.  Jason comes with his bloodied machete, double-headed axe, and a kitchen knife. These all look very well detailed with the rivets sculpted and painted in the hilts of the machete and knife. The woodgrain effect in the handle of the axe looks very realistic. The blades do have a lot of realistic blood painted on the blades of the weapons. It looks very well done on the axe.

Jason also comes with two interchangeable heads. One with the cut on his head from Part 3 and the other with the Machete to the side of his face wound from Part 4. Both heads look absolutely fantastic and incredibly gruesome. I love the gnarly details in the skin which looks really worn and deformed. The mouth, teeth and eye details are great on both heads. The facial expressions are mostly the same aside the mouth being more open on the eye wound head.

The hockey mask looks fantastic as well with the crack from part 3. The markings on the mask look faded and worn which is a great touch. He also comes with an interchangeable hand with the machete wound which looks absolutely fantastic.

Jason will stand at 18″ tall and features 28 points of articulation and will cost around $120.

You can purchase the figure now from NECA’s eBay and Amazon store before it’s actual release date next month. 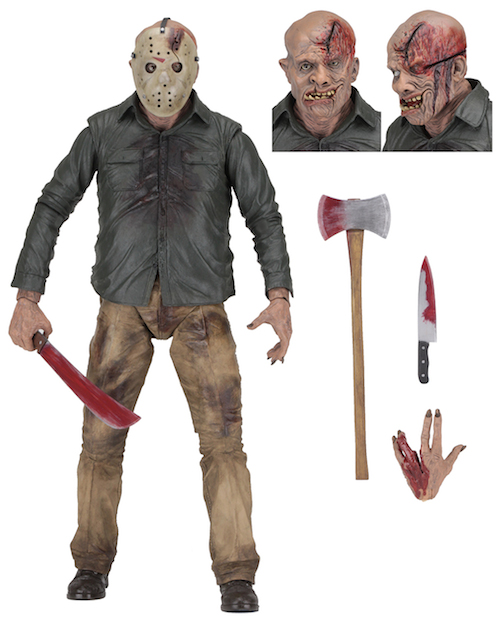