Pre-orders, that is. Mezco’s One:12 Collective Red Skull action figure looks to be perfectly in keeping with the awesomeness of this line of figures.

The Red Skull is back to terrorize you with a bunch of cool accessories and extras! Wait… that sounds awesome. His toothy grimace is very creepy, and from the pictures, it looks like we’re going to have some fun textures on his skull. Let’s check out this sweet figure One:12 Collective Red Skull action figure from Mezco.

How tall will Johann Schmidt be?

Will he have articulation?

Yes, and lots of it! Mezco says they’ve incorporated over 30 points of articulation into the figure.

What will the costume feature?

As with other figures Mezco’s One:12 Collective line, the figure will feature a tailored fabric costume. Here’s what you’ll be getting:

Let’s hear about those accessories and extras!

Probably most exciting of all, this figure comes with 2 hand-painted portraits of the Red Skull, both “newly-designed,” and  5 interchangeable hands, including:

But that’s not all. The Red Skull comes with a Cosmic Cube (world-shattering abilities not included), a belt with a shoulder strap and holster, adjustable, with a Hydra belt buckle, a traditional German Luger pistol, a Hydra logo display base, and an adjustable post to stand him with.

How much will the One:12 Collective figure cost, and where can I order one?

You can bring Johann home to the family for only $80, and you can pre-order him on Mezco’s site, or over on Entertainment Earth.

When will the figure be available?

Mezco estimates the figure will ship early next year. (April to June 2017). 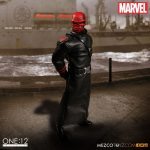 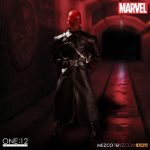 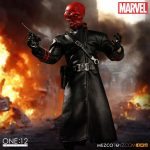 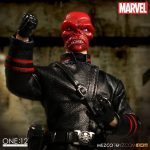 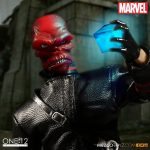 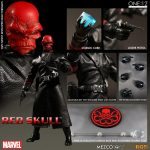