The Walking Dead Comic Series is based on the Eisner Awarding-winning The Walking Dead comic book series from creator/writer Robert Kirkman. If you like the show you should really pick up the comic too. It’s a good read. 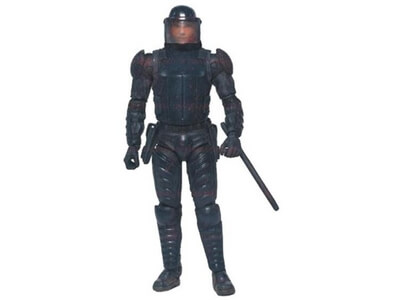 Glenn, an original Atlanta survivor, has become crucial to the survival of Rick’s group due to his ability and agility at getting in-and-out of zombie-infested areas in order to search for food and supplies. Glenn, in full riot gear, features 28 points of articulation and is equipped with two pistols, riot shield, baton, gas can, and removable helmet with flip-up visor. 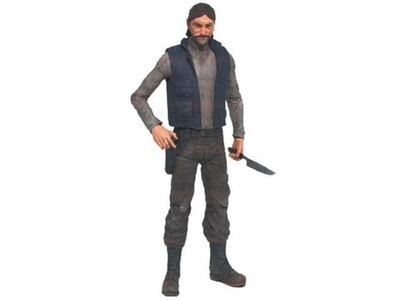 Zombies are not the only threat to Rick and his band of survivors, the Governor is truly the first human antagonist that the group encounters within the comic series. The Governor features 28 points of articulation and includes a kitchen knife, pistol, and alternate mutilated head & right arm. 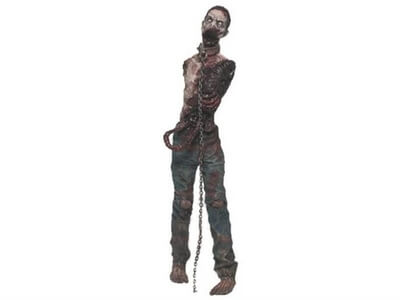 It’s not until Mike, Michonne’s boyfriend, is bit by a zombie that Michonne discovers the true nature of the zombie epidemic. A bite is a death sentence! Michonne quickly realizes that Zombies don’t attack other Zombies and uses Mike as camouflage and protection against the hordes of the undead awaiting her in this new world. Michonne’s Pet Zombie features 17 points of articulation and includes a neck collar & chain, tear off arms & jaw, and push in/ pull out intestines. 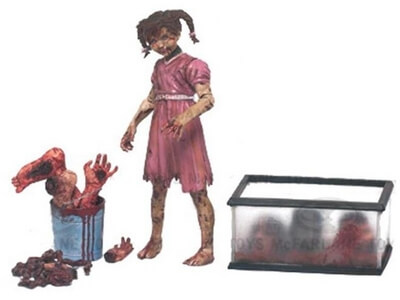 Nothing is stronger than a father daughter bond, as we see with The Governor and his daughter Penny. Infected early on with the zombie virus, Penny has been cared for and fed by her unconditionally loving father. Penny features 12 points of articulation and includes a bucket of fresh body parts (severed leg, severed foot, severed hand, intestines, heart and Rick’s severed hand) that the Governor feeds to her. Figure also includes a fish tank with trophy heads collected by her father. One of the heads can be used as an alternate head for Michonne’s Pet Zombie Mike, allowing you to build Michonne’s 2nd pet and Mike’s best friend, Terry.

Staying true to the comic, this blood-splattered black & white version of The Governor & Daughter Zombie is the perfect addition to any The Walking Dead collection. This box set still includes all the articulation and gory accessories included with the standard figures.

All of these figures are going to be available in June. Pre-Order them now from BBTS!