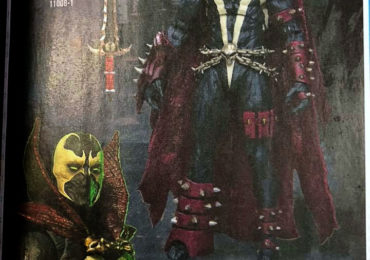 Last week it was rumored that McFarlane Toys will be releasing a 7″ Spawn figure in their Mortal Kombat line. Now a scanned image of the figure has been released and it looks fantastic!

We can see that he’s based on his appearance in the game, even though the character isn’t released yet in the game. Spawn looks just as articulated as the recent Johnny Cage and Raiden figures.

Spawn looks incredibly well detailed and comes with a sword accessory, at the moment it’s unclear if he’ll come with some other accessories. Hopefully at Toy Fair next month we’ll see this figure and find out when the figures released. You can be sure I’ll be after him as this looks to be a fantastic figure!