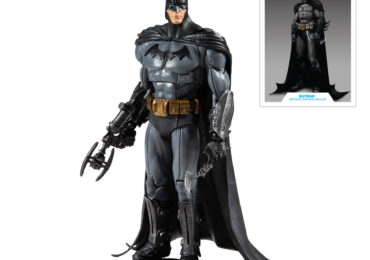 At Toy Fair last month McFarlane Toys revealed a lot of new products from the DC license and two of them were from the iconic Batman game Arkham Asylum. The two figures are Batman and the Joker from the game.

The only company that really released figures from the game was DC Collectibles and as you can imagine they are very expensive now on the secondary market. I saw pics of these that were taken at Toy Fair and I was rather impressed with them and now that McFarlane Toys have released official press pictures I am impressed with them even more!

The sculpts on both figures look fantastic, especially on the suit for the Jojer which looks incredible! Batman looks fantastic too they really captured the look of his costume from the game. Each figure comes with its fair share of accessories. The figures will be released later this summer and here’s the official press release from McFarlane Toys.

When his parents were gunned down in front of him, young Bruce Wayne resolved to rid Gotham City of the criminal element that took their lives. He trained extensively to achieve mental and physical perfection, in addition to mastering martial arts, detective techniques, and criminal psychology. Dressing as a bat to prey on criminals’ fears, Batman fights crime with the aid of specialized gadgets and vehicles, operating out of his secretive Batcave below Wayne Manor.

An insanely homicidal Super-Villain, The Joker’s white skin, green hair, and blood-red lips belie the chaotic nature underlying his cartoonish appearance. The self-styled Clown Prince of Crime has no superpowers, beyond a capacity for incredible violence and a skill at creating deadly mayhem. He frequently concocts elaborate schemes to entrap his arch-nemesis, Batman.

The Joker figure based on the video game Batman: Arkham Asylum

The Joker accessories include blaster, two chattering teeth, and base

Included collectible art card with The Joker from Batman: Arkham Asylum artwork on the front, and character biography on the back