Kotobukiya continues their Marvel Universe fine art statue series with this floating incarnation of the classic Avenger, Vision! The Marvel Universe Vision Fine Art Statue captures the intense yellow and green costume clashing with his bright red skin in a way that only original comic book heroes are allowed to do, and Kotobukiya nailed it with this statue. His face is stern and focused, making his pure-white eyes stand out even more beneath his furrowed brow.

How big will the Marvel Universe Vision Fine Art Statue be?

Though it’s technically a 1/6 scale statue, Vision hovers at a glorious 16” tall, base and all.

Let’s take a closer look at the sculpt:

Vision is just covered with textures! His billowing yellow cape and lime green cowl have a fabric-y mesh texture to them, and to create some cool contrast, the gloves, boots, corset (???) and underwear (????) all seem smooth and shiny. That’s not to say they don’t have awesome sculpt details though! The folds and wrinkles in the shorts and glove really make it look realistic.

Kotobukiya didn’t miss any tiny details, from the yellow gem in his forehead to the muscles on muscles Vision has everywhere else. But the best part…?

The base is super ultra mega cool, and so I think it’s the best part! It gives the illusion of Vision hovering above the rubble of some demolished city, using his abilities to phase through a giant metal girder. The best part about that is that the sculpt/paint around the leg he’s phasing becomes clear, making it look just like the comics! Beneath all that cool stuff, there are chunks of concrete and metal wires sticking out all haywire, and all tied up neatly into a circular minimalist black base. Oh yeah, and Ultron is being crushed beneath his heel. Serves him right!

How much will the statue cost?

Starting now, you can pre-order the Marvel Universe Vision Fine Art Statue for $279.99 on the Koto US website, or over at Entertainment Earth! The statue should be available July 2017.

Peruse the gallery below and en-Vision the statue at your house! 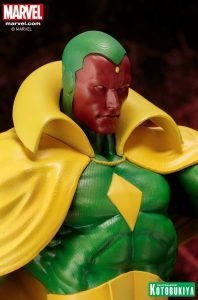 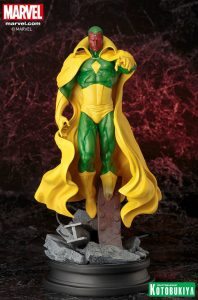 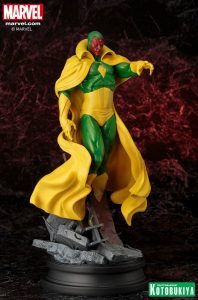 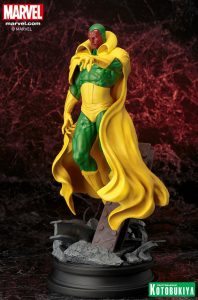 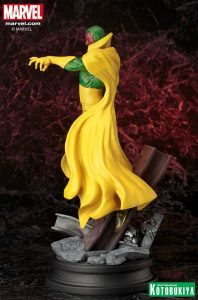 Look at his ghost foot! 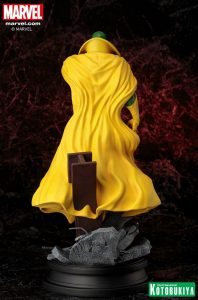 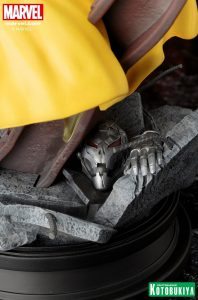