Check Out The Variety In These New Spider-Man ArtFX Statues

UPDATE: The Amazing Spider-Man ArtFX statue is now up for pre-order on Entertainment Earth.

Great news for Marvel fans!  Kotobukiya just revealed photos and details on a new Spider-Man figure, and then revealed that it will be the first of a new line of  Spider-Man ARTFX statues, and we’ll be seeing a variety of characters from the Spider-Man universe.

The statues currently in development are:

This lineup was announced using concept artwork, as only The Amazing Spider-Man’s design has been finalized for now. The statue shows Peter Parker in his iconic costume, made to resemble older renditions, not the powered-computerized one that he’s wearing now, or the one seen in the recently released Civil War movie. The statue will be made in 1/10 scale and is just under 3.5 inches tall, due to his ducking posture. As with other ARTFX figures made by Kotobukiya, this one also has magnets in his feet to keep him stable while displayed on an included base. 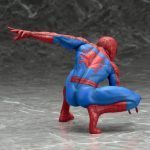 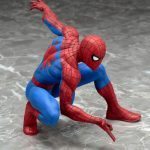 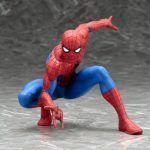 The statue is expected to arrive sometime in December 2016, and can be pre-ordered now on Kotobukiya’s website for $59.99. The remaining Spider-Man ArtFX statues from the line-up have yet to be announced, but it’s great to know that they’ve decided to make an entire Spider-Man ensemble of characters, which is great for any collector, especially since Spider-Man is one of Marvel’s Flagship titles with a long history. Maybe one day we’ll get to see statues of other Spider-Man characters as well such as Silk, Jessica Drew, or (fingers crossed, please, please, please) Spider-Ham.