With the skull of one of his victims held high in Grodd’s… uh, hand?

Many fans of DC’s The FLASH have expressed their utter love of the super villain Gorilla Grodd.  For those who are not familiar Grodd is a hyper intelligent, telepathic gorilla that often employs mind control over his hapless victims, a power he got from an alien space pilot.

Now, on the face of it, that description just sounds silly, I know. But it’s not the concept of an ESP toting Gorilla that makes Grodd such a popular villain. Grodd is a HUGE gorilla who is smarter than your basic human and also MUCH stronger. So it’s really just a plain old good time watching Grodd toss authorities around both mentally and physically.

A little backstory on Grodd: Just a regular ape in Africa when a spaceship hit his home and the pilot imbued him and his troupe with powers. Along with these powers came the kind of awareness that humans are running the planet and animals like Grodd were getting the short stick (so-to-speak).

Grodd and his group of super apes built an advanced gorilla city from which Grodd planned to launch a take-over of the rest of the planet. Grodd is not a good guy nor is Grodd a particularly identifiable character. Well, not unless you have entertained some supreme-race like plans of your own. He’s a bad guy and DC makes no real bones about him having a lack of empathy for the humans or their  human interests. In fact, Grodd murders the alien who gave him powers and actually tries to murder the Flash pretty much as soon as he meets him. Why?  Because Grodd hates humans.

To give you some flavor behind Grodd here are some quotes from the ill-loveable ape:

Grodd: Now that I have your attention… we’ve come to this arena because it’s where the strong routinely defeat the weak. How you so-called higher primates revel in that! Yet outside these walls, you do everything in your power to shackle the mighty and prevent them from fulfilling their destiny! That’s all about to change.

Gorilla Grodd: Quickly, The Flash and his full mentor will be here in seconds. This devolver will transfer one of them into an ape, allowing me to bend his will through my powers.
The Flash: Don’t count it, Grodd. Because besides me, you’ve got a real classic in the house: the Original Flash.
Jay Garrick: The Speed Force just got an upgrade.
Gorilla Grodd: Insolent human. I will pulverize you both. Feel the wrath of Grodd! Activate the devolver. It will turn one of these speedsters into my slaves. 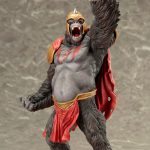 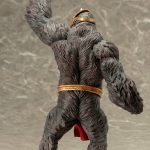 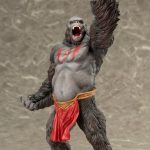 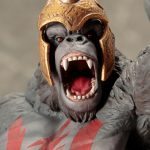 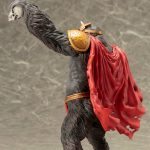 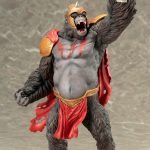 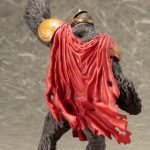 Weirdly enough you just find yourself loving the Khan of Apes, Grodd the Gorilla.  Here’s the announcement for the Gorilla Grodd statue straight from the manufacturer:

A KOTOBUKIYA Japanese import! Kotobukiya’s lineup of statues based on the superheroes and villains of DC Comics continues to grow, and following after Captain Cold is another of Flash’s Rogues: GORILLA GRODD! Once a normal ape living in Africa, Grodd (along with his people) was given heightened intelligence by the pilot of a crashed alien starship. Unlike the other inhabitants of Gorilla City, however, Grodd also received incredible telekinetic and telepathic powers! With those and his unchecked aggression the fearsome ape would attempt to take over world on more than one occasion, though his schemes are continually stopped by the Flash. In the New 52 era of DC Comics Grodd was once again ruler of Gorilla City, and used the Scarlet Speedster’s powers against him (unsuccessfully). That version of the character is now immortalized in the elite ARTFX+ series with this massive and mean presentation of Gorilla Grodd standing on two legs and bellowing into the air with the skull of one of his victims held aloft! The maniacal villain has an incredible sculpt covered in realistic long fur and the snarl on his face will stop heroes right in their tracks. Grodd wears a fluttering red loincloth on a gold belt, and his matching helmet, pauldrons, and ragged cape are removable so you can display him as you like! Sculpted by Ikkei Jitsukata, Gorilla Grodd stands an incredible 10 inches tall in the ARTFX+ 1/10 scale, and the magnets in his feet provide extra stability on his included display base. Whether he’s ruling your shelf standing by himself or fighting with the Flash this gorilla is a fantastic addition to your DC Comics collection

The Gorilla Grodd Statue is priced at $69.99. Gorilla Grodd should be released in May 2017 and you can Pre-order direct from Koto US. Or CLICK HERE to get it from our Amazon affiliate.