Kotobukiya’s Agent Venom ARTFX Statue is the latest in a Spider-Man themed line of statues.

After Flash Thompson merged with the Venom symbiote to regain his legs after his military service in Iraq, he became the hero called Agent Venom. Kotobukiya immortalized Flash’s decision to save the planet by creating a cool Agent Venom ARTFX statue tribute. This is part of a line of Spider-Man ARTFX statues, which includes the Amazing Spider-Man, Spider-Gwen, Venom, Agent Venom, Ultimate Spiderman, Spider-Man 2099, and Carnage. And with this reveal, only Venom, Spider-Man 2099 and Carnage remain.

The Agent Venom ARTFX statue is posed in a dynamic running/dodging/shooting position, with a gun in each hand and his left leg forward. His head also faces to the left. The statues costume is primarily a matte black with the white Venom bug symbol on his chest. The spider-bug-legs turn into white accents you can find on his thighs and torso.

In addition to the two guns in his hands, Agent Venom is also equipped with two more pistols strapped to his legs and waist, along with a gray utility belt full of ammo cartridges.

One of my favorite parts is the Venom-y texture Kotobukiya but on Agent Venoms’ greaves, shoulder pads, and wrist guards. It’s shiny and pokey looking, like it’s going to try and grab and absorb you!

How big will the statue be?

The Agent Venom ARTFX statue stands 7.25” tall, but will include a magnetic, character-specific base which will probably make it a little taller. For some reason that strikes me as kind of small for a statue, but oh well! It’s pretty cool looking.

How much will the Agent Venom ARTFX Statue cost?

Check out the pictures below and let us know what you think! There’s been a bazillion statues coming out lately, are you a fan or no? 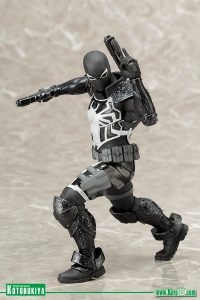 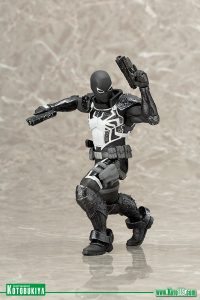 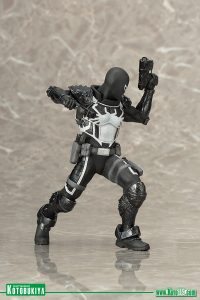 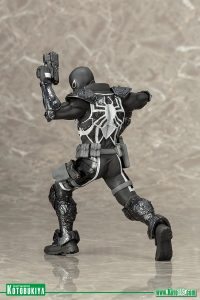 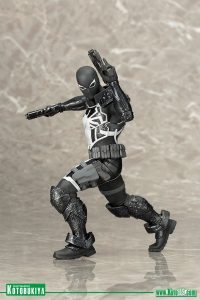