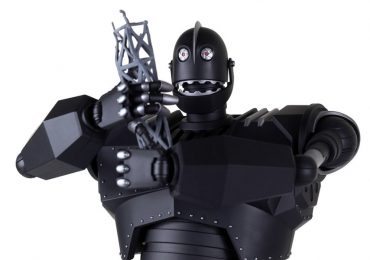 Everyone loves the Iron Giant. Those who don’t probably haven’t even watched the movie yet. The only thing better than Iron Giant is a DELUXE Iron Giant. The one that is currently out of stock and made by Mondo.

This new action figure of the Iron Giant himself is being made by Mondo in what is officially being called the Iron Giant Deluxe Figure Shadow Variant. What this means is that the character’s iron will be black instead of gray. This color is described as stealthy, which is what they wanted to make instead of going with what they describe as “Often funky variations such as Lava punch or Ice shield”. This way, the character is not only stealthy but also extremely stylish. It is approximately 16 inches (~40 cm) in height and features over 30 articulation points, while being made out of high-qualityPVC plastic. It also comes with numerous accessories included. Two interchangeable heads exist, one of which is regular and one with light-up eyes. A seafood sign is also included that features a removable magnetic S that can be attached on the Giant himself. A war arm also comes packaged, as well as a tiny figure of Hogarth that perfectly fits on the Giant’s palm. 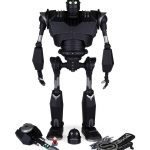 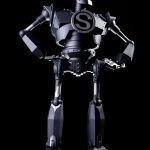 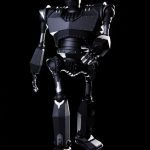 The sales for this figure began on April 18th and the figure was completely sold out on the first day. This comes as no surprise considering that the edition size for this exclusive item is only 150 figures. This means you might have to grab one from other sources, which might become way more expensive than the original price of $300. Not only is the Iron Giant Deluxe Figure Shadow Variant version completely sold out, but even Mondo’s regular versions of the Iron Giant are out of stock at most places, though you can still grab one over at Sideshow Collectibles, which is a testimony to how popular and loved the character is even to this day, almost 20 years since the original release.