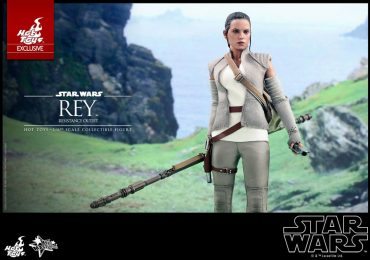 Hot Toys is famous for making some of the best action figures on the market. And whichever license they decide to pursue and build figures for (like General Zod, Cap, Stormtroopers, and even Tonto), they never cease to amaze. And this is definitely the case for the Force Awakens Hot Toys Rey action figure, seen in her resistance outfit from the scene where she meets Luke Skywalker.

The figure will be made in 1:6 scale, feature over 28 points of articulation, and will feature an authentic likeness to the actress Daisy Ridley. The sculpt and likeness are so good, it’s almost like these aren’t action figures at all, but mini clones. Each figure will also be hand painted. Her outfit is also pretty amazing, with each part of the suit being specially tailored and made out of real fabric. And as with all Hot Toys, she comes with a bunch of accessories, including Luke’s lightsaber, a blaster pistol and holster, Rey’s signature staff, and a satchel. In addition, 4 pairs of interchangeable hands are included for holding the various accessories, as well as a hexagonal base for display and posing. The base is simple, black and white, and shows the Republic logo. 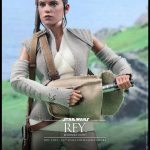 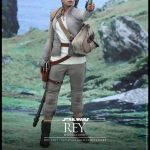 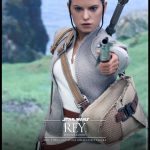 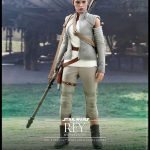 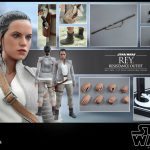 You can pre-order the figure on Sideshow Collectibles website, for $219.99. As always, Sideshow offers a payment plan option if you can’t afford the figure in a single payment. The figure is expected to ship sometime between September and November 2016, which is actually pretty good considering that’s only a few months from now.  Sometimes it takes a year or more after a figure is announced to ship. Here’s hoping that they’re planning a Poe Dameron figure next. The world could use an army of mini-Oscar Isaacs.