Check Out the Articulated Teacup Coming From Hot Toys

So. This porcelain pattern Stormtrooper exists.. Well, I mean… I guess it’s… You know what? No.

Why is this a thing, Hot Toys? What does porcelain china have to do with Star Wars, or Stormtroopers, or anything?! Why would you fashion armor to look like fragile porcelain? Why the HELL are there palm trees on the back of a Chinese patterned freakin’ Stormtrooper?! I mean yes, I understand that there are palm trees and AT-ATs on the new Rouge One poster (the planet Scarif, for those who care), but why are they tossing design cohesiveness out the windows?!

YOU WERE THE CHOSEN ONES… YOU WERE SUPPOSED TO BRING AWESOME DESIGNS TO THE COLLECTORS, NOT BETRAY US!!

The only motivations I can see for this Porcelain Pattern Teacup Stormtrooper b@!#$&*t are, 1.) One of the designers owed their GramGram a big favor and she finally decided to cash in, or 2.) It’s a shameless money grab engineered by some ancient evil spirit who recently reawakened and possessed someone at Hot Toys as part of an evil plan to take over the world. (Too many comic books you say? Never!)

You know what their actual explanation was? The Empire conquered a ton of different people and so this represents the “sweeping might” and the presence of their military force across the universe. Sure, alright, I can live with that. But wait! I’m having a vision of yellow scrolling text reading, “A LONG TIME AGO IN A GALAXY FAR, FAR AWAY…” not “WITHIN THE LAST MILLENNIA RIGHT HERE ON EARTH.” So, unless there’s some sort of parallel planet that happened to independently give rise to the Han Dynasty in Ancient China, that’s a nonsense cop-out.

That all being said, I guess I’m somewhat obligated to describe exactly what’s going on here:

How tall is the Porcelain Pa ttern Stormtrooper?

Is it articulated or did they just give up after painting it?

Yup, it’s articulated. We got over 30 points of articulation.

Does it come with accessories? 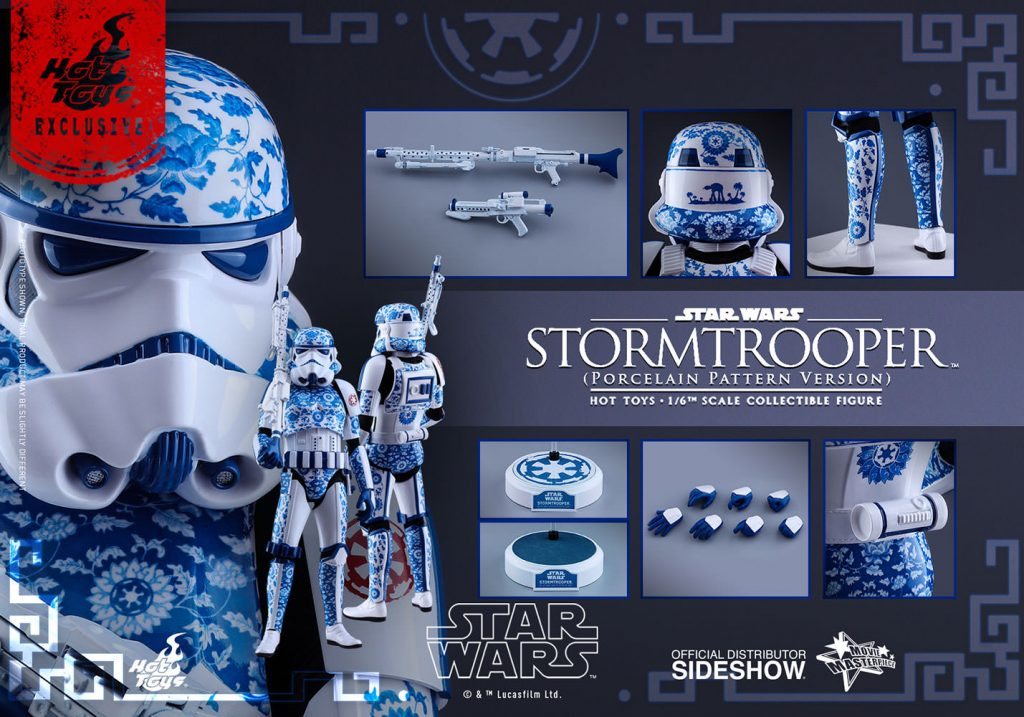 Here’s the whole enchilada. I mean, the pattern itself is gorgeous and I actually like the blue and white, but why in the world would you say, “Hmm, you know what would improve a Stormtrooper? BLUE FLOWERS.”

Okay, I think I’ve bottled my disappointment enough to discuss the deco.

The figure is primarily white with a floral blue teacup pattern all over it. Some areas, including the butt, crotch, upper chest, and inner calves are blue with a white pattern instead. Most additional detailing, like the eyes, gas mask details on the helmet, and piping on the leg armor and shoulders are in blue against pure white.

Two specific design elements that I really don’t like include the freakin’ tropical AT-AT nonsense on the back of the helmet and the red Imperial Corps logo stamped on the arm. If we’re going to acknowledge the blue and white porcelain floral print, the aggressive blood-red stamp looks like a last-minute addition.

And the best part: How much is this figure going to cost?

You can pre-order it from Sideshow Collectibles for $234.99. It’s expected to ship late summer/early fall 2017 (July-Sept.). Just in case your Stormtrooper collection looks a little too badass or intimidating and you want to bring it down a couple (few [many]) notches.

Here are some pictures. I’d love to hear your thoughts! 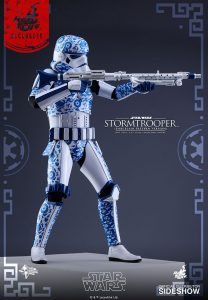 Stormtrooper aiming at whoever designed his costume 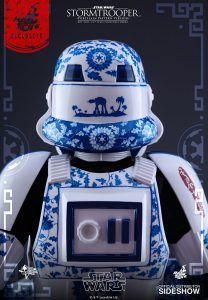 The out-of-place palm trees and AT-AT 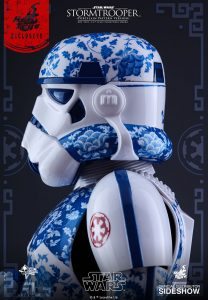 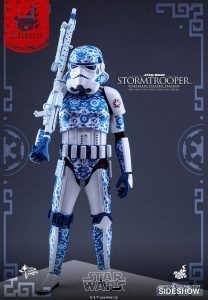 Combining this armor with their preexisting lack of aiming ability is really not helping the Empires reputation. 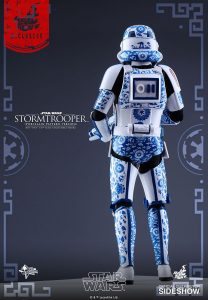