Okay, so I just gotta say, I saw the words spring loaded mouth piece which immediately got me stoked for this new Herocross figure. I may have mentioned this once or twice, but not including the little mouth on Xenomorph action figures is like not including… an important thing that ought to be included (–> really bad at similes). But, all that is beside the point because Herocross has done a fantastic freaking job with the articulation on this Alien Queen. SPRING. LOADED. MOUTHPIECE!!! 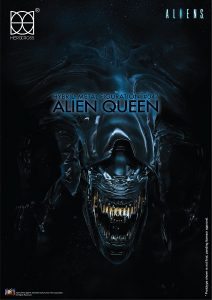 Look at the pretty teef!

Ahem. Well, it’s also incredibly detailed, down to the teeth. Literally! The teeth are silver-colored metal alloy with a hint of bronze near the gums. There’s more bronze/radioactive yellow detailing on the exoskeleton (rib cage area mainly) and some really intricate detailing on the hands and heads especially, as well as along the outside of the legs. Herocross

How tall does Her Majesty, the Royal Xenomorph Queen stand?

The Alien Queen figure stands 7” (18cm) tall, but I’m more interested in her length from head to the tip of her ARTICULATED tail! From the pictures it appears as though the head and the tail are both much larger than the rest of the figure, comparatively.

Other than the tail and mouth, what articulation does the Alien Queen have?

Her Majesty, the Alien Queen is a dedicated yogi (bet you didn’t know that!) and is very flexible. The figure has 34 points of articulation, in addition to a fully articulated tail, adjustable back fins, a retractable head, and interchangeable hands. And, just for a little added badassery, the articulated little mouth is spring-loaded!

Fun fact: Xenomorphs can crush a mans skull with their attack mouths! Isn’t that fun?!

The interchangeable hands are the only accessories that come with the figure, but who needs accessories when you have a freakin’ articulated Xenomorph attack mouth. I’ve been waiting for a Xenomorph figure with an articulated attack mouth and tail for my whole life it feels like, so I’m kind of excited. Anyway, the Queen comes with a set of interchangeable small hands and a set of big hands.

What is it made out of?

This metal diecast figure is made of hybrid metal, which is a fun science-y sounding phrase that means the figure was constructed using a metal alloy and probably includes some nonmetal parts.

How much does the Alien Queen cost?

You can bring Her Royal Highness, the Xenomorph Queen home for $99.99 when it’s released in January 2017. The figure should start going up for pre-order very soon.

Until you meet Her Majesty in person, bask in her awesomeness using the pictures below! 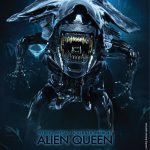 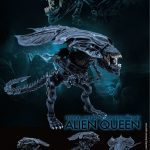 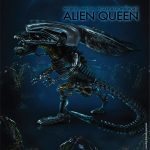 Check out the yellow/gold/bronze coolness on the legs and neck! 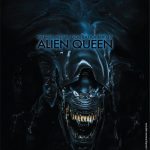