The Action Figure Fury team hit San Diego Comic Con hard this year, with complete photo galleries of all of the best booths, including the Hasbro Star Wars booth. We also did a write up of what was shown in the booth. The toy company has now released some official images of the new Hasbro Star Wars products that were revealed both in their booth and at the Star Wars panel.

Note: Some images are large and may need a few extra seconds to load.

Assemble your own fleet of STAR WARS: THE BLACK SERIES TITANIUM SERIES premium vehicles based on the epic Star Wars films. These collectible vehicles include an X-WING, B-WING, DARTH VADER’S TIE ADVANCED, LUKE’S LANDSPEEDER, SLAVE I and more! Each pack includes one vehicle and one collector stand. Each sold separately. 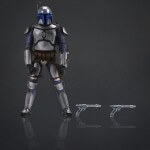