Wait, Chewbacca Mom Got Her Own Action Figure?

[NOTE: Every so often, a story slips by us, but once we become aware of it, it’s too juicy not to bring to the attention of our readers who may have missed it the first time around. Such is the case with the Chewbacca Mom action figure, which Hasbro presented to Candace Payne back in June. This sort of story is always fascinating because it illustrates the impact that simply sharing something, be it a video, photo, or something else, can have. Every so often, someone who is just going through life takes a moment to share something, and that moment of truth, silly or not, can break through and resonate. Anyway, apologies for missing this one!]

Candace Payne, otherwise known as Chewbacca Mom, is a well known internet sensation. After posting a video of herself laughing while wearing a Chewbacca mask on Facebook, it has 160 million views, 2.9 million likes and 3,351,479 shares.

The original video had the description “It’s the simple joys in life….” and since posting that video, she has been on the Late Late show, met J.J. Abrams, and even sang the national anthem in Minute Maid Park. Even with all of that, I seriously doubt she was prepared for what Hasbro had planned.

Hasbro invited Payne to their headquarters where they presented her with her very own, one of a kind Chewbacca Mom action figure variant. What makes this figure special you ask? Well the head of the figure is not modeled after the Wookie we all know and love but is instead the head of Cadence Payne. Even better, it comes with a Chewbacca mask accessory, and is loaded with 13 phrases heard in Payne’s original video, including “I am such a Happy Chewbacca!”

“So the weekend after this happened, I was able to go to the Facebook headquarters, and meet an incredible and integral part of this story and this journey, and I feel like today, right now, this moment, is a second divine moment that’s happening. So, I want you, if you know how to use Emoji’s, all of you out there in Facebook live world, I want you to do the handclap for these amazing people that develop stuff that your kids have…thrown at you and played with.” 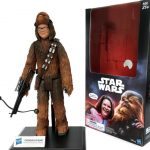 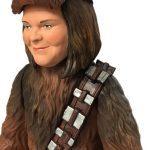 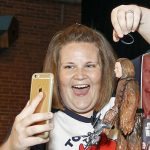 So, we got two things out of this news. First, if you put yourself out there, it can yield some pretty amazing results. And second, if you want Hasbro to make you your very own action figure, like the Chewbacca Mom action figure, you have to get over 3 million shares on your Facebook video. Good luck!

The Chewbacca Mask That Inspired It All

Also, for those interested, you can order the Chewbacca mask made famous by Payne over at Amazon, and Entertainment Earth (though EE lists the masks as temporarily out of stock, so it may take a bit of time to get one there.)