1n 1957, American bodybuilder and actor Steve Reeves went to Italy to take on the role of Hercules, in a low-budget Italian movie about the quest for the golden fleece. And because Hercules turned out to be a huge success, Reeves became an international action movie star, starring in a series of sword ‘n sandal epics. Not surprisingly, his career served as an inspiration to modern-day action icons like Sylvester Stallone and Arnold Schwarzenegger. So it’s really cool to see groups like GoHero putting together an epic Steve Reeves Hercules action figure. From what we can see, it looks like a fitting tribute to one of the first, and one of the best action heroes.

GoHero hasn’t released information on the height of the figure, but it will be 1/6 scale, which would mean a little over 12 inches (30.4 cm) for the 6’1″ Reeves. The figure will have full articulation, feature an authorized, authentic likeness of Steve Reeves in Hercules form, and have a new Phicen Seamless Muscle Body that’s modeled after Reeves.

Costume-wise, the figure comes with the tunic from the film, a red tunic as seen in the iconic art for the film, a waist belt, sandals, studded wrist guards, a studded battle vest, and a short cape with medallions. For accessories, the demi-god will come with an ancient greek sword, metal chains with cuffs, a war club, and a display stand. The figure will come in full-color packaging.

GoHero is offering an exclusive version of the figure as well. This version will also include a Steve Reeves t-shirt, a hand numbered and signed Steeve Reeves International Society Certificate of Authenticity, and a book with rare behind-the-scenes photos, including never before seen ones from Steve Reeves personal collection, poster art, lobby cards and more.

OK. If you’re interested in the exclusive version of the Steve Reeves Hercules action figure, you should act fast. That’s because GoHero has produced on 50 limited edition figures, and they’re available only through GoHero directly, at a price of $199.99. 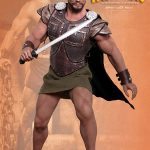 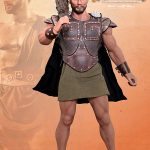 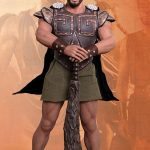 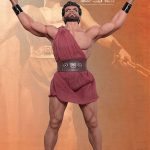 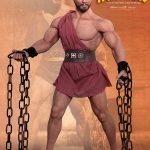 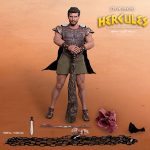 Otherwise, you can head over to Entertainment Earth and pre-order the regular edition of the figure for $179.99. According to EE, the figure will ship in January, 2017. GoHero hasn’t said if the limited edition set will ship any sooner.

Definitely a figure fit for an action hero.