The Ghosts and Goblins Action figures may come with multiple figures.

There are few action figures I’m looking forward to as much as the upcoming Ghost ‘n Goblins action figures from Union Creative. So my excitement levels are through the roof now that they’ve revealed some additional official photos for the figures and said that they hope to have them ready for pre-order soon. 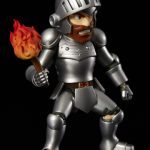 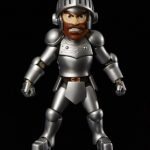 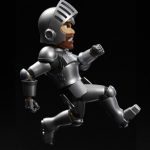 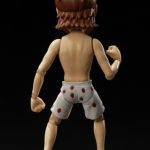 We don’t have any official details yet, but from the photos, we may be getting two figures, an armored and unarmored form for Arthur. Though, if you look closely, you can see gaps in the armor and the unarmored Arthur below, so we may also be getting removeable armor, which would be AWESOME! Can. not. wait!

And this news is particularly meaningful to me because I grew up on Ghosts ‘n Goblins. It was maybe the third or fourth game I ever got for the NES, and I spent countless nights perfecting my jumping and javelin throwing skills. This game was hard! (For me, anyway.) And when Super Ghouls ‘n Ghosts came out, the cycle of sleepless nights and training started all over again.

So at this point, we don’t have any official details. All we have to go off are photos that Union Creative provided from Summer Wonder Festival 2016. Which, first off, how awesome is it that the provided both the armor and boxer form of Arthur. Hint: it’s REALLY COOL. From the photos, it looks like the figures won’t be too big. Based on its size in relation to the business card, I’d say the 4 to 5-inch range. However, it does look like the figures have a lot of joints, and will have some really great articulation. And I love the accessories they’re including.  From the photos, it looks like we’re getting the javelin, knife, cross, torch and axe, and a pair of armor totems, including the golden armor. 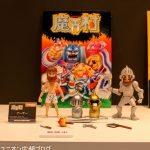 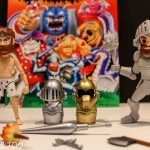 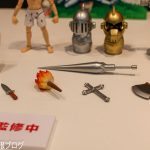 That’s actually a pretty awesome loadout. That’s enough that if you got creative (pulling in some zombie / skeleton type figures from another source), you could recreate some sweet scenes from the game.

Again, there’s no word yet on when we might be able to pre-order the figures, or what they’ll be going for, though I wouldn’t expect them to be too expensive. However, according to the folks over at Toyark, Creative Union has said they want to release the figures this year. I really hope they release a few zombie figures or something like that to go along with Arthur, or start releasing cool figures like this for other NES classics. Bionic Commando anyone?