Star Wars: The Force Awakens gave us a lot. A lot of the same (another Death Star?), a lot of angst (seriously, though, how many stormtroopers has Kylo Ren murdered after they laugh at him for one of his tantrums?) a lot of new characters and a lot of fun. Among the side / support troops, however, no one was as cool as the First Order Flame Troopers. In a world of lightsabers and blasters, a flame-thrower might seem a little old-school, but what’s that, I can’t hear you over the crackle of flames as we lay waste to your desert village! *ahem* Anyway, to properly celebrate the awesomeness of this trooper, Gentle Giant has just gone live with pre-orders for their First Order Flame Trooper Mini Bust.

The Flame Trooper Mini Busts are 1/6 scale, and will be approximately 7 inches (17.8 cm) tall by 8 inches (20.3 cm) wide by 6 (15.2 cm) inches deep. The busts were designed, modeled and prototyped using cutting-edge 3D technology. In addition, each mini bust is hand cast, hand painted (seriously, though, take a moment to admire the awesome paint job and texture in the close-up photos), hand numbered, and comes with a certificate of authenticity. 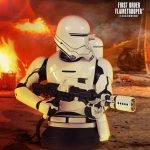 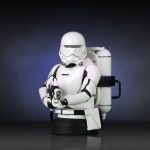 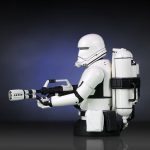 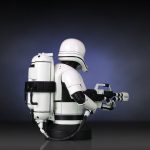 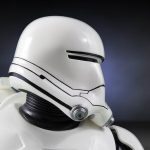 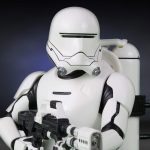 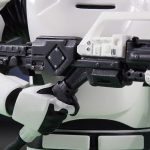 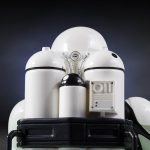 The Flame Trooper mini busts are expected to ship in Q4 2016, or basically right around the same time that Rogue One will (hopefully) be rocking our faces in theaters.