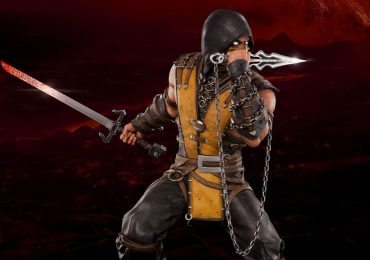 Pop Culture Shock has recently announced and released a teaser image for their new Mortal Kombat X Scorpion statue. Now, finally, they’ve released detailed information and pictures. Two versions of the statue will be made, a Retail Edition and a PCS Exclusive.

Both of the versions of the Mortal Kombat X Scorpion statue are ¼ scale. Their height will be approximately 21” (~53 cm) and they will be handmade out of high-quality polystone. The details on the sculpt and the paint are pretty amazing. Everything is being made to resemble the character’s appearance in the video game as much as possible.

The PCS Exclusive version, which will be a bit more expensive, will come with LED light-up eyes, and both a switch out sword and bloody switch out spear. Both figures come with a certificate of authenticity and a lava-themed base. Scorpion, along with Sub-Zero, is one of the most memorable characters from the long franchise and is definitely getting a statue worthy of his legacy. 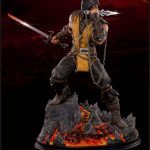 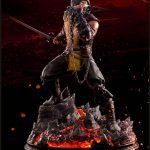 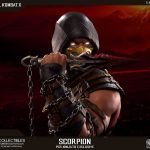 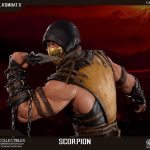 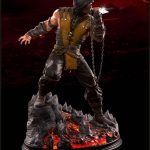 So let’s talk price for the both versions of the Mortal Kombat X Scorpion statue. The regular version costs $424.99 (the suggested retail price may vary between retailers), while the exclusive version will cost $444.99, and only be available through Pop Culture Shock’s webstore. The exclusive version will be limited to 275 pieces, while it’s not yet known what the edition size will be for the regular version.

The pre-order period has begun, with both the Exclusive Version and the Regular Edition available at Pop Culture Shock, and it should show up soon at additional retailers. The estimated release date will be sometime in the third quarter of 2017. Also, if you pay for the statue in one payment, PCS will give you a 10% discount, which is nothing to sneeze at considering the price of the statues. If you’re a Mortal Komat and/or Scorpion fan, the only thing you should be saying regarding these statues is “Get Over Here!”