DreamEx is back with two new additions to the Teenage Mutant Ninja Turtles 1/6 scale series, which already includes Shredder and a remarkably bad-ass looking Casey Jones. The newest plastic heroes in a half shell are going to be Leonardo (the blue one, for the non-80’s and 90’s babies) and Raphael (the red one). Let’s take a closer look at the newest additions to the DreamEx TMNT series!

The two figures are both just under 11” tall, which means there are some really big mutant turtles running around the sewers…

Is it safe to assume that ninjas are flexible?

Yes! These incredibly detailed figures are marketed as having “extensive articulation” but haven’t yet released a specific point-of-articulation count. However, looking at the pictures, I think I’m seeing some double-jointed knees!! But the elbows look to be just a standard hinge-like joint. Oh, my god I just realized they have toe articulation. Radical!

Other than red and blue, what do they look like?

They look ‘roided out, that’s for sure! Underneath the realistically textured turtle skin likes the rippling muscles of Arnold Schwarzenegger at his prime, wiggly veins and tendons sticking out and all. It’s kind of intimidating honestly. The quad game is so strong … Can you believe all they eat is pizza?

Anyway, the shoulders have this nice crocodile texture, as well as on the top of their shiny green noggins. The front part of their shell is really cool, a nice textured earthy-beige, and the back of the shell (the, uh, shell part) looks super realistic. Like, PETA calling ‘cause it looks like a real turtle shell realistic.

The two figures come decked out in their classic ninja-inspired gear, namely the mask (which has real cloth bits), elbow and knee pads that also have an elastic cloth band, and dirty leg wraps to protect the turtle’s delicate shins. They also come equipped with a brown leather utility belt with magnetic-closure pouches on both sides, and a monogrammed belt buckle with an R or an L, depending on the figure.

Now for the fun part- accessories!

The two DreamEx TMNT figures both come with loads of accessories, and some are character-specific, so I’ll list the shared ones first, and get into the specifics after.

Both figures come with 2 interchangeable head sculpts, one snarling in blind rage (literally, this sculpt doesn’t have pupils painted on like the other so… actually blind), and a happier looking one with green eyes. They both also come with 8 total sets of nubby 3 fingered turtle hands in various positions for holding their variety of accessories. Both ninja turtles also come with 2 slices of pizza, and a beige-ish communication device.

Leonardo comes with two katana swords, and an extra leather bandolier to strap the swords to his shell. The swords come with a wrapped sheath that looks like the leg wraps on the turtle’s shins. Whether or not it’s real leather, it looks gorgeous and genuine; a nice burgundy with what looks like functioning metal buckles! In addition to that, Leonardo also comes with an elastic thigh sheath for his 3 throwing knives. The knives have a blue wrapped hilt, which looks really nice with all the other blue accessories Leonardo loves. Leonardo comes with three ninja throwing stars, a turtle shell shaped retractable grappling hook, and two slices of combination pizza. No anchovies!

Raphael comes with two sais with red wrapped hilts that don’t have sheaths but tuck into the leather belt around his waist, as well as three x-shaped ninja throwing stars. Unfortunately for Leonardo, Raphael gets a whole box of pizza, instead of just two slices. The best accessory though are removable melded together crossed arms which look to be articulated at the shoulder, so he can move them up or down.

How much are the new DreamEX TMNT 1/6 Scale Leonardo and Raphael figures?

Well, there’s no official price out yet, but the Casey Jones figure in the same line was $199.99, and the Shredder is $219.99. Because of all the cool accessories and star power, I think they’ll be closer to the $219.99 mark. There’s no release date yet, but my guess is it’ll be mid to late 2017. Cowabunga, dude! Pre-orders should be available for Leo and Raph fairly soon.

Check out the turtle power below! 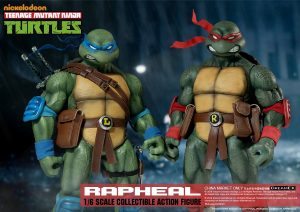 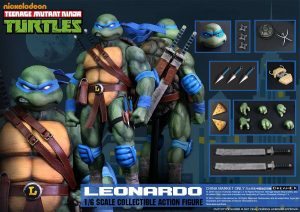 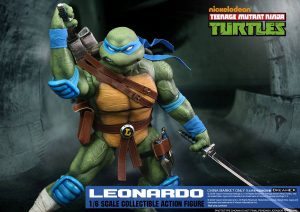 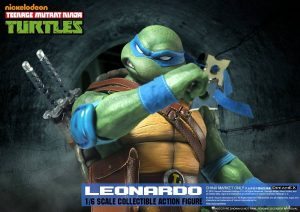 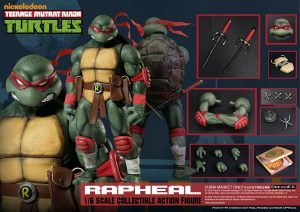 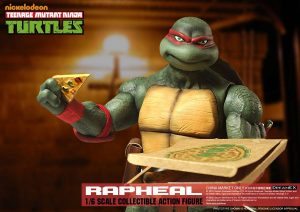 Hawaiian pizza? You bet your shell. 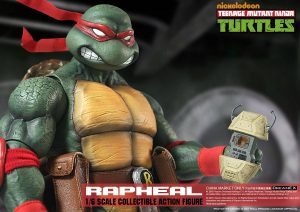