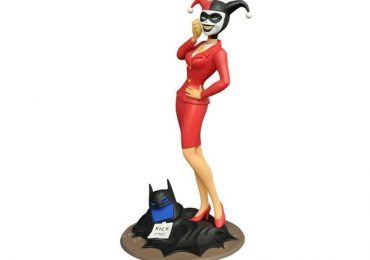 The character of Harley Quinn was created by Paul Dini and Bruce Timm, and first appeared on Batman: The Animated Series back in1992.

This Diamond Select Toys release features Harley as an undercover lawyer from the popular episode “”The Man Who Killed Batman.”

Ms Quinn is posing atop Batman’s cape and cowl, with a “Kick Me” sign stuck to the back.

This 9″ scale PVC figure features collectible-quality sculpting and paint applications and is in scale to all Gallery and Femme Fatales PVC figures. Packaged in a full-color window box.

The product is selling for $39.99 and you can pre-order it from BigBadToyStore.com here: http://www.bigbadtoystore.com/bbts/product.aspx?product=DMC12683&mode=retail

Not familiar with Harley Quinn? Check out this collection of clips from the Animated series featuring Harley:

If you are already a fan of Harley Quinn then you are probably looking forward to her appearance in the DC Studios film Suicide Squad. You can check out more on that upcoming film on our sister site Scifiaddicts.com CLICK HERE.

Harley can also be seen in the web shorts release by Warner Bros “Gotham Girls” and can be seen on warnerbros.com.  One more interesting fact about the character is that Harley was originally not intended to be a featured character in the Batman Animated Series but she was such a hit with the fans that the show brought her back and eventually she earned her place as one of the most memorable and liked villains of all time.