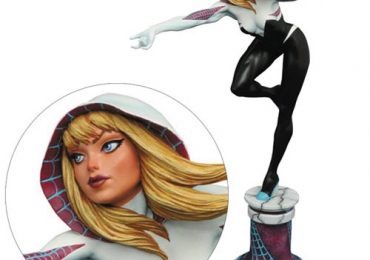 Marvel and Diamond Select Toys are bringing fans of Marvel’s multiverse something to look forward to, with two amazing Spider-Gwen statues going up for pre-order. For those who don’t know, Spider-Gwen is actually the Gwen Stacy, the Spider Woman of Earth-65, that is, she is the main hero there since Peter Parker died. The universe is everything opposite of what you’re used to so check it out while you’re waiting for the statues to be released.

The first statue is a 9 inch (~22 cm) PVC plastic figure depicting Gwen hanging from a wall, which is a base at the same time, with one of her hands pointed in front of her with the famous web shooting hand sign. What is great about this figure is that it perfectly fits other gallery and femme fatale PVC figures released by DST. The price of this great statue will be $45. You can pre-order it on Entertainment Earth here. 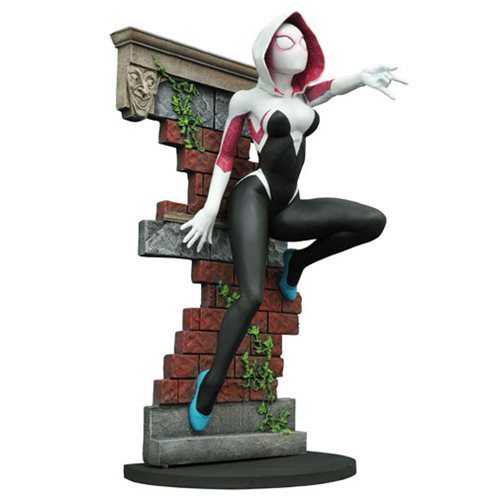 The second statue will be made in higher quality and will be a bit bigger, which also increases the price, of course. Her height will be 12 inches (~30 cm) and the statue will be made of high-quality resin. The statue depicts her standing on one foot pointing in front of herself, also with the web shooting hand sign, and this time, she’s not wearing a mask, just her hood. In addition, it comes packaged with a certificate of authenticity, and will only be made in 3000 pieces. With the size and quality increase, the price also increases, making the total price of this amazing statue $150. You can pre-order it at Entertainment Earth. 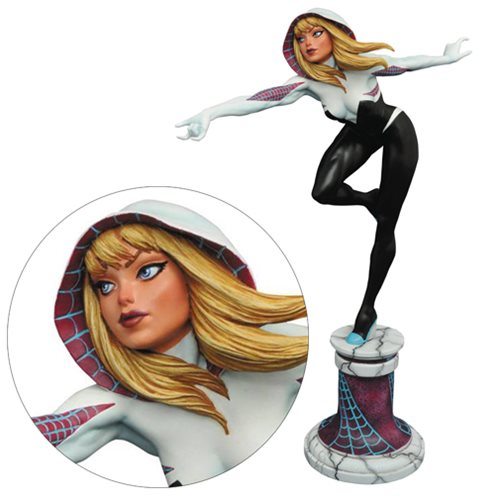 A great thing for collectors is that both Spider-Gwen statues feature a full-color window box, great for displaying. Both statues can currently be pre-ordered on Diamond Select Toys’ webstore with an estimated release date being sometime during fall 2016, or they can be purchased through other online retailers such as Entertainment Earth.