Diamond Select Toys has held onto the Star Trek license for many years and have released model ships, Minimates, props, busts & action figures.

I remember in 2009 when the film came out Playmates had the license and released figures in a 3.75″, 6″ and 12″ lines and they weren’t received well.

Play Arts Kai also toyed with the license in 2014 with their stylized versions of Kirk and Spock from Star Trek Into Darkness.

At SDCC Diamon Select announced and revealed they have the license to the Kelvin universe films which are Star Trek, Star Trek Into Darkness and Star Trek Beyond. They’ll be releasing Select figures from the films and first up are Kirk and Spock based on their appearance in Star Trek into Darkness.

They each come with interchangeable hands, communicator, phaser pistol, rifle, blast effects, and transporter pads. The figures have pretty good likenesses of Chris Pine and Zachary Quinto who play Kirk and Spock respectively. The detailing on the costumes look great too with the quilted look to their tops and the federation logo sculpted on. These figures look truly fantastic. They also feature 16 points of articulation which is standard for Select figures.

Overall I really love the look of these and as a big fan of the recent films, these are must-haves for me. I can only hope that they release the rest of the Kelvin crew and some of the other characters as well such as Old Spock, Nero, Khan, and Jaylah etc. I don’t want this line to get canceled as there’s some great potential here.

Kirk and Spock are expected to be released in February of next year and cost around $25 each. 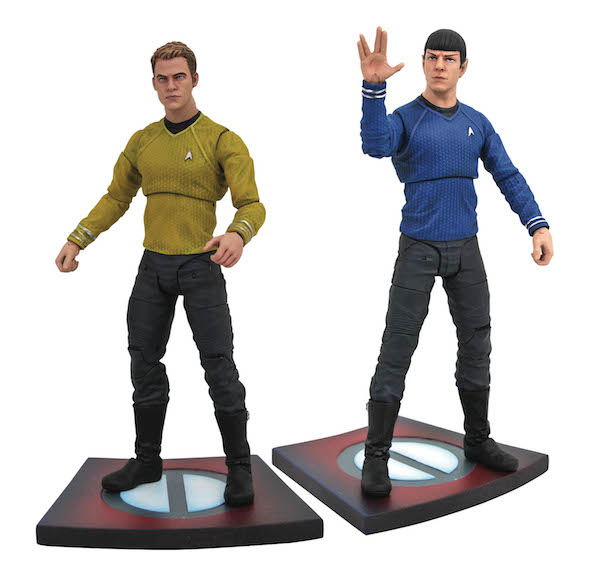