The statue will be made in 1/7 scale making it approximately 9 inches tall (~23cm) and will depict Harley standing in a “fun, relaxed pose”, with one hand on her hip and her iconic giant mallet on her shoulder. The statue is made in high detail, with her clothes consisting of a lace-up top, short shorts, thigh-high stockings, gauntlets, and a short cape. The figure is also painted to comic book likeness, with Harley’s bleached skin contrasting the red and blue details on her clothes, her twin pigtails, and her color-coordinated painted nails. Her iconic exaggerated makeup and bright red lipstick are also featured. A detailed belt is also featured with bullets and blue and red holsters on both sides, with 2 guns inside. A circular specially designed base for exhibiting is also included. 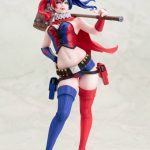 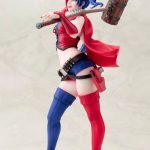 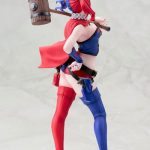 The Suicide Squad Harley Quinn New 52 Bishoujo Statue’s estimated release date is sometime in September, which is great for collectors considering the movie Suicide Squad will be coming out in theatres in August. The statue can be pre-ordered now on websites such as Entertainment Earth for a price of $74.99 and would be a great addition to any collection, especially when combined with other DC characters Bishoujo statues from Kotobukiya such as Batgirl, Zatanna, the Huntress, and Poison Ivy. Since it is currently unknown what the edition size will be, be sure to check Kotobukiya’s Facebook page for more information as it is an official source, so as not to miss out on anything.