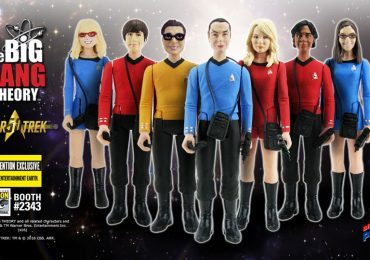 As the San Diego Comic-Con creeps up on us, more and more companies are revealing their exclusives. And while some collectibles seem a little plain, or expected for the Con, other companies are stepping up with some fun and unique ideas. This is definitely the case with the Bif Bang Pow SDCC 2016 exclusives, where they decided to mix The Big Bang Theory with Star Trek: The Original Series.

The figures made are of all the main characters, Sheldon, Leonard, Penny, Raj, Howard, Amy, and Bernadette. All of the figures will be 3 ¾ inches tall and be wearing original series Star Trek uniforms. Sheldon, Amy, and Bernadette will be wearing the blue uniform (with Sheldon having a special resemblance to Spock), Raj, Howard, and Penny will be wearing the Red uniform, while Leonard will be the only one in Yellow. 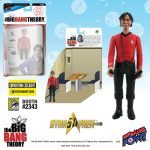 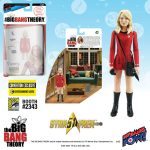 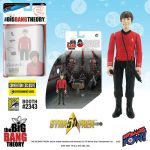 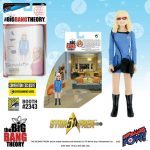 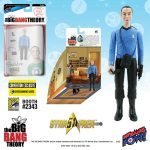 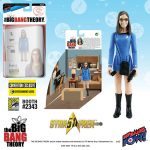 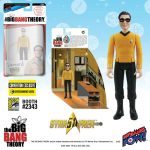 One peculiar thing is that all of the characters will come with their very own Communicator, Phaser, and Tricorder accessories, except for Leonard. What Leonard did that cost him his equipment is beyond us, but maybe the yellow costume is just that much more awesome than red or blue. The figures will feature 5 points of articulation, and come packaged with a pop-out diorama of a unique stage set from the series.

Wait, pre-order? Yeah, well, in keeping with the weird trend of having Comic-Con exclusive items available online, these figures are being made in collaboration with Entertainment Earth, and will be purchasable online throughout July. However, there is a catch. Pre-orders will be processed and items shipped only if the figures remain in stock after the Comic-Con, which means you will receive them sometime in August. The figures will all be limited to under 2500 pieces, and each will cost $14.99. And that’s not bad for a fun action figure like these Bif Bang Pow SDCC 2016 exclusives. All of the figures will be individually numbered with holographic stickers, so be sure to either grab them when you hit the con, or pre-order them online.