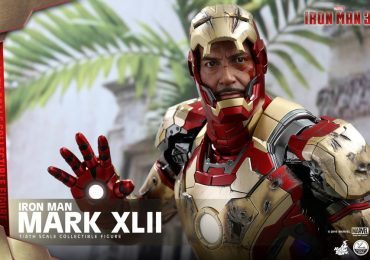 If you thought that the market was getting oversaturated with expensive Iron Man armor figures, you were wrong. At least, that’s the thinking from the fine folks over at Hot Toys. They’ve decided to create a battle damaged Iron Man 3 action figure, based on the Mark XLII seen in the movie. Which, ok, it actually looks really cool. The figure will come in two versions – Regular and Exclusive.

The figures are being made in ¼ scale, meaning you could have a half a meter tall Iron Man in your room (~20”). And as with all Hot Toys releases, it will feature great movement, with over 40 points of articulation. The sculpt boasts an authentic likeness to Robert Downey Jr. During development, Hot Toys wanted to make a great figure showing Iron Man being damaged in battle, giving rise to this figure. However, you can swap out the damaged parts for shiny polished ones if you prefer him that way. Of course, there are numerous other interchangeable items (hands, shoulders) and accessories, even including the car battery seen in the film. 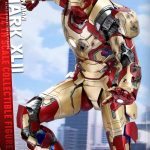 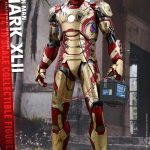 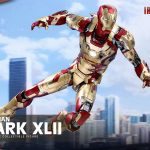 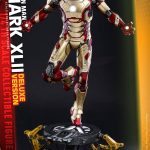 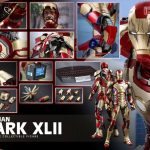 The only difference between the deluxe and the regular version (besides the price difference) will be the base. While the regular one comes with a simple black base for display, and has a swappable LED light up helmet, and LED lights on the armor, the deluxe version also includes a specially designed Arc Reactor-themed figure base with LED light-up function and detachable gantry arms.

The battle damaged Iron Man 3 action figure has been put up for pre-order on Sideshow, Hot Toys official distributor, with the regular version costing $544.99 and the exclusive version costing $574.99.  Big Bad Toy Store also has the exclusive and regular versions available. If you’ve got the dough and the desire, our recommendation is definitely to purchase the deluxe version since the deluxe base is pretty awesome. Both versions are expected to arrive sometime during the first quarter of 2017.