3 Versions of the 1:4 Scale Judge Dredd Statue Being Offered

The Judge Dredd statue is also available for pre-order through Entertainment Earth.

Pop Culture Shock Toys has revealed their latest plans regarding the release of a movie themed Judge Dredd ¼ Scale Statues coming in three versions. Besides the regular version of the Judge Dredd statue, two PCS Exclusive version will also be made, as licensed by Rebellion and 2000AD.

The statues that will be based on the movie Dredd 3D have been made to be 21 inches in height, meaning they are an astounding half a meter in height, with their weight being approximately 20 pounds (~10kg). The movie costume was researched to great extent making it possible to make the statues incredibly detailed and painted to perfection. The “PCS ‘MEGA-CITY’ EXCLUSIVE” version will include an additional ‘comic’ style portrait and an interchangeable raised Lawgiver arm. The second exclusive edition, “PCS ‘COMIC’ EXCLUSIVE”, will be painted to resemble the character as seen in the comics, meaning his outfit would be the iconic dark blue color. This edition will also include the interchangeable raised Lawgiver arm. The statues will include posing bases, the regular and the ‘MEGA-CITY’ version depicting the character standing at the edge of a building, while the ‘COMIC’ version will have the character standing on rubble. 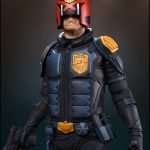 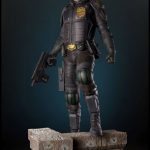 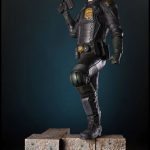 The edition sizes for the different versions of the Judge Dredd statue are still unknown, but what is known is that the regular edition statue will be available through collectible retailers while the “PCS ‘MEGA-CITY’ EXCLUSIVE” and the “PCS ‘COMIC’ EXCLUSIVE” will only be available directly through PCS. The estimated release and shipment date is sometime in the 1st quarter of 2017. They will be priced at $439.99 with an option of payment plans open and up to 10% discount when pre-ordering and paying in full. These statues are the definite collector’s items for any Judge Dredd fans out there and are an absolute must have. Be sure to keep an eye out for more information.